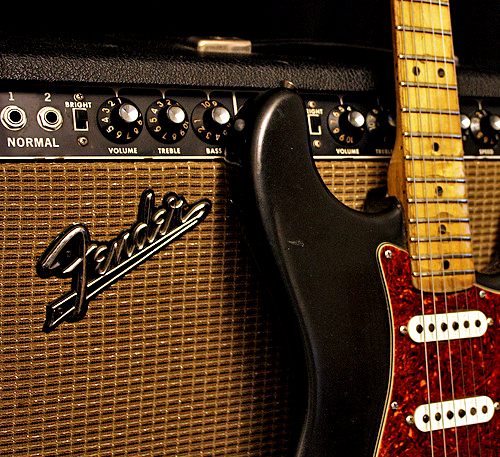 Photo by John Tuggle / CC BY

have opted for a classic Fender Stratocaster or the budget-friendly Squier alternative as instrument of your choice, we know exactly the type of sound you are after. There is a good chance that you’re after the vibe of rock ‘n’ roll giants such as Jimi Hendrix, David Gilmour, Iron Maiden, and other titans.

With that in mind, we delved into today’s market in an attempt to bring you the very top amp for Strats, with the following criteria in mind: sonic edge, raw sound and massive power, ability to control that power, as well as durability and reliability.

We came up with 4 options across a variety of price ranges, any one of which would qualify for the best amp for Strat guitars.

What better way to enhance a Fender guitar than with a Fender amp? We’ll get the party started with one great deal: the Fender ’65 Twin Reverb, which falls nicely into the mid to high range price category.

This amp (see full specs) just screams classic rock. The set of trusty 12AX7 and 12AT7 preamp tubes it packs give it a lot of versatility within that genre, though always keeping true to the bright, screaming sound the pairing is best suited to. Those tubes are definitely the strongest point of the amp. They’re capable of producing a wide range of sonic emotions, and they offer an immensely more raw and powerful sound than the solid-state amps that are more prevalent on today’s market.

The Fender ’65 does clean as well as it does grit. Sure it’s got that fuzz and buzz when you want to push the gain but it’s got a nice sparkle when you want a purer tone. This is what gives it most of its versatility. While the tone’s a rock dream paired with a Strat, it could also do modern country tones or other bright genres just as well.

As far as other stats go, this amp gives you 85 watts of tube power and a set of 12” 8-ohm Jensen C-12K speakers. It has dual channels and four outputs with 6L6 Groove Tubes. As an extra bonus, it gives you an all-tube reverb, one of the hallmarks of a Fender amp and the secret weapon of many guitar icons. It all goes to show that sometimes the best amp for a Fender Strat is another Fender. 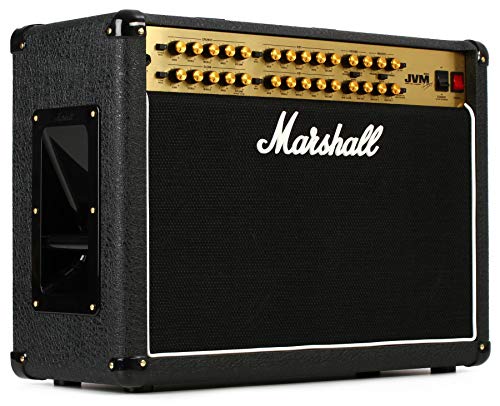 OK, so that Fender got us warmed up, we’re nice and cozy, but it is now time to bring out the fire! And by fire, we mean a Marshall beast known as the JVM410C (see full specs). This premium 100 watt 4-channel guitar amplifier is by far the best item on the list. The other options are masters of their respective price ranges, but this thing is a monster!

It packs a set of two 12 inch Celestion speakers, while offering a choice of four channels – Clean, Crunch, OD1 and OD2. These options secure a notable sonic variety from the get-go, and when backed by other EQ controls, you get sonic paradise.

It is true that every guitar will shine and give its best show when plugged into this Marshall, but it’s the Strat that glows as the brightest star when connected to the JVM410C.

Why? Because of the power it brings to the guitar, of course. Strats are controllable guitars, and this amp is a wild thing. When combined, you will get a roaring savage beast that you can control with your fingertips. A guitarist’s dream, yes. If you can shell out the dough, this is the best amp for Strat guitars period. 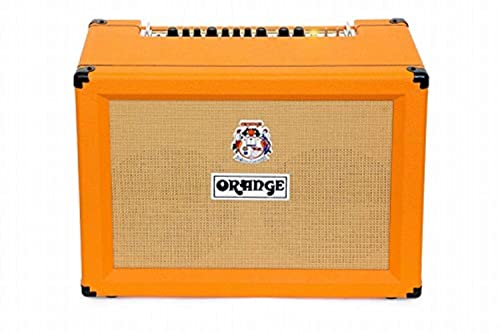 Finally, another relatively affordable quality option and a perfecto solution for a young heavy rocker – the Orange Crush CR120C. If you’re into the likes of Black Sabbath or a similar sort of sludge vibe, you will love this orange box of love.

What makes this fella stand out is that while it’s not as versatile as the Roland, it undoubtedly offers a distinctive rock ‘n’ roll tone that is enough to carry your sonic expression on its own. It’s a bit of a niche market, and if you want to play more than just rock, metal, or heavy blues rock, we recommend the Roland, BUT if you’re a rock ‘n’ rollin’ man, this is your winning ticket. 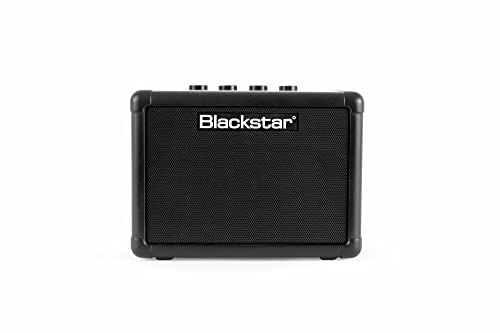 If high-end Marshalls and Fenders are a bit out of your price range, you don’t have to fret! You can still get an awesome amp that perfectly compliments the sound of your Strat in the budget range if you know what you’re looking for. This Blackstar combo amp is the perfect choice if you want an amp that’s both affordable and super-portable.

Blackstar amps are beloved by metal players because of their impressive output. Now you won’t get a huge sound from any amp this size—at just 3 watts, it’s a bit thin on the low end of the spectrum, especially. It gives you a lot more volume than you’d expect for the size, though, and the punch and resonance are impressive.

The tone control options on the FLY3 are also a lot more extensive than you’d expect from a compact amp. This includes features you definitely wouldn’t expect for the price, like a tape delay and the Infinite Shape Feature for getting your ideal tone. It’s also one of the few amps with a legitimate battery-operation option—great if portability is a serious concern.

We’ll admit this amp won’t give you the big sound of a more expensive amp. If you’re looking for maximum value, though, you’ll definitely find it with this adorable little amp from Blackstar.

Is This the BIGGEST Sounding Small Guitar Amp?

What Makes a Best Amp for Strat?

As noted, Fender Stratocaster is a guitar you can control without too much hassle. It’s a precise instrument, typically consisting of three single-coil pickups. So what you need is an amp that will bring out the inner beast of the Strat and express the type of vibe you’re after.

The best option are tube amps, because pairing up the guitar with the raw fuzz of those devices is a match made in heaven. Some solid-state amps can work too, and we believe that the two latter options on the list are hitting that sonic soft spot as well.

Finally, look for a device with a quality on-board chorus or delay effect, those were outstandingly well when paired with a Strat. Now, jot down your budget, buy one of these bad boys, and get playing. Even the best amps for Strat guitars are worthless without a man (or woman, let’s not get sexist here) to make magic with it!