Photo by Kamal Aboul-Hosn / CC BY

in your kit is the heartbeat of your band. It needs to be loud enough to cut through the rest of the sound, but it also needs to have enough definition on the front end of the attack to keep the groove going and help your bandmates find the beat. Choosing the right beater head for your kick drum can go a long way toward getting the ideal balance of clarity and volume out of your bass drum sound.

A lot of drummers will add blankets, pillows, or other dampening materials into the body of their drum to help muffle unwanted overtones, but it’s ultimately more effective to invest in a drumhead with built-in overtone dampening so that you can count on a consistent output from your bass drum every time. Heads that have removable or adjustable muffling rings could be ideal for drummers who play a lot of different styles or gig in a wide variety of settings, letting you tailor your bass drum sound to the acoustics of the space and the demands of the music.

Below are our recommendations for the 4 best bass drum heads on the market: 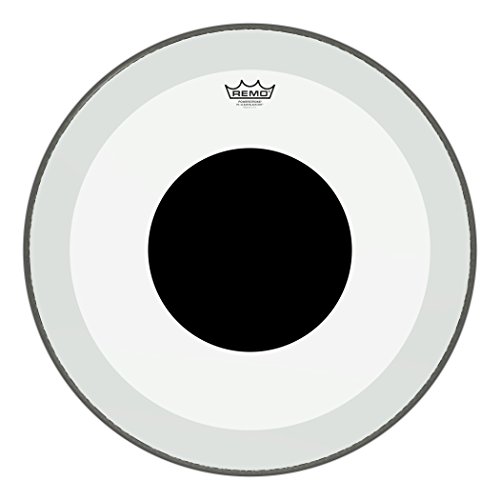 The Remo Powerstroke is a favorite across the drumming community and with good reason. It’s not only an extremely durable head but it will give you a fuller, fatter sound than most beater heads. The underlay around the outer edge acts as an extra layer of dampening, filtering out unwanted overtones. The extra five mils of width from the black dot in the center adds some depth to the low end and gives you a punchier attack. The thud and power from this head will kick your bass drum sound up to the next level.
ULTIMATE Remo Bass Drum Head Comparison - Timpano Percussion 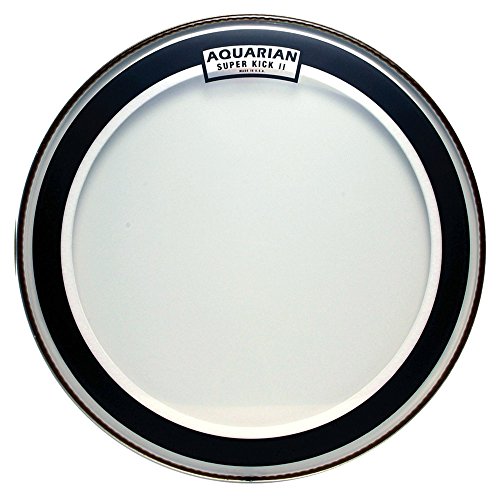 The floated muffling system is what really defines the sound of this head. The narrow ring of soft felt along the outer edge means you won’t need to add any extra muffling material to get a deep, punchy kick drum tone. The head is 2-ply for maximum durability and volume. Aquarian heads last longer and resonate better than many other brands on the market because of their quality of construction. Though they’re great for any style of play, they especially excel at the driving low-end that’s so necessary for genres like metal and hard rock.  These are among the best bass drum heads for the money. 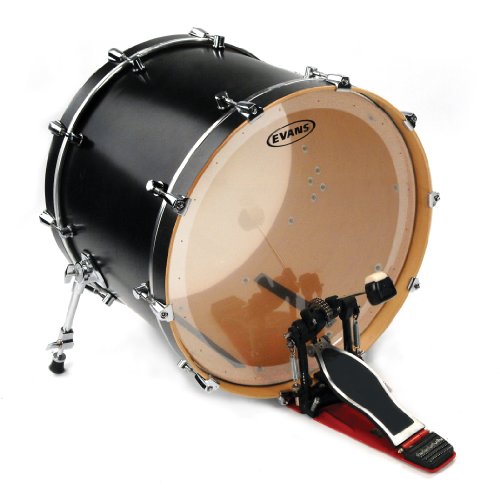 The EQ2 is a 2-ply head that’s built to last. The internal overtone control ring gives the sound more depth and a more defined attack. Add or remove the muffle ring to alter the response on the low end. The focused sustain and powerful projection means this head (see full specs) is fantastic for live performances, but it also plays nice with recording mics, with a warm and rounded sound. The EQ2 has a livelier sound than the two beater heads above, and you’ll get the low boom and snappy attacks that are great for high-energy styles. 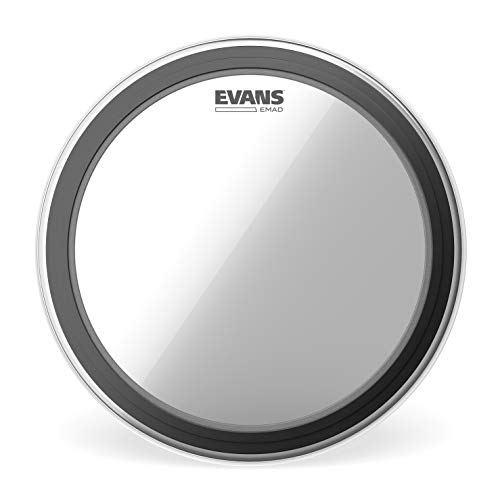 EMAD is the gigging drummer’s head of choice, both because it’s so versatile and because it’s surprisingly affordable, giving you great bass drum sound for the price of a snare or tom head. The removable dampening rings let you adjust your sound to suit the venue and the style that you’re playing. Use the thinner ring to get a more focused sound or pick the wider one when you really want to add power to your low end. Though it’s a single-ply head, the relatively thick 10 mil film is durable enough to stand up to even the most aggressive play.  It should be on anyone’s list of the best bass drum heads.
Evans EMAD Bass Drum Test

The construction element that has the biggest impact on your bass drum tone is the number and thickness of the sheets of film used on the head. A single-ply head will have a quicker response across dynamic levels and will have a better overall resonance. This can make for a brighter tone with a longer sustain, and may be better for players who use a lot of soft dynamics. The most obvious advantage of a two-ply head is its increased durability. If you use a heavy strike, you’ll be able to play on a two-ply head for longer without damaging it and needing to replace it. Two-ply heads also tend to have a punchier attack and a slightly darker sound than their single-ply counterparts.

The thickness of a drum head is measured in mils. One mil is one-thousandth of an inch, so we’re talking about very minute differences in the thicknesses of different drumheads—though those small differences can have a big impact on the overall sound. The thinner the material you’re striking, the higher the pitch of the sound will be, which makes the sound brighter and more cutting. A thicker drum head makes for a lower pitch and a darker tone. When it comes to two-ply heads, a lot of manufacturers will use a thinner ply on the beater side of the head and a thicker ply behind it. This lets the beater strike the material that will give it the most attack power while still getting the full tone and durability that a thicker ply provides.

Some of the best bass drum heads (like the Powerstroke 3 [see full specs]) add an extra circle of material in the center of the head where the beater will strike, referred to as a “dot.” This can serve as a kind of compromise between the single- and double-ply head styles, reinforcing the head to make it more durable but allowing the outer ring to resonate more freely. Single-ply center dot drumheads will have the dark tone of a two-ply head but with a longer sustain.

There’s more to the finish of a drumhead than its aesthetic appeal. Any alteration you make to the skin of a drum will affect the way the sound waves are generated, and in turn will alter the tonal characteristics. Clear heads are the most common in resonant-side (bottom) heads; when used in the batter position, they give you more definition on the attack. The downside of clear heads is that they can produce more unwanted overtones and can sometimes sound too bright, especially for jazz players. A coated or frosted head will give you a warmer, more rounded sound overall.