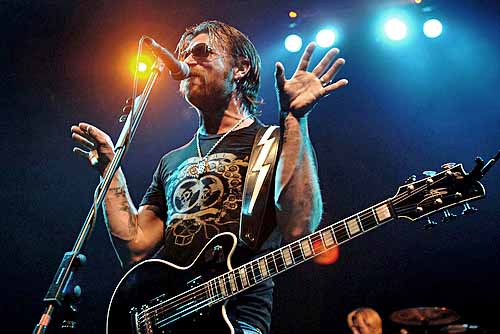 Photo by Rogelio A. Galaviz C. / CC BY

spend time figuring out the right death metal pickups? Well, non-metal musicians think that death metal is all about noise and random notes, but the truth can’t be further from that. Death metal guitarists are total geeks when it comes to tech stuff, and picking the appropriate pickup set is all but easy. Let’s see which death metal pickups are the best then afterwards we’ll discuss what makes the top pickups for this particular music genre. So, without further ado . . .

Here are our reviews of the 4 best death metal pickups on the market: 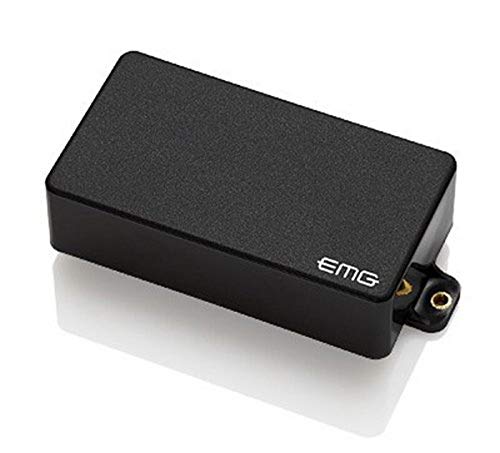 EMG’s 81 humbucker pickups are among the most-frequently used pickups when death metal musicians are in question. They’re made of a mixture of ceramic and steel, 10 kOhms of output impedance and 80 microamps of current power (at 9V which is considered as a standard).

One of the main reasons why metalheads like these pickups so much is because they pack quite a punch. Some even go as far as stating that “they’re exclusively built for metal,” which appears to be correct, in a sense. In a nutshell, the EMG 81 represents a quality-sounding pickup set which boasts enormous value for the cash. 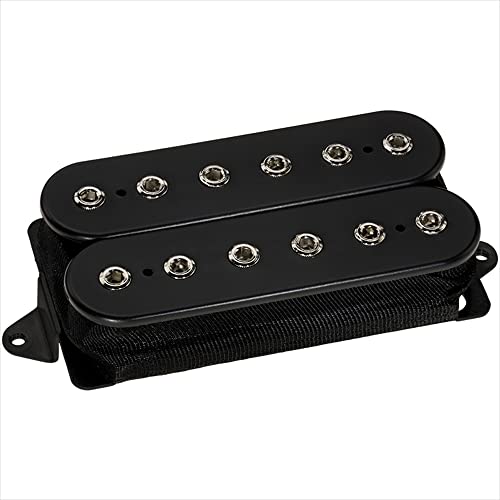 DiMarzio’s LiquiFire humbucker is extremely good for the price. It features four conductors of wiring across a ceramic magnet’s surface, and works good regardless of where you put it (neck or bridge).

These pickups have over-pronounced attack with a lowered “voice” (see full specs), so your rig should ideally be set at the following EQ settings for the best results – treble at 4.5, mid at 7.5, and bass 6.0. Overall, the LiquiFire is a strong, heavy pickup set that comes surprisingly cheap given their real value.

One of the most famous metalheads that used these pickups was Petrucci from Dream Theater – even though he’s not a death metal guitarists, you can rest assured that there’s plenty of gain and drive in these majestic contraptions if one of the tech masters opted for them. 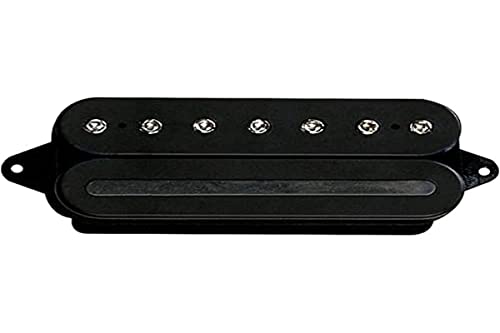 Much like LiquiFire, DiMarzio’s DP708BK Crunch Lab is a nasty little pickup set. They have quite a lot of features in common, such as the ceramic magnet build, four conductor wiring setup and DC resistance, but they offer more clarity when combined with a high gain guitar sound.

Some death metal musicians refer to DP708BK as “weak” since they’re passive pickups by nature, but we beg to differ. Combined with a proper EQ setup, these pickups could easily empower your death metal riffs with their controlled “muddiness” and gainful resonance. They come at a reasonable price, so make sure to check them out if you haven’t yet. 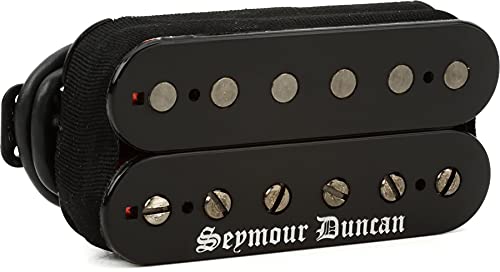 The last death metal pickups in this review come from Seymour Duncan. The “Black Winter” was specifically built for metalheads, as they’re a powerhouse in a small package.

You might get the feeling that these pickups (see full specs) were designed for black metal, which wouldn’t be completely inaccurate. Namely, these pickups do well for all kinds of extreme metal sub-genres, death and black metal in particular.

Generally, it’s EMG or Seymour Duncan with metalheads – EMG got a fine selection of budget active pickups, Seymour boasts a broad catalogue of brutally powerful, versatile magnets, but even so, the Black Winter tops everything you’ve used so far. These are specialized metal pickups that are not to be underestimated – certainly not for the faint of heart.

Pickups are, basically, magnets that are tightly wired, but not every model features the same build material. The earliest versions were made of steel and metal – these materials are outdated, and even though they did quite a good job, their over-sensitivity to magnetic shifts made them quite unreliable.

After the metal-era was done, ceramic and silicone-based pickups came into play. These were quite handy at the time they were introduced to the stage, but they’re not particularly good for metal sub-genres, as they tend to sound a bit fizzy (good for overdrive, bad for distortion).

Nowadays, most brands make pickups using ceramic materials. The logic behind such a radical move is quite simple – ceramic materials react very positively to all kinds of magnetic shifts and frequency currents, so it’s safe to assume that they’re most reliable.

Every pickup features a set of magnetic pole-pieces that (ideally) align with guitar’s strings, but the thing you should consider is the pickup type. There are single-coils that are very easy to install but lack the power you need, dual-coils that sometimes suffer electric interference (if you pump up the drive too much), and lastly, there are humbuckers that (nearly) completely eliminate the fuzz.

Single-coil pickups are pretty popular among metal musicians, although most death metal guitarists refrain from adding them to their gear since they buzz a little and sound a bit muddy.

Dual-coil magnets (note- humbuckers are also dual-coils but they’re a bit different and are not to be confused with the former) are practically ideal. The amount of “buzz” generated through frequency shifts works like a charm when combined with a heavily distorted sound, so it’s safe to say that this is your best bet.

Last, but not least, certain death-metal subgenres that feature technical, clearly audible solo passages could greatly benefit from a humbucking pickup in the lineup. Namely, they cut the interference short, leaving you with a rich distortion and lower gain.

The first pickups ever built were passive, and they were quite plain in all aspects. Namely, these were magnets coiled with heaps of wire. Some metalheads use them, but they’re not particularly good for death metal.

Active magnets, on the other hand, feature active preamps built into the circuitry which significantly boost the strength of the signal and the equalizer. That means that your gain and distortion will get even more distorted, meaning that your sound will be heavier and deadlier.

The reason why death metal players should consider the price of their pickups is because there are cheap pickups which could do the trick and expensive pickups which can’t even begin to compare with the former.

It’s quite strange that big heads such as EMG and Seymour Duncan sell a plethora of low-end pickups, but they’re usually good for different kinds of music, not death metal in particular.
Simply put, if you want the best pickup set for death metal, you should be prepared to pay top dollar.

Figuring out how pickups work and how to pick your first set comes hard – “the tech talk” appears a bit too scientific, and you’d need a PhD in physics to understand but a fraction of what’s underneath the surface. Regardless, we hope that our little buying guide gave you the “heads up” about where and how to search for your pickups. Good luck!

5 Types of BLACK METAL Guitar Riffs and How To Play Them!