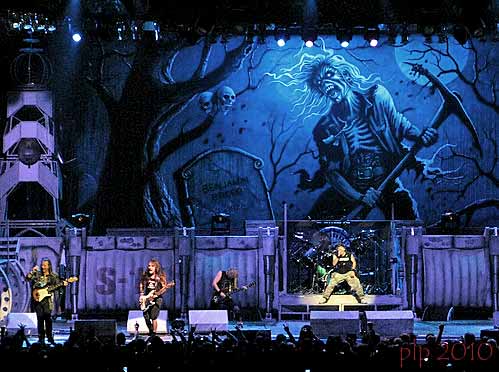 Photo by Pepe Avila / CC BY

Heavy metal is the genre of choice of many guitar players out there, and also the gateway to guitar music in general for much more people than you might think. So if you’re a beginner guitarist or a seasoned veteran looking to brush up their metal knowledge, we present you with the seven heavy metal songs to learn on guitar. Let’s dive in!

Iron Man is a staple in heavy metal history, and its opening riff is arguably one of the most iconic classic licks ever composed. Even though Tony Iommi’s playing style is impossible to recreate, the riffs of Iron Man are decently simple. Despite their simplicity, they’re also equally powerful as they are interesting and entertaining to play.

This is one of the songs that sky rocketed Sabbath’s career, and it’s the tune that up-and-coming bands practice before starting to write original material. Needless to say, having Iron Man in your pocket will help you get into any heavy metal group more easily.

Overall, the guitar work is this tune is relatively straightforward, although even intermediate level players may struggle to nail its solo down. Black Sabbath’s Iron Man is a timeless classic that will certainly remain as fun and relevant in decades to come.

While Black Sabbath is one of the founding fathers of heavy metal, Iron Maiden, alongside Metallica, carried the torch and became the flagbearers of one of the strongest, most melodic, and heaviest genres of music.

This band has had numerous classic hits, such as Wrathchild, Run to the Hills, and, obviously, Fear of the Dark, but Aces High stands on top of these iconic tunes as it encompasses everything an iconic metal act should stand for.

It’s fast-paced, the guitar harmonies are absolutely gorgeous, the riffs are well-orchestrated and executed to perfection, but more importantly, the tune also carries a bit of history in itself, as well as being a powerful statement in and of itself.

Though Aces High may not be the easiest heavy metal song, it’s remarkably rewarding for guitarists who manage to play it all the way through. It’s unusually long for an up-tempo heavy metal track being roughly five minutes long, but the riffs repeat quite often. It’s an essential song to have under your belt if you intend on joining a heavy metal band.

Machine Head leads the second heavy metal revolution and is to this day one of the biggest names in the metal genre. Despite numerous fans trying to classify them as nu-metal, their riffs, lyrics, vocals, and drum figures are unequivocally heavy as a ton of bricks.

Locust is a remarkably well-composed song, featuring a powerful chorus, a melodic pre-chorus with beautiful guitar harmonies, a beat-down styled breakdown, bits and pieces of clean electric guitar parts, and an exquisite guitar solo that may give you some troubles if you aim to learn it note for note.

What makes this track different is the fact that it has quite a few licks you’ll have to memorize. Locust is fairly demanding technique-wise, but it’s certainly not the hardest track in Machine Head’s catalog.

The gratifying feeling of managing to navigate your way through all the riffs for more than six minutes is irreplaceable, and it’s definitely worth having in your arsenal.

Just like Machine Head’s Locust, Iced Earth’s Damien is comprised of numerous guitar riffs, a healthy dose of repetition, and you’ll probably need to listen to it quite a few times before you memorize all the chord progressions and changes.

Fortunately, there are no key and tempo changes, and you’ll have around a minute of time to relax and compose yourself when it reaches the bass solo section.

An epic solo follows right after the spoken-word part, before the song shifts gears back to the leading verse. If you’ve memorized the licks so far, you’ll just have to repeat what you’ve learned, and you will have learned how to play Damien.

Primordial is a band that seamlessly blends history, heavy riffs, captivating guitar harmonies, and a one-of-a-kind vocal of Alan Averill. This band dabbled in black metal and folk metal across nine-plus albums they’ve released so far, but they’ve remained heavy in all respects.

Where Greater Men Have Fallen is a heavy metal song (or war chant of sorts), featuring stunning melodies right atop one of the heaviest riffs ever written in the verse.

It shouldn’t be a surprise that the verse of this song is strong enough to bend steel, just like the lyrics and Alan’s vocals are powerful enough to command entire arenas crowded with thousands of people.

Sanctuary was formed back in 1985 after which it endured a few lineup changes. Even so, they remain one of the strongest power heavy metal bands of the Seattle scene.

Question Existence Fading immediately captivates with the opening riff, but the real surprise it offers is the vocal of the late Warrel Dane. Even though it’s not the most famous heavy metal song in the world, this track is stunningly beautiful and its guitar work is as unique as it is melodic.

Learning it will help you develop a stronger sense of melody and harmonies, but you’ll also be able to surprise a few people by playing some of its licks at band practice.

All for One is a classic heavy metal song that took the best Judas Priest, Iron Maiden and Metallica had to offer, melded it together, and finished it with Ralf Scheepers’ signature vocals.

This track starts off with beautiful clean-guitar intro before going full-force into the main riff. However, the centerpiece of All for One is the mesmerizing chorus.

In terms of skill and technique, All for One is an intermediate heavy metal song. Talented beginners may be able to learn some of its licks while seasoned veterans may need a few minutes figuring out the breakdown harmonies and licks.