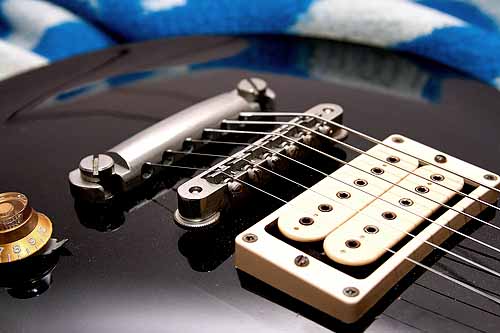 Photo by Daniil Ulanov / CC BY

Paul—named for its creator and originally released by Gibson in the early 1950s—is one of the most iconic instruments in the history of popular music. It was designed to eliminate the feedback that plagued hollowbody electric guitars when their players pushed the volume and gain. The switch to a solid wood body design eliminated this feedback problem, allowing guitarists to play harder and louder than they could before. Its use of a Florentine cutaway also provided easy access to the higher frets, facilitating the screaming solos classic rock guitar is so known for.

Every detail of the ESP Limited EC Series guitars is carefully designed to give you the power and tone of a classic Les Paul, updated with the best modern musical technology has to offer. It uses a TonePros locking bridge and tailpiece for absolutely solid intonation, play after play, even if you like to use a relatively low action.

These guitars (see full specs) also give you two options of pickups: Seymour Duncan passive humbuckers or EMG active single-coil pickups. Each brings out different qualities of the guitar, which uses mahogany and flamed maple as its tonewoods. It’s lightweight, easy to play, and can deliver all the gain and crunch a Les Paul does so well. This should easily be on the list of the best Les Paul copies. 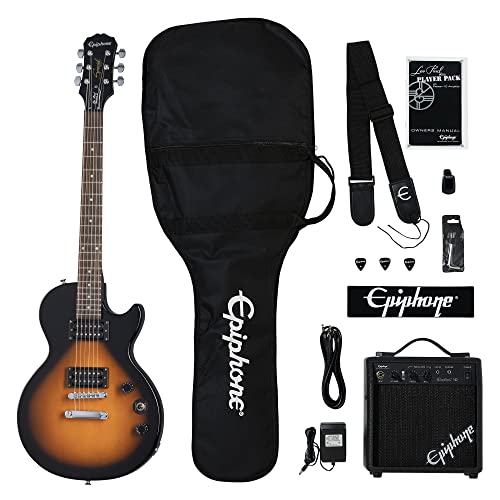 Epiphone is basically the more affordable side of the Gibson line. If you’re looking for a Les Paul copy that’s both high-quality and a good value, there are quite a few great options in their catalog. This one especially caught our eye in terms of value. You’ll get a gig bag, amp, and all the accessories you need with the guitar.

The actual guitar is the Les Paul Special-II LE. In terms of build, it uses the classic Les Paul shape, humbucking pickups, and sunburst finish. The bolt-on maple neck has a rosewood fretboard and gives you a smooth, easy action. The sound is great, too, and it has the same style of bridge and tailpiece you’ll find on costlier Les Pauls so your intonation will stay solid while you’re playing. Without a doubt, this is one of the best Les Paul copies for the money.

If some of these guitars seem a bit out of your budget, don’t worry. You don’t have to spend a ton to get a great Les Paul copy. The OE20G from Oscar Schmidt is an excellent example of a guitar in this style that’s affordable without compromising on sound or build quality. The aesthetic details are on-point, too, especially with the eye-catching gold lacquer on the model linked to here.

The OE20G uses a classic dual-humbucker pickup configuration with a 3-way selector. Rounding out the electronics are dual volume and tone controls. A lot of people just assume they’ll have to swap out the factory pickups that come on a cheap guitar, but you’ll definitely want to give these ones a listen first. They have a nice balanced sound across the range and the tone is silky smooth with a rich sustain.

The hardware is solid, too. It has a stop tailpiece and Tune-O-Matic bridge, a common combination for modern guitars since it helps prevent your strings from slipping out of tune while you play. It definitely outplays other cheap Les Paul copies, easily making it among the best cheap Les Paul copies you can buy (“cheap” only in terms of price, not quality) 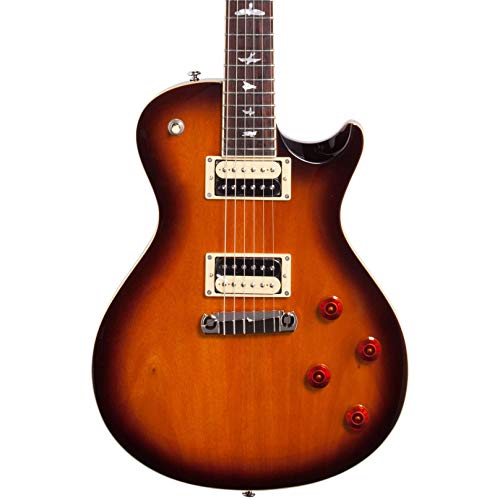 If you’re a Les Paul traditionalist but can’t find (or can’t afford) a vintage Gibson, check out the SE 245 from Paul Reed Smith guitars. It has a shorter scale length, at 24 ½” with a relatively wide neck, making it comfortable and familiar for traditional players. The individual components of the instrument are all designed in-house, specifically crafted to work harmoniously together, including the humbucker pickups, the tuners, and the bridge. The cutaway is less pronounced than on many Les Paul models, giving the guitar’s overall shape a more subtle profile, that’s complimented by the bird inlays and nickel hardware. Overall, you’ve got a modern Les Paul for the vintage lover that looks as beautiful as it sounds.
PRS SE245: Jay Bartlett of Counterpoint (HD)

One of the Les Paul’s unique selling points when it was first released—and one of the characteristics that defines the Les Paul body shape—is its Florentine cutaway that made it much easier to play higher, faster lines. If you’re looking for a Les Paul so you can play this kind of shredding solos, pay close attention to the action of the instruments you’re considering.

While you can adjust the action after purchase, not every guitar will sound as good when you lower the action from its factory settings. The point at which the action is so low it creates unwanted noise and distortion is different depending on how the instrument is constructed, so if this is one of your priorities in a new instrument, check out guitars that come with the action set relatively low out of the box.

The length of your arms and fingers could also play a factor in how comfortable an instrument is for you to play. If you’re of a smaller stature, a shorter scale length will make it more manageable to reach all of the frets. If your hands are on the small side, a thinner neck can keep the muscles of your hands from having to work as hard, extending your practice time. Conversely, players who have larger hands could feel like their fingers get in each other’s way on a guitar with a slim neck; the wider neck of the Paul Reed Smith (see full specs) will likely feel more natural.

Where the tonewoods in an acoustic guitar have the largest influence over its tone, in a solid-body electric guitar the pickups have more influence over the tone color than the type of wood used in the construction.

The original Les Pauls came with P-90 style single-coil pickups, but Gibson switched to using PAF-style humbuckers relatively early in the guitar’s history, so it would be hard to call one more traditional than the other, though they do certainly bring out different tonal qualities.

P-90 pickups are generally brasher, while humbuckers will give you a darker tone and are quieter, without the audible hum of single-coil models. Each type has its adherents across musical genres. If you’re not sure which style is right for you, find out what kind of pickups your favorite players use; it’s most likely to match your ideal style.

The individual components of the pickups will also affect the sound. When it comes to pickup magnets, there are two broad categories of commonly-used components: Alnico and ceramic. Within these broad categories, though, there are subtle variations depending on the ratio of metals. The style of winding on the poles, the gauge of the wire, and the material used in the casing are some other factors that will influence the signal that gets sent to your amp. Some of these alterations will be subtle, but when you narrow down your search to a single guitar style—such as the Les Paul—thinking carefully about which pickups you choose will ensure you get exactly the tone you’re seeking.