Photo by Christopher Andrews / CC BY

Rotating Speaker has got to be one of the most unique cabinet designs ever created. The sole idea behind it is genuinely impressive and was the creation of one man—Donald Leslie. Even though it was intended to be used with the organs, it was just a matter of time before guitar players around the world saw the potential of this cab. Eventually, Leslie sold his company to CBS, which in turn sold it to Hammond, which is why some folks these days call Leslie pedals, Hammond pedals (we use the name interchangeably here).

These days you will find few brands that still produce Leslie cabs, but there is a more practical solution: Leslie simulator pedals. These pedals were created to emulate what Leslie rotating speakers did mechanically.

There are analog and digital versions of these pedals, and most of them get the core of this effect right. If you are looking for one of these units for your pedalboard, you are in the right place. We did some digging, and we have found 4 of the best Leslie pedals around. We chose these based on how accurately they emulated the Leslie experience and their overall quality. Without further ado, let’s get started. 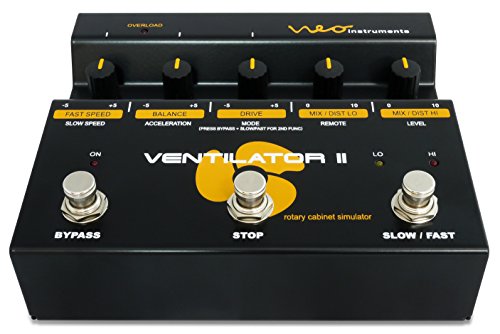 The Ventilator II from Neo Instruments is arguably one of the most faithful representations of an authentic Leslie cab you can get from a stompbox. True to the original, it’s designed to work with both guitars and keyboards. It gives you a clear, warm, vintage tone that stays true to the Leslie character, even in overdrive, which is often lacking in simulator pedals.

The Neo Ventilator is a beast of a pedal. It’s solid, first of all, with a sturdy aluminum construction on both the casing and the footswitches (see full specs), and can stand up to a lot of stomping without letting you down. But it is also a large pedal, at least twice the width of simpler pedals. One of the reasons for this expanded footprint is the array of customization options it gives you. Along with the three footswitches (bypass, stop, and slow/fast) there are five additional recessed controls for tweaking the speed, balance, and mix of the effect.

Sonically, the Ventilator is especially impressive when used with a guitar. You can turn off the speaker simulation to use the pedal with your usual amp. The smooth, lush quality the Ventilator adds to your sound is a near-perfect emulation of a vintage wooden cabinet, even if your amp is more modern and utilitarian. The sheer power of the sound is worth the extra space. If you’re looking for the truest, best Leslie pedal on the market, the Ventilator is your answer.

When a certain effect, especially one as unique as Leslie, gains some traction, you can bet that Electro-Harmonix is going to deliver their version. Lester K is a no-nonsense stompbox that achieves a pretty great Leslie effect at a reasonable price and outstanding quality. The whole thing is packed into a standard Electro-Harmonix enclosure that we are all familiar with.

In terms of controls, you get the most important ones along with the speed/brake footswitch. It’s not covered in knobs like the previous two pedals, but what you get is more than enough for you to dial in anything you want. Performance you can expect is on par with many premium boxes on the market. Even though Lester K was designed to be used with keyboards, it’s a more than suitable for guitars. 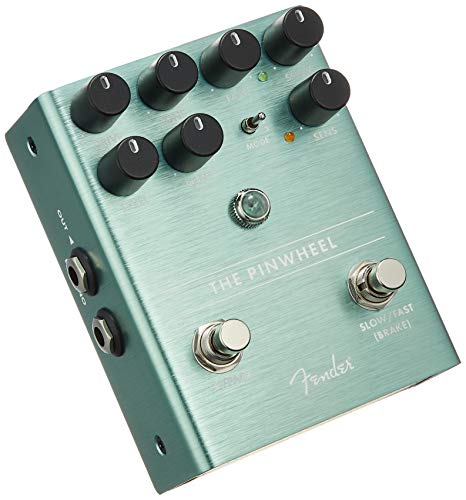 If you want to have a lot of control over your tone, you’ll want to check out Fender’s version of the Leslie pedal effect. The Pinwheel Rotary Speaker Emulator is a beast of an effects pedal that offers three different voicings, as well as an onboard overdrive. You can get more tonal textures out of this stompbox than you could hope to achieve with a smaller unit.

Our favorite control on The Pinwheel is the sensitivity adjustment. This lets you determine the intensity of the effect based on dynamics. There are also controls for speed, drive, and tone. Even better, this is a versatile pedal, with a voicing switch option for either guitar or keyboard.

The downside of The Pinwheel Rotary Speaker Emulator Pedal is similar to other options on the list. It’s a massive pedal size-wise, and it’s not exactly a budget-friendly option. Considering the range of controls it gives you, though, it’s definitely worth the space and the price. It’s a long-term investment, too, with a durable anodized aluminum chassis and Fender original circuits—basically, it’s built to last inside and out. You are going to have a hard time finding a better Leslie emulator for this type of money. 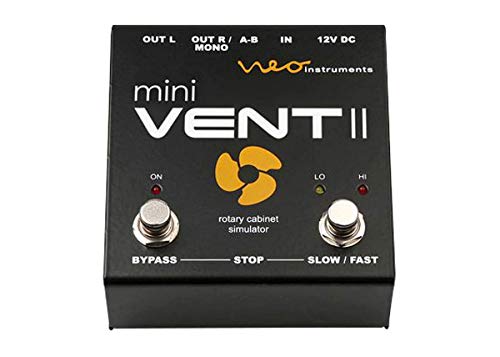 Here’s another one from Neo Instruments that you’ll especially want to check out if you need a new pedal but don’t have much space on your board. This is the smallest Leslie pedal you’re likely to find, about half the size of the Neo Instruments Ventilator above. Along with the simple design, this makes it easy to set up and use.

There aren’t a lot of effect customization options on the Mini Vent II. It does one thing and does it well. You can change the speed of the effect, but otherwise there’s only a footswitch to activate the true bypass. This is part of what we meant by simple design, though—the fewer settings there are to play around with, the less you have to worry about when it comes time for the gig.

The only hesitation we had looking at the Mini Vent II was whether or not it’s worth the money. It’s still cheaper than buying an entire new cabinet, of course, and the authenticity of the sound is spot on. It’s up to you whether you’re willing to the dough in a super-realistic Leslie rotating effect. Still, this is among the best Leslie pedals around.

The pedals we have shown you are among the best Leslie pedals you can get these days. We went with products which sounded authentic and tried to find a representative from several price ranges all the way down to the affordable ones.

For the most part, no matter which one you go for, you will get the performance you need. Some like the Leslie pedal will undoubtedly be as close as you can get to a real rotating cab, but each of these has its own unique character. Give them a whirl!