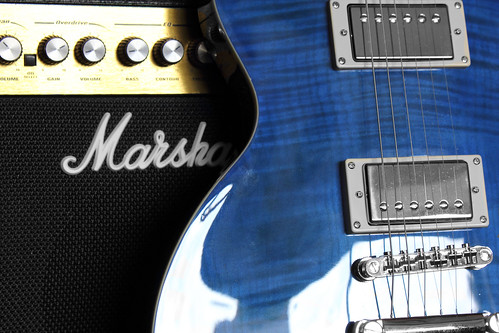 Photo by Arnaud Abadie / CC BY

and Blackstar—if you’re looking for a classic British amp tone, odds are you’re looking to buy one of these two. The companies share a similar aesthetic, both in terms of sound and design. And there’s a very good reason for that: Blackstar was founded by former Marshall sound engineers in 2007, nearly 50 years after Marshall started in the early 1960s.

Despite the obvious similarities between these two companies, there is more that differentiates them than just the length of their history. If you’re deciding between a Blackstar and a Marshall for your set-up, read on below to learn where each of these amp brands excels and what separates one from the other. Only then will you know who’ll win in the Battle of Blackstar vs Marshall.

Founded in 1962 by drummer Jim Marshall, Marshall Amplification quickly became synonymous with the British rock guitar sound thanks to its use by notable musicians like Pete Townshend of The Who. Marshall produced only tube amps for about the first three decades of their existence. Though they now employ solid-state technology in some of their beginner and intermediate-level amps, they’re by and large known as a producer of high-end tube amps even today.

Marshall has remained one of the most popular amp manufacturers throughout its 40-plus year history. While you will find a good amount of variety in their catalog, they’re best-known for amps that have a vintage-inspired tube sound. This makes them particularly popular with players of classic rock, jazz, and other genres that utilize clean tones or light distortion. 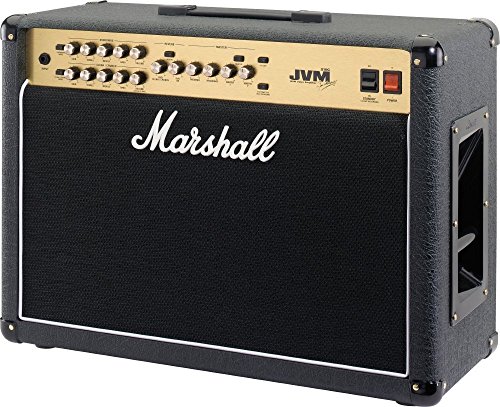 When it comes to modern Marshall amps, the JVM series is the top of the line. These powerful, high-output amplifiers give you the iconic sound of a vintage Marshall with the modern touches that make it more versatile and reliable than the amps of old.

The JVM210 (see full specs) linked to here is an all-valve 2X12” cabinet powered by a 110-watt head. It has two independent channels, one for clean tones and the other for overdrive. Each channel also gives you three separate modes, which are linked to the include footswitch for easy on-the-fly changes.

This is a feature-rich amp, as well. It has an independent 3-band EQ for each channel, as well as digital reverb, two FX loops, and controls for resonance and presence. The included programmable footswitch is just the icing on the cake. 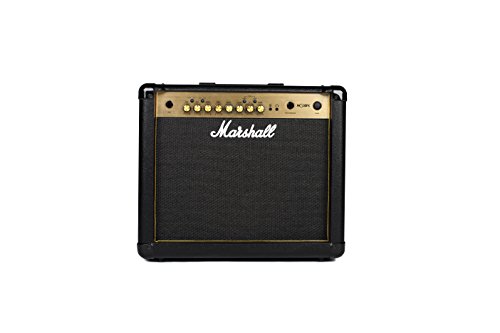 If you want a Marshall but you’re on a budget, their MG line of combo amps are a great way to get the classic Marshall sound and build quality for just a fraction of the price of their full valve amps. The MG30GFX-U is a 1x10” amp with 30 watts of RMS power. This means less output than something from their JVM line but still plenty for use on-stage or in the studio.

The versatility of the MG30GFX-U makes it great for students. It’s one of the few gig-worthy amps you’ll find with a headphone out for silent practice. It also includes a suite of on-board digital effects, giving you the freedom to experiment with your sound without spending hundreds on effects pedals. The relative simplicity of the amp’s design makes it easier to use, too, especially for younger players.

Blackstar Amplification has a similar history to Marshall, despite the thirty-year gap in their founding. The musicians who started Blackstar were looking for more innovative amps and effects than they could find on the market at the time, eventually deciding to start their own company to fill this niche.

Since the founders worked at Marshall prior to starting their own company, their approach to sound is quite similar. Blackstar offers more solid state amplifiers than Marshall, which does tend to put them at (generally) a lower price point. Blackstar amps also have a more modern sound and edge out Marshall when it comes to heavy gain and distortion. This makes them a popular choice for players in harder genres, like metal and punk. 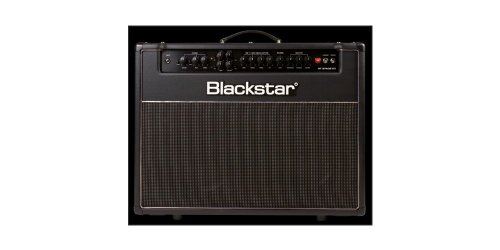 Similar to Marshall, all-tube amps make up the high end of Blackstar’s catalog. One of their best, in our opinion, is the 60-watt 2X12” HT Stage 60, a fully-functioned performance amp on par with models from established giants of the industry like Marshall. With three independent channels and six distinct modes, as well as the standard tone-shaping controls, it’s one of the most versatile amps out there, as well.

One of our favorite things about the HT Stage 60 (see full specs) is how easy it is to use. It comes with a footswitch you can use to control the effects loops, a very handy tool for live performances. Any guitar will sound its best played through the Blackstar HT Stage 60, and you won’t have to spend hours dialing in the settings to get there. If you want pure tube power in an affordable, durable, player-friendly package, this is the amp for you. 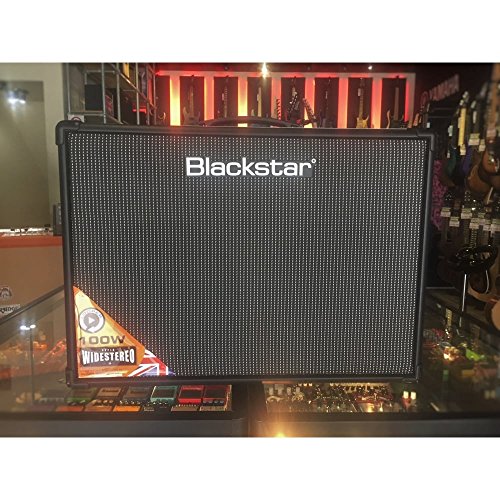 The IDCore100 from Blackstar is an intuitive, powerful 100-watt amp with all the features a gigging guitarist needs. With two 10” speakers, it can put out a good amount of sound, plenty for all but the biggest venues and loudest ensembles. If you want great sound on a budget, this Blackstar amp is a fantastic way to go.

Many guitarists have a mindset of tube amp or bust. If you’re in this camp, the Blackstar IDCore100 is clearly not the amp for you. Having said that, solid state amps like this one have a lot of advantages. it’s significantly cheaper than a tube amp of similar size and power. It also comes with a wider array of on-board effects, including a looper, as well as six distinct voicings and a USB option for easy recording. This makes the Blackstar IDCore100 a fantastic choice for gigging musicians of all experience levels, taking you from studio to stage with ease.

Blackstar vs Marshall Amps: So Which Brand’s Better?

Both Blackstar and Marshall have a lot to offer modern guitarists. If you’re looking for the best-sounding tube amp—whatever the cost—you’ll probably end up buying a Marshall, especially if you’re looking for a classic rock tone. Blackstar, on the other hand, gives you a better value. If you want something that sounds like a Marshall but can’t afford one, you want a Blackstar amp.

The truth is, both these companies make fantastic guitar equipment that will serve you well in the long-term. Hopefully this side-by-side helped shed a bit more light on the difference between these two guitar amplification giants! Good luck!