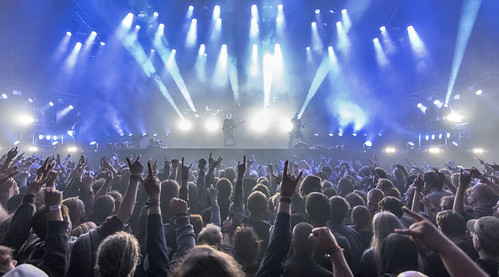 Photo by Al Case / CC BY

is often regarded as one of the “easier” sub-genres in the heavier world of music. It’s not as shreddy as thrash and power metal. It’s supposedly not as technical as progressive metal, and it’s not as complex and convoluted as death metal.

However, many who approach black metal with this mindset find that it’s actually pretty difficult for newcomers, especially when it comes to the ultra-fast picking, surprising key changes, and odd time signatures (and placements thereof).

Today, we’ll talk about some of the iconic easy black metal songs you may want to get started with. So without any further ado, let’s begin:

The Freezing Moon is arguably the most famous and popular black metal song of early 90s. As a band, Mayhem took the world by storm, and the veil of mystery that surrounded the band only helped their songs reach a much wider audience.

Freezing Moon’s simplicity lies in the fact that the main theme dominates more than half of it. A good portion of the song is occupied by the legendary intro, after which the song picks up with a rapid-tempo verse. Although the second part of Freezing Moon is fast, the guitar work is straightforward and repetitive, so most beginners would be able to tackle it in weeks.

Although solos are not a hallmark of the black metal genre, Freezing Moon features one towards the third quarter of the song. Although the high notes may be difficult to reach on certain guitars, the mid-tempo and the length of the solo make it fairly easy to play.

Tyrants come from the Sons of Northern Darkness, which is a record Immortal released in 2002 via Nuclear Blast. Just like with Freezing Moon, the main verse repeats itself throughout the song multiple times, and learning it will help guitarists tackle nearly half of the song.

The clean bridge announces the coming of a faster, melodic part. Although the drumming and guitar work are in sixteens, the notes are held in place, making the only “obstacle” the rapid picking technique. After the drums settle down, the verse comes back again, leading into the slow-paced refrain.

Tyrants is the schoolbook example of an easy song written, recorded, and performed right. Its hooks are phenomenal, and the classic sound of Immortal makes the plain notes and drums sonically grand. There are no solos in Tyrant, and aside from a handful of bridges, this 6-minute song is essentially several verses on repeat.

3. Mgla – Exercises in Futility I

The first “movement” of Exercises in Futility opens up the record and is arguably the most atmospheric and melodic piece on the album. In terms of song structure, riffs, and techniques, Exercises in Futility I is a very simple, straightforward song. It opens up with a majestic intro, follows along with a verse, returns to the intro riff fashioned into another verse, and shuffles this pattern until the end.

Playing it note for note does not imply that it will sound the same, though. The way Mikolay attacks the guitar is unique; he recorded all guitars on the album. This means that guitarists who want to learn how to play this song won’t need to hunt for multiple guitar voices.

Exercises in Futility embodies the saying “beauty in simplicity,” as Mgla crafted a masterpiece of several fairly similar ingredients.

The Polish trio known as Behemoth has been labelled both “extreme metal” and “blackened death metal,” although the core of their music lies in true black metal. From Nergal’s lyrics and world view, to remarkable orchestrations of dozens of albums, Behemoth is among the most intense, prolific black metal groups of all time.

Bartzabel is a track off Behemoth’s 2018 release called I Loved You at Your Darkest, and it’s characterized by haunting melodies, slow-paced drums, and fairly simplistic guitars.

Both verses and choruses repeat throughout the song multiple times, and both are technique-wise simple and straightforward. There is a solo towards the end of the song that is the only “complex” part of the song, although even beginners could learn it in a few weeks’ time.

As a band that has released both melodic and brutal black metal albums, as well as a group that has collaborated with full-fledged orchestras, Satyricon’s career is prolific and follows a different trajectory to most black metal bands.

On Fuel for Hatred, Satyricon wears its rock and roll influences on its sleeve, although the band’s innate love for raw black metal comes through smoothly. It’s a track that guitarists can rock out to with a relaxed picking hand, mainly due to the simple verse that occupies the majority of the song.

Darkthrone’s Transilvanian Hunger is one of the easiest black metal songs when it comes to guitar. The main riff repeats numerous times throughout the song, and the bridges were designed to offer brief moments of respite for the picking hand.

Transilvanian Hunger is moderately paced in terms of tempo, and the lack of complex bridges or intermissions make it an easy learn to even the most immediate beginner guitar players.

The only problem players may have with this song is the “raw” studio recording of the song. Learning it by ear may prove to be a bit of a challenge, although the simplicity of the riffs usually leads players to “guess” what the next note probably is.

Taken off the Carpathian Wolves record, the Barbarism Returns is a raw black metal masterpiece. It features a handful of relatively similar riffs, no vocals to deconcentrate the player learning it, and a straightforward song structure.

Just like with Darkthrone (and all raw black metal tunes), the production of Barbarism Returns is very specific, so it may take some time to figure out the chord changes. The main verse opens, leads, and closes the song, so learning its fundamental elements should be a breeze.