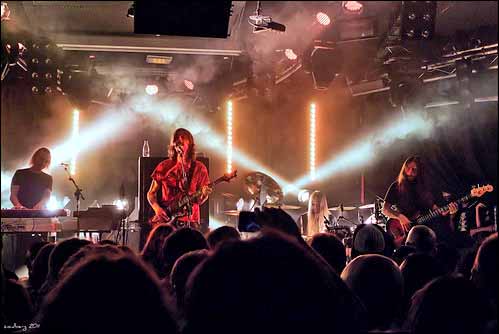 Photo by dr_zoidberg / CC BY

certainly are easy Opeth songs that beginner players might attempt to tackle on, deciding on which ones you want to try might prove to be a rather difficult decision to make. Depending on what album we are talking about, playing Opeth might mean you’re going to play some death metal, blues, jazz, folk, or progressive rock. Few bands cover as much musical ground as Opeth does so we could easily say that Opeth has something for any discerning music fan.

Formed in 1989 in Sweden, this natural force of musical ingenuity and creativity has managed to captivate the attention of listeners around the world for more than 30 years now.

While trying to play Opeth songs on the first day you pick up the guitar might not prove to be a very fruitful endeavor unless you’ve some sort of a musical wunderkind, Opeth definitely sounds far more technically demanding than it actually is. This is in part due to the often mixture of genres, sometimes complex arrangement of songs, and uncommon scales that they often use.

However, with a bit of learning, practice, and a good choice of songs you want to learn, learning Opeth songs becomes a much less daunting task than what you might expect. With that in mind, let us take a look at some easy Opeth songs you could try to play.

While it’s certainly not the song that marked the 2001 progressive masterpiece album “Blackwater Park,” Harvest is most surely one of the easiest songs by Opeth you could play. With three distinct parts, Harvest has a relatively easy arrangement compared to most of Opeth’s songs, even though it’s 6 minutes long.

The song practically relies on one strumming pattern that is not too hard to master. So be sure to get it down under your fingers before you proceed to the chord changes. The chords Opeth use are almost never basic major or minor chords and often use some open strings and odd notes such as 4ths, 7ths, etc. Harvest is again one of the easier songs when it comes to chords Opeth uses but probably will require a little practice before you can play them perfectly.

If you’re a beginner guitarist, you’re probably going to think that there is no way you can play this the first time you hear it, but stay with me for a moment. Coming from what is considered to be one of the heaviest albums the band released: “Deliverance,” Wreath features everything that makes early Opeth Opeth. Insane drumming, melodic soloing, and crazy fast riffage that is guaranteed to take your skills to the next level.

Your best course of action here would be to practice the song at a slower tempo at first. Once you feel confident enough you can start speeding up, and you’ll get to the original speed in no time. While not a great choice for the first time you pick up the guitar, if you’ve played a few scales, riffs, and licks before, you could probably tackle this song.

3. To Bid You Farewell

Standing at almost 11 minutes long, To Bid You Farewell, might look intimidating at first, but it’s actually a relatively easy song to learn. Most players get scared off by the dual guitars, as they can sound rather complex, but taken apart they are rather easy to play. The first part of the song showcases Opeth’s classical influences and is a great way to build up your alternate picking or fingerpicking skills.

Moving on you might hear some of those odd diminished chords Opeth chords, that again might sound difficult because they are not often used by popular rock or metal bands, but are actually easy to play. There is a good deal of wah and reverb guitar at work here too so you shouldn’t have too much trouble getting this part down.

Towards the end comes the reward in the form of a powerful and melodic heavy metal part of the song featuring riffs in thirds that are also easy to nail down. So try to divide the songs into different segments, and play them apart slowly before you put everything together at full speed.

Opeth - To Bid You Farewell (Guitar Cover with Play Along Tabs)

Though most of the tracks coming from the famous 2003 album “Damnation” might sound easy to play, some of them can actually be rather tricky to nail down because of the complex rhythmic patterns featured on virtually every instrument. Ending Credits, however, is definitely not one of them.

One of the least complex songs when it comes to arrangement, Ending Credits is almost 4 minutes long and features lots of simple strumming, some interesting chords, and an easy-going solo in E minor scale with some modulation into the pentatonic scale.

The best advice for this one is to refresh your E minor scale before starting and go through the chords of E minor while you’re at it, this will make playing the actual song a whole lot easier.

While most players won’t try to deal with any Opeth songs until they feel they are at an intermediate level with their playing, practicing Opeth songs is great to actually get to that intermediate level. While not the easiest band you could try to cover, Opeth certainly is one of the most rewarding bands.

Learning these four songs is not only fun, but it will also enrich your musical vocabulary, open you up to a whole new world of musical ideas and allow you to attempt even harder songs once you get these down.

With that being said, it is worth noting that there are other easy Opeth songs you could try to tackle on, but these four represent different styles that Opeth incorporates in their playing and are a great starting point for any beginner. So pick up that guitar and get to practice!