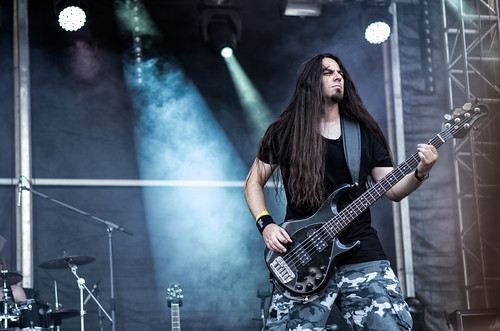 Photo by Abrisad / CC BY

one of the most versatile music genres, rocking countless sub-categories melded with other music styles, as well as sporting dozens of unique directions on its own. Most newcomers tend to stick with one genre, but it would be a shame to forfeit the opportunity to discover this beautiful, vast world in all its splendor.

Today we’ll talk about a few good metal songs you may want to consider learning, which are tunes that you probably heard about, but for whatever reason never gave a listen. Without any further ado, let’s dive in:

Novembers Doom is a band that creates a permeating gloomy atmosphere, characterized with ultra-heavy guitar riffs and the hellish bellows of Paul Kuhr that are beautifully contrasted by his majestic clean voice, which is both gorgeous and ominous at the same time.

Zephyr is one of their heavier tracks with infinite replay value. It’s riddled with a myriad of nuances and details that you’ll be thrilled to discover every time you listen to it again. However, it has quite a few parts and numerous fills, so you may need to sit around with it for a while before you learn how to play it in one sitting.

Australia is a home of hundreds of world-class acts, such as AC/DC, The Saints, Nick Cave & The Bad Seeds, The Vines, and a few rare gems such as Ne Obliviscaris.

This band has left many professional musicians speechless with their unique blend of harsh and clean vocals, intricate bass lines, rapid drum figures, odd time signatures, and pretty much everything you’d see in jazz, only much faster and more brutal.

Intra Venus showcases the band’s ability to cohesively pull off some of the most delicate and complex riffs, back-and-forth singing styles, and all of this without giving too much limelight to individual instruments. Despite the fact that this is by no means an easy song, its complexity rewards those who manage to come close to covering it.

The behemoth from Greece called Septic Flesh is an orchestral black metal troupe of some of the most talented musicians the world has seen. This band garnered such a level of popularity that they’re touring with actual orchestra groups more and more frequently.

Faust is one of their earlier songs from their staple album Sumerian Demons, and it’s a sinister, heavy track that screams with hate, violence, and power, all the while hinting at Goethe’s classic play under the same name.

The guitar and bass licks in this song are relatively straightforward, and the drum figures aren’t exceptionally complex, so don’t give up if you feel discouraged by Faust’s rapid tempo.

4. Vehemence – By Your Bedside

Vehemence is a death metal group from the United States, and classifying them into one of metal sub-genres is almost impossible. They’re heavier than heavy metal, faster than speed metal, louder than death, and more reviled than black metal.

That being said, they’re surprisingly melodic, and what makes them unique is the fact that they seamlessly integrate odd time signatures, dozens of parts that seldom repeat into a structure that holds perfectly still in spite of all the chaos surrounding it.

By Your Bedside is a song that has elements of nearly all heavier metal styles, although it’s dominantly technical death metal at its core. In comparison to some of the tunes in Vehemence’s catalog, this track is actually pretty simple and straightforward.

Vehemence - By Your Bedside (guitar playthrough)

5. Warbringer- Woe to the Vanquished

This up-and-coming thrash metal band from the United States of America wears their melodic and prog influences on their sleeve while staying true to what the essence of thrash is and is supposed to be.

Woe to the Vanquished has elements of black and power metal, but John’s exquisite vocals give the finishing and defining touch to what is a remarkably energetic song.

It’s exceptionally melodic for a thrash song, and it even has elements of technical death metal, especially during the parts where bass licks are more prominent.

Despite the fact that it’s several times easier to play and cover than some of the tracks on our list, Woe to the Vanquished is a world-class tune that can easily go toe to toe with some of the biggest classics in this metal style.

Woe to the Vanquished

6. Fleshgod Apocalypse – Thru Our Scars

Fleshgod Apocalypse took classical music, fed it with pure hate, undulating energy, and a ton of steroids before enriching it with some of the most beautiful death metal licks and growls today’s scene has ever seen or heard.

Thru Our Scars is a song where you’ll be able to hear otherworldly drums, guitars, bass, and growls, but it’s also one of the songs that is educational in terms of shredding, ripping, and surprisingly enough, guitar harmonies.

While most drummers would feel dissuaded to even try covering the first minute of Thru Our Scars, this tune is most certainly ‘playable’.

It’s as beautiful as it is slamming heavy, it’s as strong as it is dark and sinister, but more importantly, it’s a remarkably orchestrated tune that is actually among the first songs that this band ever released (on the Mafia EP).

The Black Dahlia crew stands for everything that metal should represent. Their riffs are both unique and massive, their lyrics are beyond mind-boggling, but what makes their fans so rabid is the energy that they put into their music, both live and on records.

It’s not the easiest song in their catalog, but learning it will enrich your trick bag substantially. The licks are unequivocally Dahlia’s, but getting acquainted with their style will open dozens of new doors for your playing style.

Everything Went Black is a perfect gateway for learning how to shred, scream, blast, growl, and knock the roof of any venue with sheer, vehement sonic force.