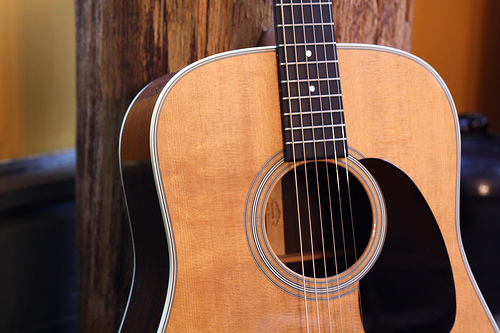 Martin has long been synonymous with high-quality acoustic guitars. Founded in 1833, they’re one of the longest-running instrument manufacturers in the United States, and are best-known for their steel-string and flat-top guitars.

Martin was also the company that pioneered the dreadnought guitar shape, which was a larger-bodied instrument capable of producing a louder, bolder tone than any other guitars in existence up to that point. Though the body shape was first developed in 1916, the first production models weren’t released until 1931, when the D-1 and D-2 were released onto the market. It was with these early models that Martin started the tradition of using either mahogany or rosewood for the construction of the body, a tradition that continues to this day.

While other companies have since made their own versions of the dreadnought shape, Martin’s models remain the industry standard. Their dreadnoughts can be identified by the letter “D” in front of the model number, with their most popular models being the D-18, D-28, D-35, and D-45. For the modern player hoping to capture that iconic Martin sound, the D-28 and D-35 are both excellent choices. To figure out which one specifically is right for you—i.e., which one would win in the Battle of Martin D28 vs D35—check out the details of each guitar below. 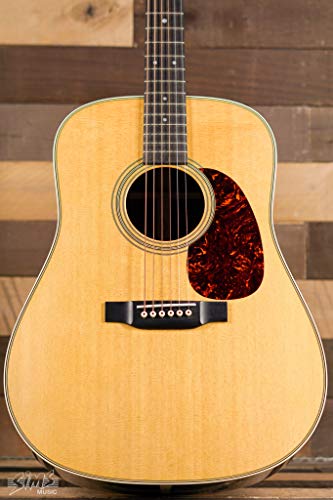 The D-28 has been an icon in the American guitar world since the 1970s, when they were played by the likes of Bob Dylan and other superstars of the era. In the decades since the model was initially released, it has been a consistent top choice for folk and rock musicians.

The added girth of the square-shouldered Martin Dreadnought design is still what draws so many people to the instrument. The D-28 especially has a deeper sound that can produce more volume and project more clearly than even other models of dreadnought-style instruments, making it especially popular with bluegrass and string band players.

In terms of materials, the D-28 uses a spruce top with rosewood for the back and sides. As the word “natural” in the guitar’s name would suggest, it’s a relatively plain and straightforward design. There are some subtle herringbone accents on the guitar’s neck, but it is otherwise relatively unadorned, keeping the focus on the sound rather than the look. The combination of spruce and rosewood gives it a warm and resonant tone that works perfectly as an accompaniment to vocalists. 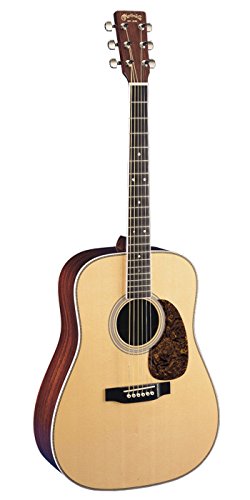 The D-35 dreadnought is similar to the D-28 in a lot of different ways. Like the D-28, it uses a dreadnought body shape for maximum depth and breadth of tone. It also uses a similar combination of tonewoods, with spruce for the top and East Indian rosewood for the back and sides, though the D-35 has a slight variation in that it uses a bound ebony fretboard with mahogany for the neck.

The construction on the D-35 is one thing that really makes it stand out. It uses a ¼” bracing on the top of the guitar, lighter than most companies use, allowing the wood of the top to resonate more freely and sharpening the articulation. It also uses a 3-piece back instead of the 1-piece back used on the D-28. This means there’s more bracing on the back (two center strips instead of one). All of these construction differences taken together give the D-35 a richer tone, darker overall and heavier in the low end, with a sharp articulation from the lighter bracing and the spruce top.

I’m going to start off by saying you really can’t go wrong with either of these Martin models. There’s a reason Martin is the de facto brand recommended to bluegrass and folk players alike—and why both of these guitars have been so incredibly popular since their respective releases on to the market. The guitars sell at a similar price-point because they’re crafted with similar materials, and both are instruments that can last you for your entire musical career.

The difference between the tone of the D-28 (see full specs) and the D-35 (see full specs) are subtle but noticeable to a well-trained ear. Generally speaking the D-35 is more bass-heavy, while the tone of the D-28 is more balanced across the range. This is why the D-35 tends to be better for rhythm players who need that strong bottom end while the D-28 is a bit more versatile and most players prefer its sound for melodic lines and solos.

The feel of the two guitars is subtly different, as well. The D-35 uses a bound fingerboard. There’s also a slight difference in the neck. While both can be used for strumming, flatpicking, or even fingerpicking, in general people who like picking will prefer the feel of the D-35, while strummers will prefer the D-28. It’s also easier to bring out individual notes within a chord using the D-28, which is one of the reasons it’s generally preferred by folk guitarists.

Another thing to consider when you’re making your decision is what context you typically play in. The brighter sound of a D-28 (read users’ reviews) tends to cut better through an ensemble, which makes it great if you’re in a bluegrass band, where the deeper sound of the D-35 (read users’ reviews) is more likely to get lost. Conversely, if you’re mostly a solo player, the tuneful quality of the D-35’s tone is an excellent complement to vocals and the fat low end gives your tone more presence, filling the stage better than a D-28.

If it were a popularity contest, the D-28 would win hands down. It’s one of the most-recommended guitars in both the bluegrass and folk genres—and with good reason. Its balanced tone makes it versatile for use in almost any context. While the D-35 is less common, especially in the bluegrass world, it certainly has its merits and is worth considering when you’re ready to purchase a new Martin dreadnought, especially if you like a darker, deeper tone. The best thing you can do is listen to both models in action, and play a few yourself if you can. Whichever way you go, you’ll get a guitar that’s a joy to play and delivers a consistent and powerful tone.