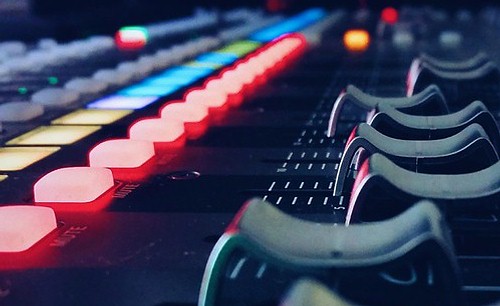 Photo by Riberto Frederico / CC BY

between the Allen & Heath QU-32 and Behringer X32 can be tricky. Professional mixers are serious pieces of equipment—with an equally serious price tag, especially as you add channels and features. This makes it especially important to do your research and find the right mixer for your needs.

As you already know, when you’re shopping for recording equipment, two names that will come up over and over are Behringer and Allen & Heath. Both companies offer a range of professional mixers aimed at an array of different users. Their two 32 -channel mixers, the QU-32 and the X32, earn consistent high marks for sound, durability, and usability. While the Allen & Heath QU32 is arguably the better mixer, the Behringer X-32 offers unmatched value and portability.

Let’s take a deeper look at both models to see where each one excels. Only then can we declare a winner in the Battle of Allen & Heath QU-32 vs Behringer X3. 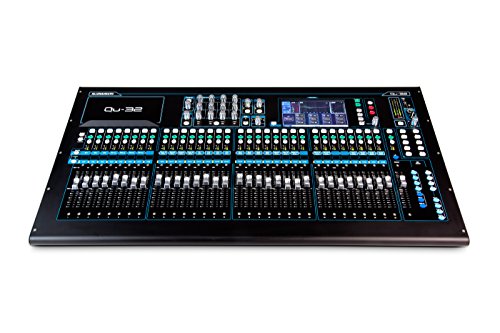 The Allen & Heath QU line of mixers and audio products is an entire sound ecosystem that can take care of all your mixing needs. The QU32 is a beast of a mixer with 32 independent channels, giving you professional-level power and performance at an excellent value.

Each channel on the Allen & Heath QU32 (see full specs) has its own dedicated preamp, digitally controlled through the AnalogiQ technology. The sound is transparent with no distortion, with low latency digital to analogue converters for the best output quality. It also comes pre-loaded with an EQ library of presets tailor-made to suit specific microphone and instrument combinations.

It can be complicated to use a mixer of this size. The Allen & Heath QU32 makes it easier with an intuitive layout and a color touchscreen. Use the rotary encoder to get quick access to all sound parameters, scenes, and set-up menus. All 33 channels have dedicated, clearly-marked controls. Overall, the learning curve is pretty low, especially for a seasoned recording tech.

You can also customize the controls of the Allen & Heath QU32. It lets you store up to 100 scenes and recall them easily. There’s also a user-defined custom layer where you can assign any combination of inputs and effects.

One thing you can always count on from Allen & Heath is a high construction quality. All the knobs and faders on the QU32 are secure and smooth-moving. You’ll get years of professional recording power when you bring the Allen & Heath QU32 into your studio.

Behringer is known for making quality sound equipment at an affordable price. The Behringer X-32 is a great example of this. It has more channels than the Allen & Heath above, but costs a bit less (generally, though price fluctuations do happen). This isn’t to say the Behringer X32 is cheap, but it is a better value per channel.

The Behringer X-32 (see full specs) is an intuitive mixer with the power to handle all your sound needs, both on the road and in the studio. It also includes nice modern touches, like remote control through an iPhone. The personalization options are helpful, as well. Like the Allen & Heath above, it has a user-definable control strip. Choose which parameters you adjust most and set your mixer up for easy in the moment adjustments—ideal for live recording and DJs.

As far as ease of use, the Behringer X-32 is quite user-friendly. The dedicated channel strip also includes a graphic user interface, making operation of this mixer quite intuitive. You’ll also love how easy it is to manage stored scenes. You can truly create some complex mixes, even if you’re not a recording tech expert.

Both of these mixers give you a wide array of inputs and a professional level of performance. From a price standpoint, the Behringer X-32 is a better value per channel. But while cost is often a factor when you’re buying new gear, it’s not the only thing you have to consider.

What are the key differences between the Behringer X-32 and the Allen & Heath QU32? Let’s break it down feature by feature so you can see which is best for each type of user.

The Behringer X-32 has a simpler interface. That can make it easier to use initially, especially for those who don’t have much experience with mixers. The tilted high-resolution color screen is backlit and easy to read, even in a dark club.

While the Behringer X-32 is simpler, most professional sound engineers will probably find the Allen & Heath QU32 easier to use. Independent faders for each channel give you more control over your mix. The assignable controls and large scene memory keep all your most-used features at your fingertips. It also has a better library of EQ pre-sets.

The Allen & Heath QU-32 is a hefty piece of equipment, weighing over 50 pounds. It’s designed to be permanently installed in a venue or recording studio, where it can serve as the centerpiece of your workstation. While the Behringer X32 isn’t exactly small, it is a bit lighter and more portable.

If you need portability, Behringer also offers you another option—the X-32 Compact: 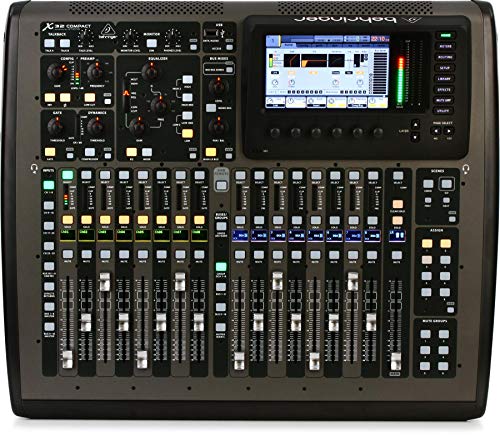 It’s about 15 pounds lighter than the Allen & Heath and has smaller dimensions, since it only has 16 faders instead of 32. As an added bonus, it costs significantly less than either the Behringer X32 or the Allen & Heath QU32. That makes it a great choice for anyone who needs affordable professional sound on the road, like DJ’s, touring bands, and traveling sound engineers.

The AnalogiQ-controlled preamps on the Allen & Heath QU32 give you a sound that’s warm and natural, with a musical, nuanced tone. It’s more transparent than the Behringer X-32, with a lower noise floor.

This isn’t to say that the sound quality of the Behringer X-32 is poor. Its MIDAS-designed preamps are worthy of professional applications, and especially excel in live recording. In a side-by-side comparison, though, the Allen & Heath QU32 has a richer, more musical sound.

As you can see, the choice really comes down to how you’ll use it. If you’re looking for the best 32-channel mixer for a recording studio, the Allen & Heath QU32 is the winner, in our opinion. Having said that, the Behringer line gives you more versatility at a great value, especially if you want a portable package in its X32 Compact version (see full specs). The good news is that, whichever way you go, you’ll get a well-made piece of equipment that will give you great sound for years. Good luck!