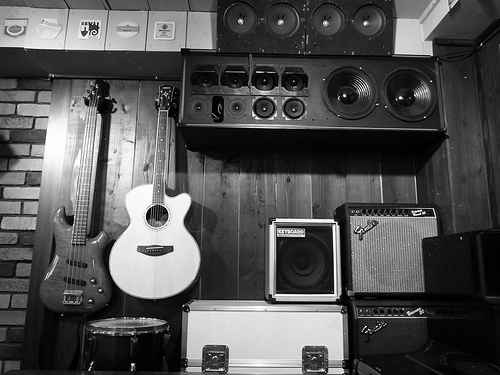 Photo by Gagagah / CC BY

guitarists have used 12” speakers in the majority of both recording and performance applications. As speaker technology has progressed, however, a wider range of high-quality speaker sizes has become available, from 2” practice speakers to 15” valve amps.

A 10” speaker can be great to have in your arsenal for when you’re playing on smaller stages, where it’ll have less boominess and distortion than a 12” speaker would. The slightly smaller driver has an overall lower output level, and while this reduces the speaker’s sensitivity it also allows for a thinner cone, resulting in more intense vibration and a sound with greater detail and complexity.

The best 10 inch guitar speakers can work well in their own cabinet or in combination with other speakers of various sizes to create a truly personalized sound. Choosing a speaker can be an intimidating venture. Aside from the amp and the guitar itself, no other part of a guitarist’s set-up will have as much impact on the overall sound. The four speakers below show a wide variety of tonal characteristics, and are all excellent places to begin your search for your new sound. 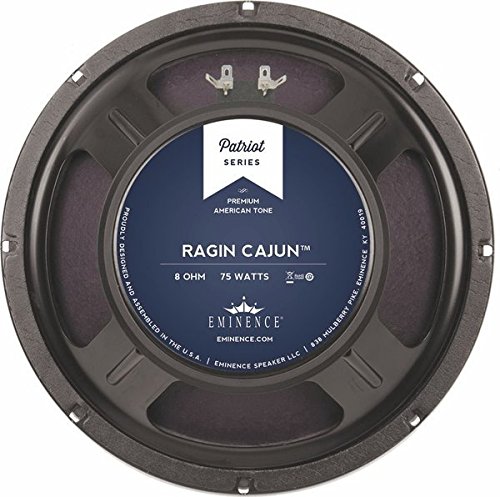 The Ragin Cajun delivers enormous sound for a 10” speaker, bringing open sound across the frequency range—even in the bottom end, which is often lacking in smaller amps. It’s got a warm but focused mid-range and the high end is crisp and aggressive. One of the best things about the Ragin Cajun is that it can sound great in any cabinet style. Whether your amp is closed- or open-backed, this speaker will give you a solid tone with just the right amount of an edge, ideal for country, blues, or rock players.  It’s without a doubt one of the best 10” speakers. 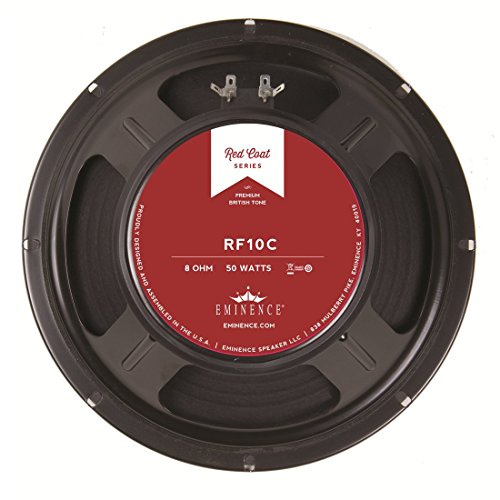 Even within the same brand you can find speakers with completely different sounds—just compare the Red Fang to the Ragin Cajun above. The Red Fang (see full specs) uses a vintage British voiced design reminiscent of old-school Vox amps and brings more grit and character to your sound than any other 10” speaker on the market. This speaker has a vibrant, chiming high end balanced out against a solid mid-range that keeps single-note solo lines from getting too bright. Like the Ragin Cajun, the Red Fang doesn’t neglect its low end, and gives a surprisingly fat, warm bass for its size. This is the one of the best 10 inch guitar speakers for Rockabilly or Surf rock, but could work for anyone who wants to add some character to their tone.
Bad Cat Mini Cat w/Eminence Red Fang, Telecaster w/Kinman Broadcasters 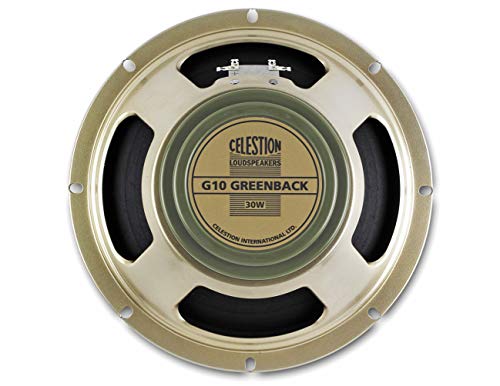 The best 10” guitar speaker on the list for jazz musicians, the warm tone of the Celestion G10 (see full specs) also makes it a popular choice among acoustic players and blues or folk guitarists. The bass is powerful without getting boomy and the heavy low end darkens the sound without losing the detail on fret work or fingerpicks. Excellent for use on its own in small stages or in other intimate settings, the G10 can also be paired nicely with a brighter speaker in a larger cabinet to lend a bluesy tone to your overall sound.
Marshall Class 5 with Greenback G10 and Wizard HQ Audio 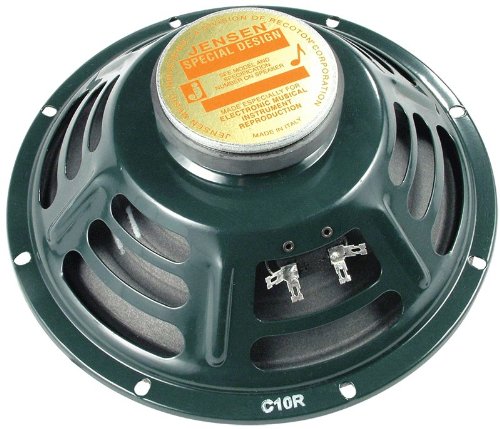 Even if you ain’t got a lot of dough, you can get great sound with a Jensen C10R. This speaker’s got a steady, balanced tone in the mid- and high-range with a clear but mellow low range. Its open tone makes it the perfect speaker for rhythm players. Players that like using overdrive and distortion effects will also appreciate the sonic characteristics of this speaker, which gives the tone a nice extra grit. The smaller magnet also reduces the weight of the speaker inside your cabinet, making your set-up easier to transport—arguably a less important consideration than the sound, but a nice added bonus.  This just might be the best 10” guitar speaker for the money.

Before you go out shopping for a new speaker, there are a few things you should think about. If you’re buying the speaker to go in an existing cabinet—either as a replacement for the one already in there or as an addition—make sure to check out the impedance and power rating. The impedance has to match completely between your amp and all speakers. This number, given in ohms, is essentially a measure of electronic resistance from the speakers. An 8 ohm impedance is the most common for 10” speakers, but some are 4 ohm or 16 ohm, so you should check for sure before making your purchase. Many speakers, like the Jensen and the Celestion listed above, have multiple models at different impedances, making them perhaps easier to fit into an existing system.

With the power rating, you have a little bit more flexibility. The power rating is a measure of how much electrical power is required to run a given device. If you’re combining speakers in the same cabinet, the overall power handling of the cabinet isn’t quite as simple as adding the speakers together. Instead, multiply the speaker with the lowest power handling by the number of total speakers. The power handling of your speakers should be between 1.5 and 2 times that of your amp (e.g. if you’ve got a 100 watt amp, the wattage of your speakers should add up to 150-200 watts).

As you’re shopping for speakers, you might see them referred to as having a British or an American sound, or sometimes “British voiced” or “American voiced.” There’s no hard and fast rules as to what makes a speaker British or American, but generally speaking American-style amps and speakers will be brighter and cleaner, with early breakup and smooth mids. The British sound tends warmer and darker with chimey higher tones and a strong midrange. Mostly the distinction has to do with where certain brands are produced: American sound is most commonly associated with Fender, while British sound is associated with Vox and Marshall.

Obviously, each individual speaker and amp is different and there are no hard and fast rules when it comes to differentiating British from American sound. If you are looking to develop a certain sound, the Eminence Red Fang is the most British-sounding speaker on the list, while the Jensen Vintage C10R is a classic American sound.  Whichever you choose, you can be confident that you’ll have your hands on one of the best 10″ guitar speakers on the market.