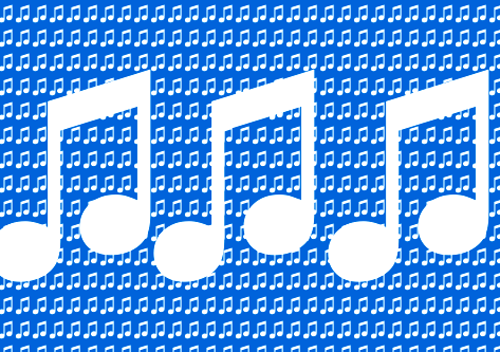 Photo by cilipmarketing / CC BY

a decent car audio system can be done in two ways. There are those who want to go the full 9 yards, with specialized amps for each section of the system, massive woofers, and similar stuff. Then there are those who just want something a bit better than the OEM stuff they already have. Most older car’s speakers are either degraded or damaged some other way, so it’s not that uncommon to see users trying to find a reliable but more or less equal replacement for these.

One of the best ways to do it is to get a set of 4x10 speakers. The elliptical design of a 4x10 transducer is more or less optimal for in-car audio. Combine that with the fact that most of these speakers come with an integrated tweeter, and in fact are full-range in nature.

We’ve selected four of the best 4x10 speakers out there today, which will get you the performance you need. We were looking for something that had enough power, great frequency range, and leaves some room for upgrades. Without further ado, let’s dig right in. 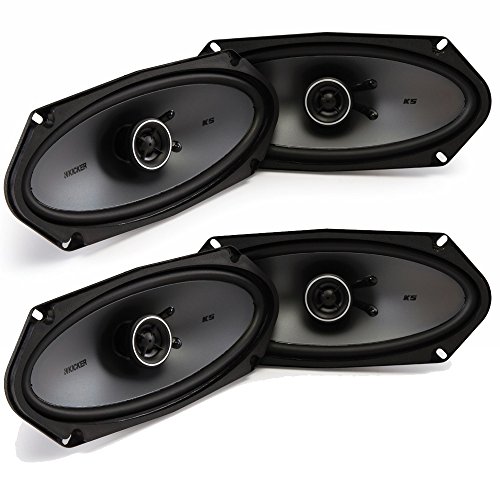 If there is one brand you can trust to deliver good performance at a reasonable price, it’s Kicker. They produce a whole line of car speakers, ranging from cutting edge sub-woofers to more basic models such as the one we are looking at today. Featuring a clean design, these speakers are capable of pushing up to 150 Watts at their peak, while the RMS rating sits comfortably at 75 Watts per speaker. This is a two-way design, with a half inch neodymium tweeter in the middle, which has a silk dome.

The woofer cone (see full specs) is made of polypropylene and is bound with a decent rubber section. In other words, this thing is built like a tank. When it comes to performance, you are looking at a very wider 45Hz-20,000Hz range which is guaranteed to deliver great details and move enough air. Compared to some other designs in its category, this Kicker pair packs a pretty good punch. Once you decide you want something more, you can hook these up to an amp and add a dedicated subwoofer to the mix. Overall, Kicker 41KSC4104 4x10″ 2-Way Coaxial Speaker is one of the best 4x10 speakers around and quite versatile to boot. 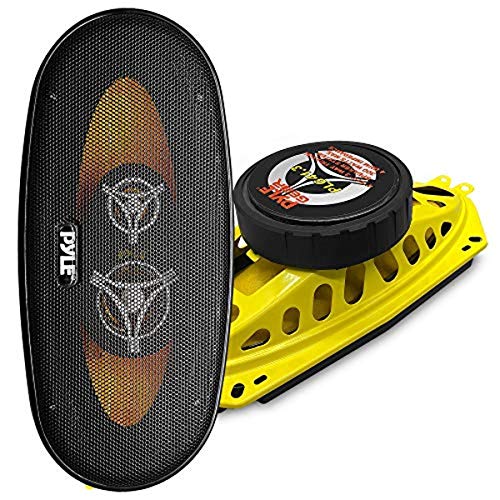 PYLE is probably not as big of a brand as Pioneer, Kicker or others; however, they are known for their awesome bang for the buck products. The PLG41.3 comes with a few surprises and a very flamboyant design. The cone of the woofer is painted bright yellow and so is the basket. The pair is capable of delivering some 150 Watts of power RMS, while the peak output is limited to 300 Watts.

One great thing about PYLE PLG41.3 is the fact that it’s a three-way system. Aside from its large woofer and 0.5-inch neodymium dome tweeter, you also get a 2-inch polymer cone mid-range speaker. With the frequency range spanning from 60 Hz to 22,000 Hz, this set doesn’t dig as low as some do, but it offers a pretty decent definition across the entire range. Overall response is pretty great for a budget set like this one, and the sound itself comes across as very organic. 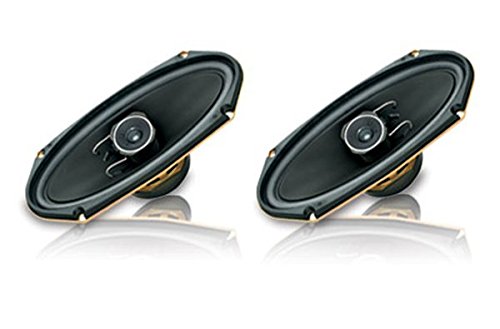 No list of car speakers would be complete without Pioneer. TS-A4103 is a very impressive model for a number of reasons. Right off the bet, this is the best bang for the buck choice out there. We are talking about a beautiful looking set of transducers that bring razor-sharp definition at an affordable price. Like the two speakers we talked about, this is a two-way setup with a woofer cone hosting a tweeter. The diameter of the tweeter found on Pioneer TS-A4103 (see full specs) is 2 and 5/8 inches, which is a decent size.

The best thing about it is the fact that it sports a paper cone. What that translates to is lighting sharp response, or in other words, supreme definition. Frequency range goes from 38Hz to 23,000Hz while the recommended power range is set at 2-35 Watts RMS. Again, a bit underpowered for our taste but the clarity and clinical precision these fellas offer makes up for it. These are strong contenders for the best 4x10 speakers. 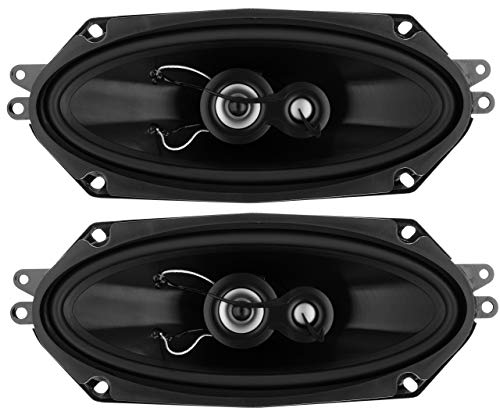 Last but not least, we have a budget-friendly set coming from Planet Audio. One glance at these bad boys reveals that PA went for ultimate performance for the money. Unlike the speakers we have previously talked about, Planet Audio TRQ413 Torque is a three-way unit. You have the standard woofer cone, but then you have two tweeters in a side-by-side configuration.

Frequency range doesn’t reach as deep as some would like, starting at 70Hz, but the upper limit sits comfortably at 20,000Hz. Power rating for the pair is 400 Watt Peak and some 200 Watts RMS. In other words, you should get up to 100 Watts RMS per speaker. With a 3 year warranty, Planet Audio TRQ413 Torque is a great buy for the money. They might not have the definition as the previous few models on our list, but these bad boys will move some serious air nonetheless.

Building a decent audio setup in your car is getting cheaper and easier by the day. These four models we have shown you today are a perfect example of this change. We wanted to find speakers that brought enough power, offered a decent quality of sound, and left enough room for upgrades. Each of the entries on our list fit that description and then some.

Which one you go for is completely up to you; however, make sure to check the specs of your deck if you don’t have a dedicated amp. With that said, power ratings on these models are pretty much within the limits of performance any OEM or aftermarket radio should deliver. Good luck!