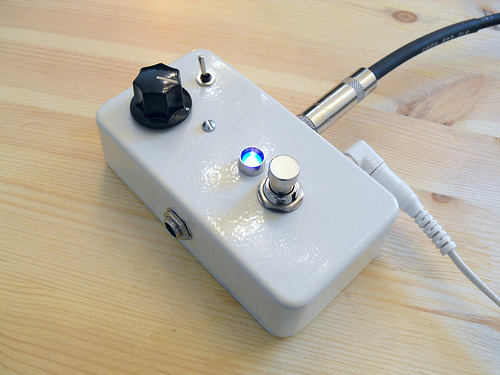 Photo by Tim Patterson / CC BY

booster pedals are one of those obscure tools that not a lot of guitarists tend to use. In order to fully take advantage of their potential, you need to know what these pedals exactly do. As their name states, treble booster pedals boost treble frequencies in varying degrees.

Our main criteria for this list was the quality of the transistor and the frequency range that was affected by each individual pedal. Without further ado, let’s dig right in. 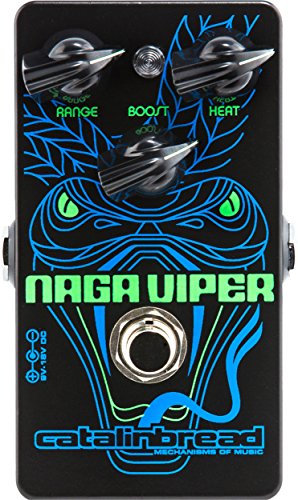 If there’s one treble boost pedal that has become the go-to choice for most guitar players, it’s the Naga Viper from Catalibread. It’s reasonably priced and sits in that sweet spot when it comes to performance to price ratio. It’s no secret that Naga Viper was modeled after the legendary Dallas Range Master – a treble booster that has been used by some of the greatest guitar players in the history of music.

When you first unpack Naga Viper (see full specs), it gives you the feeling only a boutique pedal can. The case is sturdy and rather conservative in nature. However, this is countered by a very lively design that covers the entire pedal. In terms of controls, you have three knobs and a stomp switch. Knobs control Range, Heat, and Boost. With this combination, you can adjust the gain and select which portion of the frequency range you want to boost. It might sound crude, but you can be very precise with the controls available.

What Naga Viper offers is a very stable performance which delivers quality tone many have grown to appreciate. When dialed in properly, you get a very rich gain boost in the upper range, which definitely adds width to the tone. It’s one of the few pedals that will give your signal that edge. If you have listened to Brian May’s stuff from back in the day, you know what we’re talking about. Hook this baby up to a decent tube amp and you’re ready to go. It’s, without doubt, one of the best treble booster pedals around. 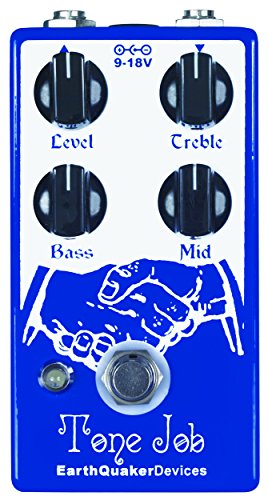 For a relatively small company, EarthQuaker has a very extensive range of effects pedals in their offer. Tone Job we are looking at today is marketed as an EQ pedal, but its capability to boost trebles is why it’s on this list. It comes at a reasonable price considering what you’re getting and is packed with some serious potential. If you’re looking for a more versatile package that offers more than just a decent treble boost, this is one of the best options on the market.

EarthQuaker Devices Tone Job comes in a robust yet simple format, just like the previous pedals on the list. One thing that we’d like to see changed are the input and output ports. Instead of being placed on the sides of the pedal, both of them are found on the back panel. This might be a nuisance if you want to hook this pedal up to a pedalboard. Controls come in form of four knobs. You have Level, Treble, Bass and Mid knobs. Each of these is capable of attenuating or boosting the signal attributed to each part of the frequency range.

If you ask the user base what’s their opinion of Tone Job as an EQ pedal, you will get mostly positive feedback. However, we are interested in its ability to give you that treble boost. Thankfully, this is something that Tone Job does very well. There is plenty of gain to work with, allowing you to increase the range of the trebles without deforming the rest of the frequency range. On top of that, you can add a few extra mids into the mix and get a well-defined tone. This should be on anyone’s list of the best treble booster pedals. 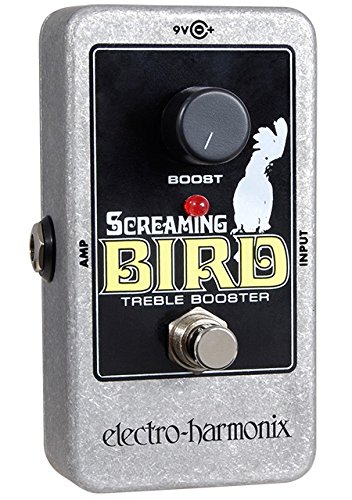 Electro-Harmonix needs no special introduction. This company has been around for a while now and their products are known as quality goods. Electro-Harmonix Screaming Bird Nano is their take on an affordable treble boost pedal that delivers the core experience.

The design of this pedal falls in line with Electro-Harmonix usual aesthetics. It’s a very simple pedal that comes with one knob and a foot switch. What that tells us is that it impacts a determined frequency range, and delivers a high gain boost to that part exclusively. If you need a simple booster pedal, this is what you’re looking for.

Even though it’s fairly limited compared to other pedals on our list, Electro-Harmonix Screaming Bird Nano offers a great performance at a price that is often much cheaper than anything we’ve mentioned so far (check the current prices, though). This little pedal is capable of pushing out 20 dB of additional gain, which is more than enough headroom to play with. 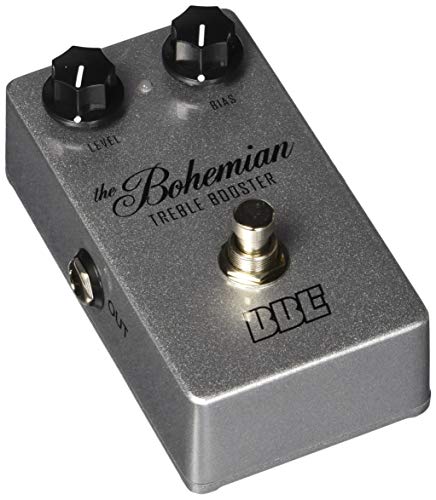 The Dallas Rangemaster is one of those iconic pedals that helped to shape the sound of an era, and maybe the most popular treble boost pedal in guitar history—and as a result, vintage Rangemasters cost more than most guitars. The good news is, pedals like the BBE Bohemian can give you a faithful reproduction of that classic sound at a much more affordable price.

The Bohemian is genius in its simplicity. It has a rugged metal housing and a clean straightforward interface, with two adjustment knobs (level and bias). This is a pedal designed for use by gigging musicians and it has all the convenience and features you’d expect as a professional. The non-slip base keeps your pedal in place no matter how hard you stomp it and there’s a true bypass for your signal so your tone will only be altered when and how you want it to be. Adding to the convenience, it runs on a 9-volt battery, so you can use it anywhere without worrying about outlet availability.

The BBE Bohemian uses vintage circuitry to give you the truest possible recreation of that Rangemaster sound. One thing that we noticed is that this is a very versatile pedal, despite the simplicity of the controls. It’s obviously a great way to brighten up the sound of a warm tube amp, but that’s not the only bag in its trick. You can use it to give your tone more sustain, or to add depth to a thin tone. It works beautifully with both clean tones and overdrive, too, and can be paired with pretty much any amp. For a vintage treble boost sound with all the modern convenience, the BBE Bohemian is an excellent option.

When we created this list, we wanted to find the most versatile treble booster pedals that offered enough gain boost in a balanced manner. The main goal and criteria of this item are simple – to give your sonic attack a boost the treble department that sounds natural and truly makes the sound clearer and brighter.

The ones we showed you here definitely fit that bill. As you can see from this list, even the best treble booster pedals come in various formats and price ranges so you definitely don’t need to spend a lot of money to get a great tone.