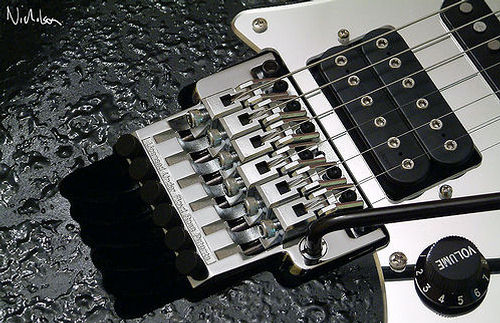 Photo by Gray / CC BY

call it the “Whammy Bar,” others call it “Tremolo,” and some even call it (wrongly) “Floyd Rose.” We’re actually talking about the “Vibrato” handle bar system – a neat little guitar accessory used to shift the action back and worth. (Note – don’t confuse tremolo bars with tremolo systems. The former is just a part of the latter.)

There are guitarists who claim that these “tremolo” bars are a hindrance to their style, and that’s only partially true. Namely, the tremolo bar can get in your way if you’re not accustomed to its position, but it can only help you achieve sounds and effects that are otherwise impossible to play. We’ll show you some cool tremolo systems then, after our recommendations, we’ll go into more details. So . . .

Here are our reviews of the 4 best tremolo systems on the market: 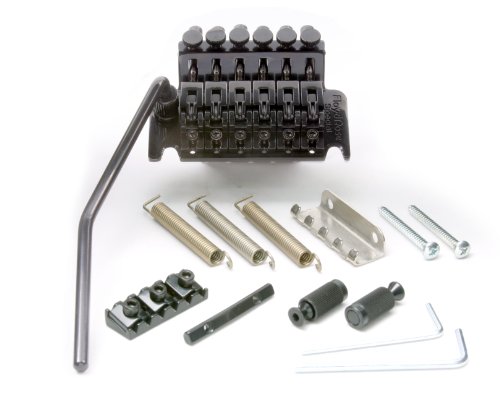 Floyd Rose is the “alpha and omega” of tremolo systems, and it’s not surprising that most people begin with one of its variants. This particular model comes from the “special series”, boasting a substantial boost to its (already great) versatility and reliability.

This double-lock tremolo system features a highly durable steel plate, zinc saddles, and the knife-edge design which minimizes the string tension when used. Another great thing about this tremolo system is that it doesn’t cost much at all.

In essence, a cheap high-quality system such as Floyd Rose Special is one of the best tremolo systems you could find for the money. It’s durable, versatile, and it offers a high range without hindering the tuning stability. It holds a massive value for the money and you should definitely consider it if you’re low on cash. 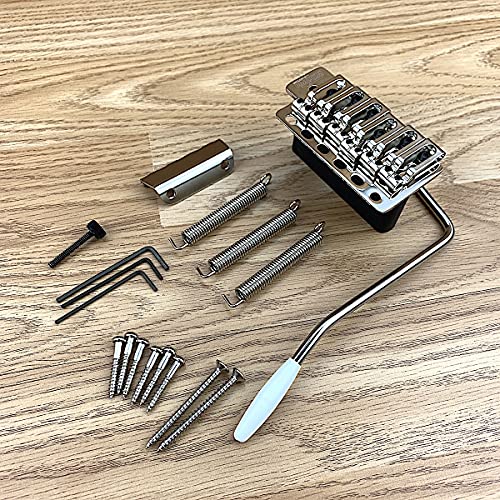 Gotoh’s Wilkinson VSVG is one of the simplest tremolo systems out there, as well as the most-balanced model within the price range. Further on that note, it doesn’t cost much at all, as it belongs to the “medium” price point category.

This tremolo system features baseplate holes which won’t leave any scratch marks once you decide to take it off (replacement, upgrade, maintenance). The aforementioned holes work like a charm when it comes to tuning stability, as they lock the strings in place with ease.

Professional musicians recommend the VSVG for several reasons – it brings a plethora of benefits on the table without costing a fortune, and the least you should expect is a combination of impeccable tuning stability and easy-to-use setup.

Bigsby’s B7 is an aluminium tremolo system that boasts a high level of durability. On top of that, it’s very easy to use it, much easier to install it, but note that it can only be used with archtop guitars.

This tremolo system is practically ideal for beginner guitarists, as it offers a fair balance between durability and range without costing a fortune in turn.

Even though only a specific type of guitars can accommodate this marvellous tremolo system, its straightforward design does not hinder your bridge and puts but a fraction of stress on the strings when compared to similar models. In general, it’s among the most valuable tremolo systems within the price range. 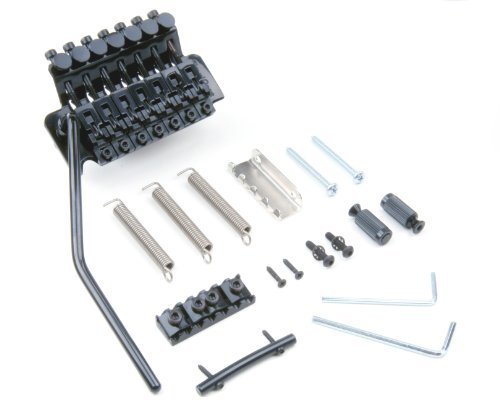 Since Floyd Rose is among the best locking tremolo system models, we’ve decided to review the 7-string variation. The brand thought about the aesthetics as well, offering you the chance to pick between black, chrome, and gold colors so that this tremolo system can complement the color of your guitar.

By definition, this Floyd Rose is a double-locking tremolo, which makes it the best floating tremolo system for the buck—or at least the most reliable and durable one. It features hardened-steel (Rockwell) materials which can easily withstand some serious abuse.

The best part about this Floyd Rose tremolo system is that it won’t fail you, no matter how much and in which way you use it. The worst part, however, is that it costs top dollar. Nevertheless, it boasts quite a value for the buck.

What Makes the Best Tremolo System?

The design of the tremolo system can have quite an impact on how it’s supposed to be used. For instance, Bigsby (see full specs) is among the most straightforward whammy bars out there – it’s easy to use and install it, but it’s not compatible with certain guitar types (limited to archtop guitars). That, however, has little to do with its title of one of the best locking tremolo system models ever made.

On the other hand, a plain Floyd Rose system (see full specs) is comprised of numerous parts and even though it’s one of the most popular tremolo systems, it can be characterized as complex.

Shifting the action on your guitar means that your strings will be pulled from their regular positions. That necessarily leads to tuning shifts, but most of the time they’ll just go back to where they were. Now, most of the time won’t cut it, so it’s only smart to consider a tremolo system which won’t be so aggressive on your strings.

People consider “Floyd Rose” to be among the most stable tremolo systems, and for a good reason too. Namely, this system completely overrides the machine heads (tuning gears) on your guitar by locking your strings in a fixed position.

There are six screws which won’t permit you to leave your tuning (unless unscrewed), even if you wanted to. The best floating tremolo system will never impede upon your guitar’s intonation.

Hipshot, on the other hand doesn’t help with this issue, but it’s quite easy to install and features a “long range” of bending. If you want a balance between tuning stability and other factors, your best bet is Wilkinson VSVG – it’s a decently versatile tremolo system which doesn’t particularly excel in any field of performance, but makes up for it with exquisite all-around design.

The “range” of your tremolo system indicates the lowest and highest points of pitch you could achieve when using it. Basically, the tightness of the springs and the general layout of the handle are the two main factors which determine the range.

Some tremolo systems allow you to significantly shift the pitch, resulting in the so-called “divebombs.” You can’t perform this technique which just any tremolo without risking to snap a string (or two), which is why you should search for a stable tremolo system – the range should be subsidiary here.

Each tremolo system is comprised of a plethora of smaller parts. It’s safe to assume that each one is as important as the next, which leads us to the conclusion that a broken part hinders the entire system. You can’t put a label of the “best locking tremolo system” next to a whammy bar if it breaks down as you play.

It’s up to you to determine which tremolo system is durable enough for you. People who use the whammy bar a lot, just like those musicians who tend to abuse the “divebomb” technique need a sturdy, rugged tremolo system. Another option is going with a simple system, such as Bigsby B7.

Most modern locking tremolo bars and systems are actually “floating bridges.” They were made popular by one of the greatest guitarists of all time – the almighty Steve Vai, and it’s of no coincidence that more and more people come to embrace this useful guitar accessory. If you’re looking for the best floating tremolo system, feel free to browse through our top picks in the sections above.

Tremolo systems are quite easy to understand – using them, however, is a completely different story. You should always pick your tremolo system in accordance to your skill level, budget, and playing style – the “things which make the best tremolo system” section should be considered as a guideline, not a set of rules. Only you know what’s best for you, so we wish you all the luck in finding the best model. Good luck!