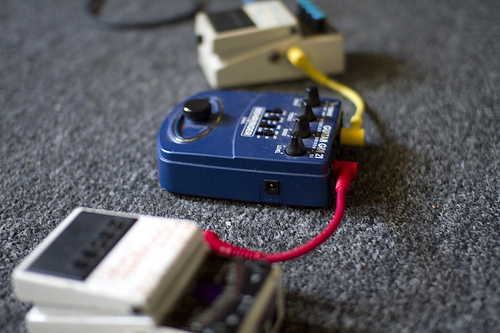 Photo by Incase / CC BY

that you can get for your guitar are obvious in both their sound and purpose; a distortion or a fuzz pedal, for example, gives you a pretty clear picture of the effect right in the name. With more subtle effects, however, the line between them can be less clear. This is especially true when you’re talking about the difference between a tremolo pedal and a vibrato pedal.

Both of these effects give you a periodic tone-altering effect. The difference is that tremolo pedals use a cyclical change in volume to achieve the effect, while vibrato instead changes the pitch—usually just taking it down from the starting note and back, but sometimes veering both sharp and flat around the pitch center. Further complicating matters is the fact that many vibrato pedals use a bit of tremolo effect, as well, and many pedals have settings that allow them to do both.

If you’re still not sure whether a vibrato effect is what you’re going for, listen to the pedals on the list below, which represent 4 of the best vibrato pedals on the market.

The handcrafting, small-batch tradition in guitar pedals is still going strong, and Diamond proves it. This small, family-owned company that operates out of Bend, Oregon is in the business of creating unique and innovative ways to process your guitar signal—not simply to replicate the popular effects already on the market.

Their Vibrato pedal (see full specs) uses bucket brigade analog delay technology that gives you a true pitch-modulating vibrato, with control knobs along the top that let you control both the depth and the speed of the variation. There are also two toggle switches, one labeled “jazz” that gives you a darker, vintage-styled tone, the other “high” to give you more extreme pitch changes.

It’s not only a vibrato pedal, either; it also gives you a chorus control that blends some of your dry signal back into the effect, giving your overall tone more depth and complexity. Want a great chorus vibrato pedal? This is it. 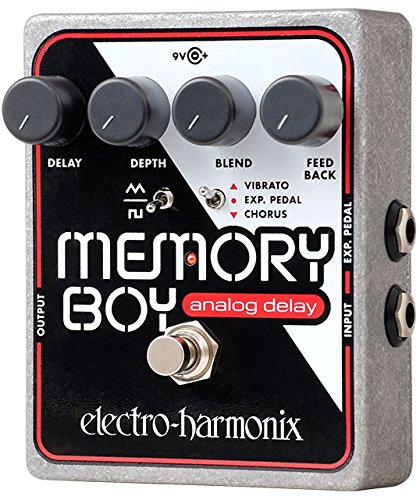 One of the most confusing things about shopping for effects pedals is the fact that many of them can go by a variety of names depending on who manufactures it. The Memory Boy from Electro-Harmonix is marketed as a delay effect pedal, and while it does that very well, its vibrato effect is equally impressive.

The Memory Boy is an update of an older pedal, the Memory Man, to give players more modulation options and an expression pedal input that lets you manually control the rate of modulation. Access the vibrato through the three-way toggle system, which also gives you a chorus option, essentially making the Memory Boy three great pedals in one. 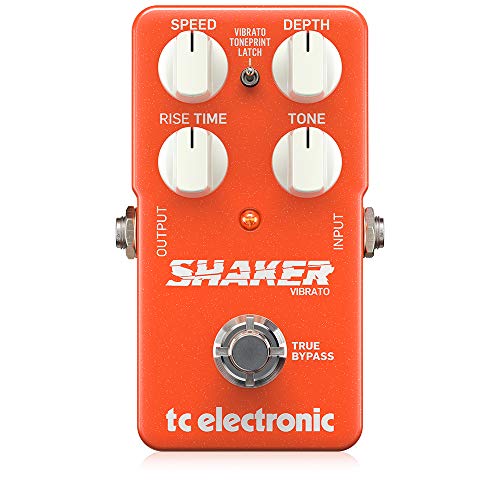 The Danish company TC Electronics has gained international acclaim for its wide array of effects options. Their pedals are intuitive, compact, and consistent. With the Shaker, you get four control knobs: the standard speed, depth, and tone controls, as well as one for rise time, which changes how long the vibrato takes to reach its specified depth, letting you alter the shape of the vibrato.

The vibrato toneprint latch toggle is another helpful feature (see full specs), letting you add vibrato exactly where you want, and can be especially effective when used for holding notes and chords. The pitch modulation is smooth and musical, and the host of ways you can customize your tone make this a versatile pedal for players of all genres and styles. Needless to say, it’s one of the best vibrato pedals around. 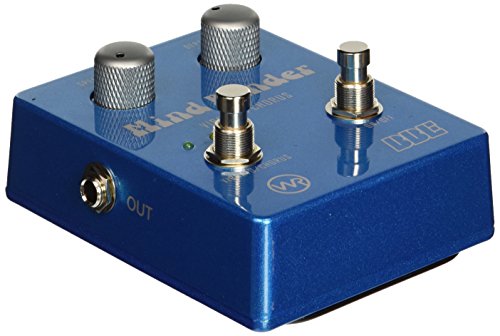 BBE pedals are best known for their durability and consistency. With the Mind Bender, they add value to that list of virtues, offering a pedal that can give you analog vibrato and chorusing effects for a song.

It uses an authentic Bucket Brigade circuit to achieve this classic vibrato effect—and the interior hardware isn’t the only thing that’s unique about the Mind Bender. Whereas most multi-effects pedals use a toggle to switch between them, the Mind Bender has a footswitch to go from vibrato to chorus, an easy hands-free option if you want to change mid-set. You still get the standard speed and depth controls on the top of the pedal to give your vibrato the exact shape you want. This should be on anyone’s list of the best vibrato pedals.

Why a Vibrato Pedal?

Vibrato is what’s considered a modulation effect, a category of effects pedals that also includes tremolo, chorus, and phaser pedals. Pedals in this category use what is called a low-frequency oscillator, or LFO, to produce the desired effect. The difference between these types of pedals comes from what part of your signal is affected by the oscillation. In the case of a vibrato pedal, it’s your pitch that’s affected.

Vibrato is a common musical technique for vocalists, wind players, and orchestral strings. A player of a fretless string instrument, like violin or upright bass, achieves vibrato by moving their finger slightly down and back up the string that’s playing the sustained note. This doesn’t achieve the same effect on an instrument that uses frets, like the electric guitar—thus the need for a vibrato pedal if you want to achieve this effect.

In classical music, vibrato is used on sustained notes as a way to add musicality and cover potential pitch issues within the ensemble; it is also often employed by jazz musicians, especially vocalists and horn players. It is less prevalent in other popular music styles, like folk and rock. It’s often used as a subtle enhancement to the player’s overall sound, adding a touch of warmth and movement to your pre-existing sonic picture. It is certainly a more subtle modulation effect than a tremolo, which has a distinct Rockabilly flavor.

Because it is so subtle, the best vibrato pedal is one you can experiment with in combination with other effects to create some truly unique tones. This makes it a more versatile effect than tremolo and very similar in purpose to a chorusing pedal, so it makes sense that many vibrato pedals do both—you’re unlikely to be using them at the same time, and having both options gives you more versatility. The advantage of a more specialized vibrato-only pedal is that it gives you more options for how to shape your vibrato, helpful if you want to make the effect more present in your sound.