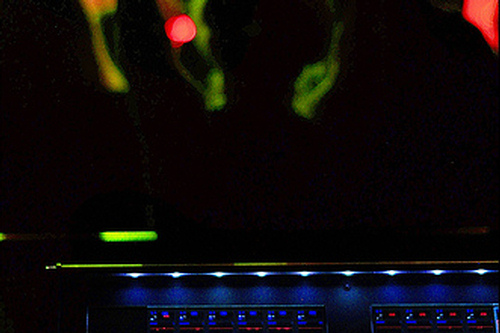 Photo by Stefan Schmitz / CC BY

in technology have made reliable mixing software a possibility, for a lot of DJs and sound technicians, there’s no replicating the touch you can give to knobs and faders on a physical piece of mixing hardware. Mixers are an integral part of any studio digital audio workstation and equally as important to DJs playing club gigs—though the demands the two groups place on their mixers are very different, and the right equipment for you is going to greatly depend on what you’ll use it for.

The best 4 channel mixers will give DJs plenty of flexibility while staying portable enough to travel easily from club to club, and can also suit the needs of small in-home recording studios. Whether your primary concern is ease of use, range of effects, or straight durability, one of the 4 models below is guaranteed to suit your needs. 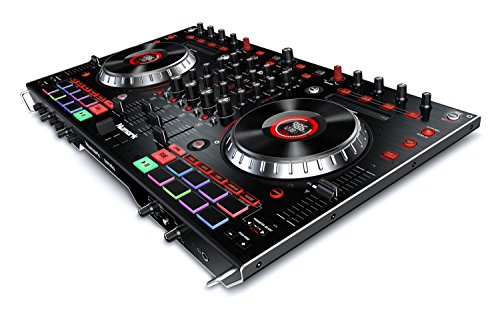 Numark is one of the leading names in DJ technology, and when you check out the NS6II you’ll understand why. It gives you all the features of a professional, premium DJ mixer, and even comes with a full version of the Serato DJ Pro software for all your digital mixing needs. It also has all the controls you need to mix without software, including two 6-inch jog wheels with multi-function and smart learning capabilities and built-in LCD displays.

Along with these, you’ll get the standard faders, pads, and touch-capacitive knobs you need. Since it has two USB outs, it’s perfect for battle DJs, letting you send the signal to two different laptops at once. Whether you use it as a stand-alone mixer or in conjunction with mixing software, it’s a powerful console that makes creating tracks easy. 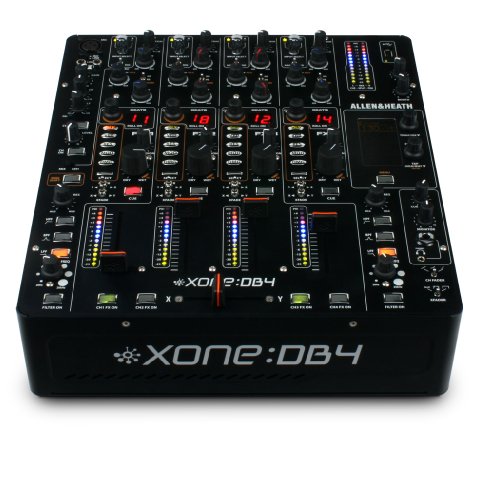 This is the ultimate mixer for a DJ. The sound from the DB4 is crisp and punchy with clear details, and the effects are not only fully-customizable but can be chained to give a dedicated filter to each effect. Upgrades over past Xone models include the addition of phasing and delay options and new stereo settings. This product (see full specs) would also be a great club mixer since it can work well with a wide range of mixing software and gives enough options to satisfy a visiting DJ’s digital audio workstation requirements. The extensive functions do mean a somewhat complicated interface, though those familiar with mixers will get used to it with after a little fiddling, and Xone has added some nifty features—like knobs that change colors depending on the mode—to increase its usability. It’s pricey, no doubt, but if you want the best 4 channel mixer period, this is it.
Allen & Heath Xone DB4 Overview // Kosmic 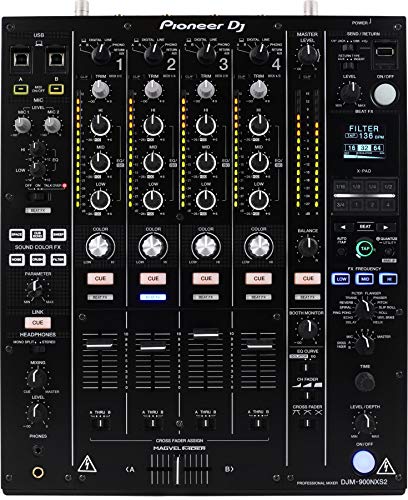 Pioneer mixers are the industry standard for clubs, and with the 900 Nexus (see full specs) they’re once again two steps ahead of the competition. They’ve added a touch pad to the display, letting you activate and control an effect with one swipe of your finger. It offers all the necessary effects, including upgraded reverb and roll effects, as well as an extensive array of echo, flanger, phaser, and delay options. New effects include melodic and spiral, an especially interesting loop and delay effect. The audio quality has also improved over past DJM models and the Nexus is Traktor certified, with timecode support and MIDI capability. This is easily one of the best DJ mixers on the market.
Effects & Review of the Pioneer DJM-900 Nexus 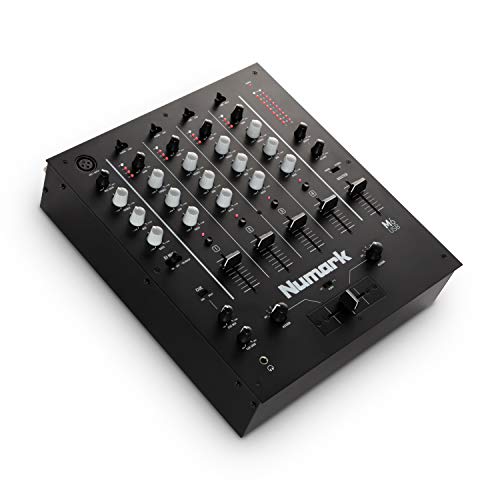 Numark makes their compact M6 mixer in a 2-channel, 3-channel, and 4-channel version to suit a variety of needs. Each input channel has an LED meter, as well as dedicated gain controls and a 3-band EQ. It’s designed to not only work well with the typical array of equipment, like CD players or turntables, but also to connect to a computer via USB. This is helpful both on-stage and in the studio, giving you the option to mix tracks from your computer and letting you easily record all your sets. It also has a dedicated channel for an XLR microphone, with a secondary mic input on the fourth channel. With an incredibly high quality sound output, this is a model to fulfil the needs of DJs of all levels. This is likely the best 4 channel mixer if you’re on a budget.
Numark M6 DJ Mixer Test

While they’re ultimately aimed at the same goal—the seamless manipulation of sound—a sound engineer in a recording studio places different demands on his mixer than a DJ on a club stage. Professional studio mixers tend to have more channels, as well as direct outs from the channel to the recorder and a secondary mix on a shared fader to monitor the overall recording output, instead of just the individual instruments. A DJ mixer omits these features. DJ mixers also typically have a global EQ (affecting the entire mix) in addition to channel EQs, and to have more sends to communicate with monitors. Since they get moved, used, and sometimes abused, DJ mixers tend to be built tougher, with knobs and faders that are easy to replace.

The best 4 channel mixers, in general, are intended and designed for professional DJ use, but that doesn’t mean they’re unsuitable for use in a home recording studio. It can be easily adapted by turning off the global EQ and using the busses (places where the channel outputs meet) to send an isolated signal to your digital audio workstation. While you may find you never use half the available features in a home recording setting, it might still be a cost-effective alternative to larger mixer with more channels.

If you’re shopping for a mixer, you should know the abbreviation I/O, which refers to the inputs and outputs of the mixer. The number of inputs and outputs you need will be an important part of your decision. A DJ needs a minimum of two inputs and two outputs. For a live band, you’ll need enough inputs to handle all the microphones and instruments, and enough outputs for your monitors and speakers. If you’re using the mixer to record, you should think about how many instruments you’re recording simultaneously—if you’re recording a band as a unit, you’ll need more inputs than if you’re recording each part separately and then mixing at the end. Even a fantastic mixer will be of no use for you if you can’t plug in every piece of your set-up, so make sure you check the mixer’s I/O before making a purchase. Generally speaking, the higher-end mixers are going to give you more input and output options; the more complex your needs, the more inputs and outputs you’ll want to have. Good luck!