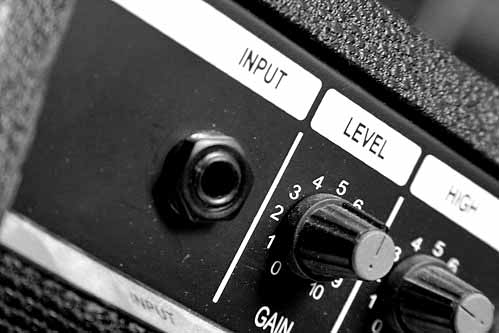 Photo by Hannes Schulz / CC BY

pedal modeling were first used by keyboardists in the early days of digital amplification. By the mid-’90s, this technology shifted into the guitar amp and effects pedal, opening its possibilities. Only in the modern day, though, have manufacturers started to include bassists when they make modeling equipment.

If you’re a bassist looking to expand your tonal palette, you’ve come to the right place. You can get amp models in two main forms: as a function of your amp or in an external effects pedal. We’ll look at two of our favorites from each category below, comparing their features to help you see the difference and figure out which one’s right for you.

These are our recommendations for the 4 best bass amp modelers on the market: 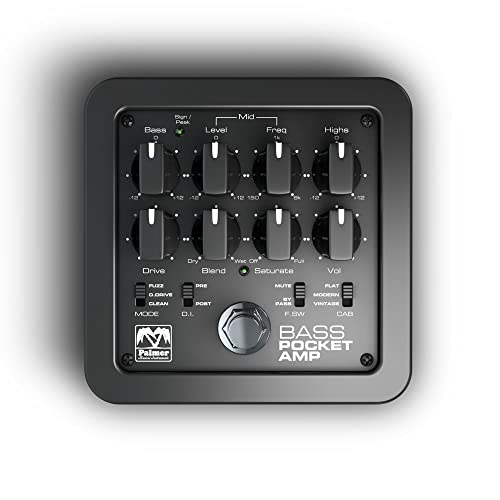 The Pocket Amp line from Palmer brings together a lot of useful tools in one compact package. You can use it as a preamp, with a 3-band semi-parametric EQ tuned specifically for bass guitar. It even functions as a super-portable practice amp thanks to the headphone output. It’s probably the only bass practice amp you can throw in a backpack and take with you anywhere.

The amp modeling on the Palmer Pocket Amp (see full specs) is what’s really impressive, though. It has three distinct modes—clean, overdrive, and fuzz—each with shapeable saturation and drive. There’s also a switch for choosing your style of cab: flat, modern, or vintage. Combining all of these controls together is what unlocks the true power of the Palmer Pocket Amp. Whether you want a modern tone or a vintage tube emulation, you can find it with this amazing little box. 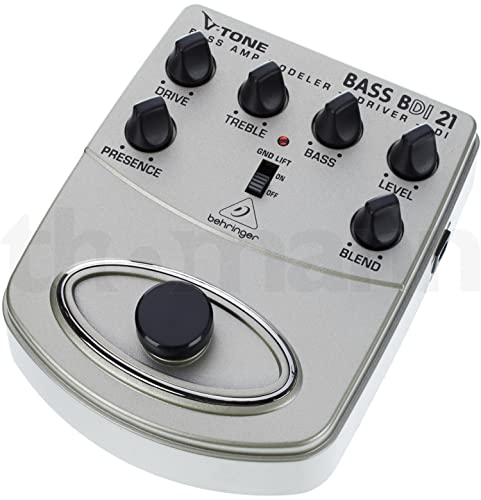 Behringer is a name you’ll definitely want to know if you’re looking for bass amp modeling. They have a couple pedals in their catalog that can give you high-quality amp models in surprisingly compact and affordable effects pedals.

Of these, our favorite is the Behringer V-Tone BDI21. This all-analog stompbox is maybe the most versatile bass pedal you can get in this price range. You can use it as a DI box or a preamp for the studio as well as an amp modeler. The wide array of tone-shaping controls let you fine-tune your sound, with a blend control for mixing the effect back in with your direct signal.

The models included in the Behringer V-Tone are impressive in both their number and their sound quality. From funky slaps to heavy metal distortion, from classic ‘60s-era tube tones to ultra-modern electronic fuzz—you’d be hard-pressed to name an amp sound you can’t get out of the Behringer V-Tone. It’s one of the best bass amp modelers for the money. 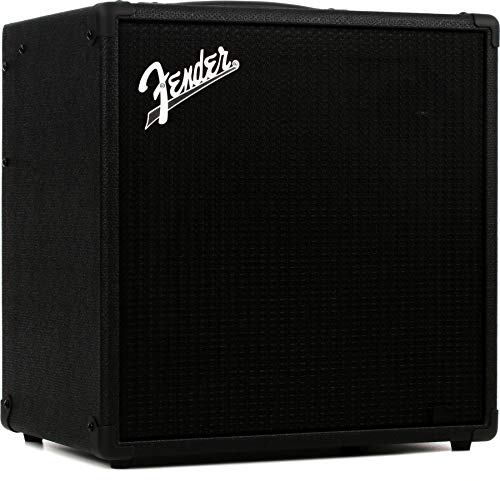 You won’t find many bass-specific amplifiers that include modeling features, but they are out there if you search for them. The Fender Rumble Studio 40 is one prominent example, giving you both top-notch sound and the most modern technological advancements along with the modeling feature.

The Fender Rumble Studio (see full specs) starts with a 10” woofer for the bass and powers it with a 40-watt head. It also has both headphone and USB outputs and wi-fi built right in, expanding your connectivity options to work beautifully both in the studio and on the stage. It even has an on-board looper for multi-layered basslines and effects.

Of course, since this article is about modeling, that’s probably the main thing you’re curious about. You’ll find a variety of pre-sets based on specific artists’ sounds already loaded in the amp when you get it. You can download a ton more for free through the Fender Tone app, giving you access to a seemingly infinite array of amp models and sounds. All in all, you can put the Fender Rumble 40 down as the most versatile and arguably the best modeling bass amp out there. 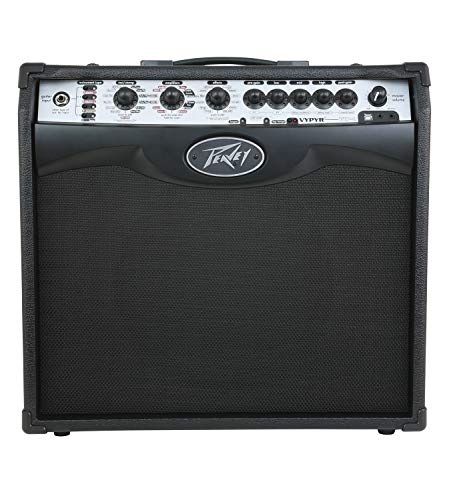 As far as full modeling amps go, the Peavey Vypyr is another excellent option for bassists. This versatile digital amp head is built to work for both guitarists and bassists, and can even work for acoustic instruments if you have a USB mic to connect to it. Along with the 40-watt version linked to here, it also comes in 20-watt and 100-watt sizes, and while you’ll pay more the more power you need, all three are impressively affordable.

The Vypyr can be this versatile thanks to its Variable Instrument Input, which lets you choose from any of the 10 instrument models, which include rarer options like sitar and electric violin. The cabinet that comes included with the combo is loaded with a single 12-inch speaker that’s custom voiced to suit whatever instrument you plug into it.

As far as the models go, the Vypyr comes with 6 bass amp models, 6 acoustic amp models, and 36 guitar amp models. Any instrument that plugs in can access all the models, too. This opens up a lot of possibilities for you as a bassist to play around with guitar amp sounds. You can also send your modified tone to headphones for silent practice, or straight to a DAW for in-studio effects. With all these options, it’s hard to imagine how someone wouldn’t get their money’s worth out of the Peavey Vypyr.

The big decision you have to make when you want to delve into amp modeling is whether to get them on an effects unit or as a feature of a full amp.

As a general rule, an effects pedal is the better choice if you’re mostly experimenting with new sounds. It means you’ll get to start from the same bassline sound you’ve already perfected on your main amp, which shortens the adjustment period. A pedal is also going to be cheaper and more convenient to transport and store.

The main advantage of modeling amps is that the models tend to sound more realistic when they’re coming straight out of an amp. If you’re planning on performing live using an amp model, the Peavey Vypyr or the Fender Rumble above is generally a better option than either of the stand-alone units.

The truth is, modeling technology has come a remarkably long way in even the last decade. If you haven’t experiment with amp models in a while, you’ll likely be surprised by the accuracy and realism some of the models on these units accomplish. We hope this article has inspired you to get out and try some of these amp models for yourself! Each, in its own peculiar way, makes it the best bass amp modeler around. Good luck!