Photo by bruthanick / CC BY

synth arpeggiation effect is a staple of electronic genres. You’ll also hear it used in classic rock, prog rock, and a plethora of other popular styles. Many modern synths offer some kind of arpeggiator, although they vary widely in quality and how much control you get over the effect.

These days, a lot of people turn to DAW software when they need an arpeggiator. Programs like Ableton and Logic Pro X include this function, for example, and give you a lot more control over the effect than you’ll find on the traditional synth. There’s something to be said for having the effect built right into your hardware, though. A tactile connection to the music can be especially important for live performance and improvisation.

We’ve rounded up favorite modern synth arpeggiators. We’ve focused on the hardware, namely synths that have a quality arpeggiator—and you’ll likely be surprised how affordable some of them are.

These are our recommendations for the 4 best synth arpeggiators on the market:

The Behringer Deepmind 6 is a lot of synthesizer in a little package. It’s a 6-voice analog polyphonic synth, packed with a suite of effects and tools that let you really take control of your music. Electronic composers and DJs especially will love the Deepmind’s connectivity. You can work it hands-on or control it remotely from a laptop, making it easy to integrate into your creative space.

The arpeggiator on the Behringer Deepmind is more sophisticated than you might expect for a mid-range synthesizer. You can create custom arpeggiation patterns up to 32 steps long. There are also a large variety of pre-set patterns and timing options. Add in the switch latching and tap tempo button, and this is one of the most comprehensive arpeggiators, period.

The Behringer Deepmind 6’s greatest strength is also its main disadvantage: there are so many features that the learning curve is pretty steep. Making the most of this powerful synth will mean spending some quality time going through the controls, manual in hand. If you’re willing to put in the effort, though, the Deepmind’s arpeggiator is just one of the impressive tools that’ll be at your fingertips.

DSI synthesizers are some of the preferred models for both recording professionals and live performers. If you’re looking for a fully functioned synthesizer that will give you an exceptional arpeggiator—and a whole ton more—the DSI Prophet Rev2 is a prime option for you.

The DSI Prophet Rev2 is a 16-voice 61-key analog synth. We could spend this whole article listing its features, but suffice to say it can do everything you expect from a synth (and then some). It’s an ideal instrument for keyboardists because of the semi-weighted keys, which make it feel more natural to play.

As far as the arpeggiator, it’s just as impressive and comprehensive as the synth on the whole. It supports note re-latching and note repeats, and can be synched to an external MIDI clock. The arpeggiator is part of the polyphonic step sequencer, which is one of the most powerful on the market. You can get up to 64 steps and up to 6 notes per step for truly multi-tonal performance. Unique sequences can also be layered, modulated, and stacked, for even more complexity and freedom.

The DSI Prophet Rev2 is not unusually expensive for a synthesizer, but that doesn’t mean it’s cheap, either—it’s among the priciest options on the list. Though this may price it out of contention for students and hobbyists, professionals of both the stage and studio will find the feature-rich Prophet Rev2 a worthwhile investment. 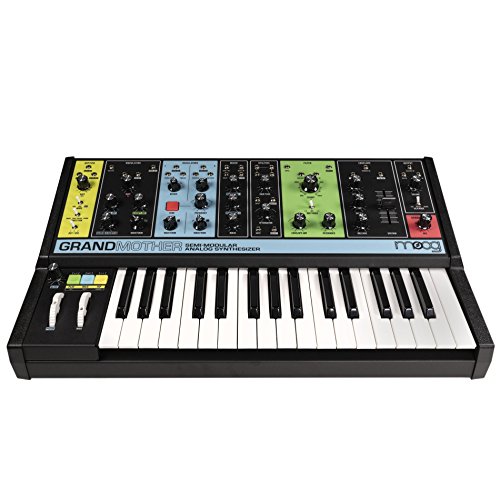 Moog is a name synonymous with synthesizers. Their extensive catalog offers a synth for every situation. If your main concern is the arpeggiator, the Moog Grandmother is the model you want to look at. It’s an analog synth with both a sequencer and an arpeggiator built in. While it’s designed to work seamlessly with other Moog synths, it’s a powerful stand-alone option as well.

Ease of use is one thing we love about the Moog Grandmother (see full specs). Since it’s semi-modular, you can start using it out of the box, no patching needed. Combined with its mid-range price tag, that makes it appealing to both advanced hobbyists and budding pros.

The Moog Grandmother doesn’t have as many effects and features as other synthesizers. Instead, it does a few things very well—such as its arpeggiator, which is both powerful and easy to use. It has four dedicated interface jacks, as well as a USB MIDI connection and a DIN-style MIDI input. The arpeggiator controls are fairly standard but it gives you everything you need, including the option to randomize the notes or change the octave. All told, the Moog Grandmother is easily one of the best synth arpeggiators you’ll find. 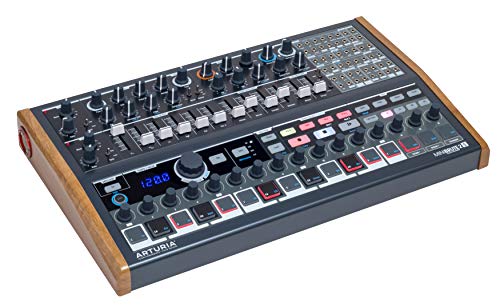 If you’re looking for a synth arpeggiator on a budget, the Arturia MicroBrute is right up your alley. It’s a compact and affordable desktop synthesizer with both an arpeggiator and a step sequencer built in. It functions just as well as a stand-alone synth as it does plugged into a modular system, making it a versatile way for any sound engineer to add a powerful arpeggiator.

The arpeggiator on the Arturia MiniBrute is easy and fun to use. Use the pad to play notes, then loop them forward, backward, or randomized. You can adjust the timing of the arpeggiation easily, too. In combination with the step sequencer, looper, and recording modes, this little synth has a lot of creative potential.

The lack of a keyboard can be initially jarring if you’re used to traditional rather than desktop synths. Learning to use the pad to input notes doesn’t take long, though. If you’re on a budget, it’s a small sacrifice that will give you one of the best synth arpeggiators for the money.

If money is no object, the DSI Prophet Rev2 (see full specs) is the clear winner, both in terms of the arpeggiator and the overall features and performance. That’s not to say it’s the best choice for everyone, however.

All four of the synthesizers above have a lot of creative potential in the right hands. Think about your budget, and what features you may want besides the arpeggiator. With a little bit of thought, you’ll be able to find the best synth arpeggiator for your needs. Good luck!