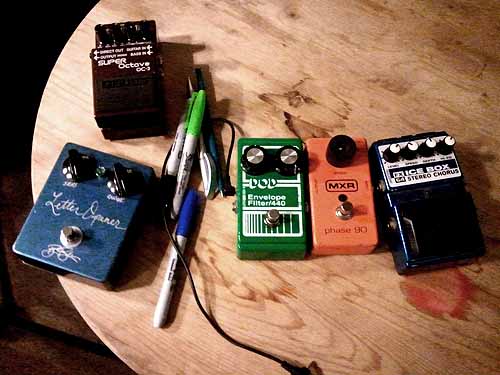 Photo by Venus Kitastojgawasic / CC BY

filter is one of the most recognizable effects in the guitarist’s arsenal. If you’re looking for the funky, ’70s era sound popularized by such greats as Jerry Garcia, there’s no substitute for an envelope filter in your effects arsenal. Though it was popularized in the disco era, this unique effect has had a lasting power and can add extra color for guitarists in a variety of styles and genres.

All envelope filters use the same basic process: they use the amplitude of the notes you play to add the effect and gives your sound a vocal quality. The exact settings and features the pedal offers and the subtle ways it shapes your sound are the most important things to consider when you’re shopping for an envelope filter.

The four below can be considered among the best envelope filter pedals on the market: 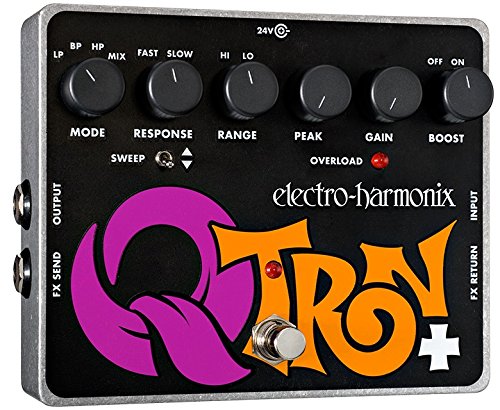 No list of modern envelope filters would be complete without mentioning the Q-Tron, the classic effects pedal from Electro-Harmonix that remains a top choice for professional guitarists. This modern, updated version of the pedal expands the features of the original while keeping the iconic sound.

It gives you four filter modes: low pass, band pass, high pass, and mix, which combines band pass with the unprocessed sound. On the fast setting, the response control gives you the same response as the original Q-Tron, while the slow setting gives it a smoother, more vocal vibe. The gain and peak controls give you further control over the volume and intensity of the effect. Hands down, this is one of the best envelope filter pedals for the money. 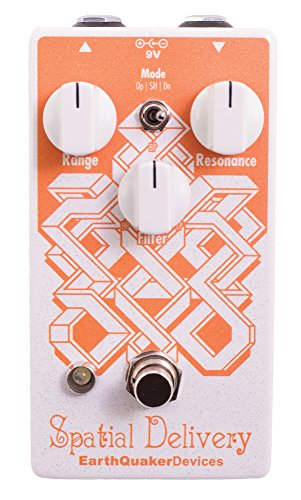 If your main consideration for an envelope filter is its versatility, the Spatial Delivery from EarthQuaker is a pedal you’ll want to investigate. It’s also the most affordable pedal on this list, making it an especially appealing option for gigging musicians who play in a variety of different genres and styles.

The interface on this pedal has three knobs. The top two control the range and resonance, while the filter knob lets you fade between a high-pass and low-pass filter, with a band pass option in the center. There’s also a toggle for selecting one of the three on-board modes. The overall result is a pedal with a straightforward interface that’s easy to use and adjust while still giving you full effect customization options. This is easily among the best envelope filter pedals on the market. 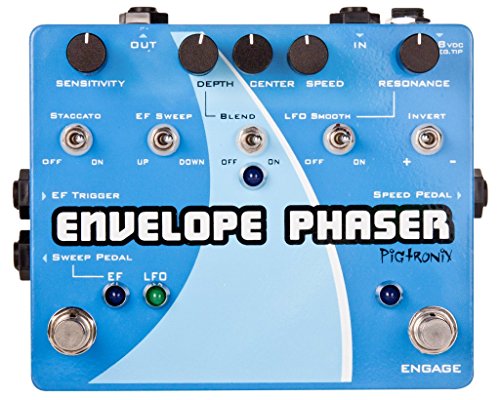 The EP2 builds upon the traditional envelope filter and adds LFO modulation, letting you use them in tandem to create some truly unique effects. There are controls for speed and depth of the effect, as well as blend controls for combining the envelope and LFO signals. Along with these new tone shaping capabilities, the EP2 (see full specs) has all the necessary features, like a true bypass for your dry signal and a trigger input that lets you use a pedal to manipulate the effect. The new staccato function makes this effect perfect for funk and rhythm players, giving you even better articulation and clarity for fast-picking lines.
Pigtronix - Envelope Phaser EP2 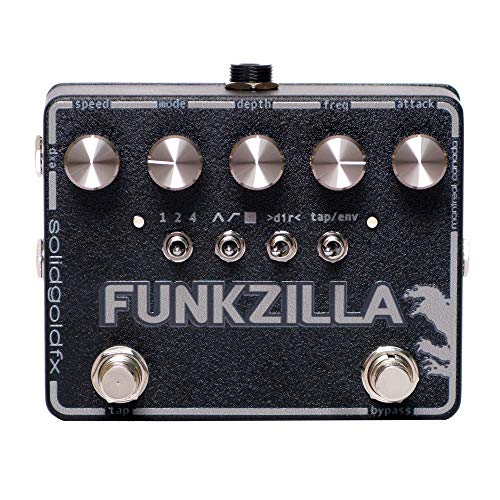 Aside from having one of the best names of any envelope filter on the market, the Funkzilla FX pedal from SolidGold brings you one of the most customizable envelope filter effects on the market. It has controls for the speed, mode, depth, frequency, and attack, with mode toggles that further expand your options. No matter what alterations you make to the effect, you’ll always have an all-analog path for your signal, maintaining its integrity so you won’t lose any color or tone. The inclusion of the custom Tap Tempo function is just the icing on the cake.

What Is an Envelope Filter Pedal?

The wah-wah effect is one of the most recognizable in the guitarist’s arsenal—one of the few effects or filters the non-musician can often identify. Even guitarists that use this effect, though, often don’t completely understand what the filter does to your signal. Understanding the intricacies of the effect can be a great benefit when you’re deciding exactly which filter is right for you.

Generally speaking, filters change the “shape” of your guitar’s sound—in other words, changes the relative level of the frequencies in relation to each other. Some of these, like high-pass and low-pass filters, have names that are relatively self-explanatory: high-pass lets the highs “pass through,” reducing the lower frequencies, and vice versa.

EQ is also a common filter, or more often a series of filters, which helps you to balance out the shape of your tone so it’s more even across the frequency range. These three style of filters are more concerned with improving the overall quality of your sound rather than adding additional color.

Envelope filters exert a much more noticeable influence on your tone than those mentioned above. The shape of an individual note is often referred to as the “envelope,” which encompasses the attack, the sustain, and the decay. An envelope filter increases the resonance of these individual notes, bringing out the frequencies of the note that give it that distinctive swell—the “wah” that has given the effect its more common name. Since the effect is generated by enhancing select frequencies of the notes you play—and is affected by the volume, gain, and frequency of the note—there’s far more variability in terms of what makes the best envelope filter than with more consistent effects.

Envelope filters essentially amplify aspects of your tone that are already there; the strength of your attack and particulars of your technique will greatly influence the ultimate sound you get, and it’s entirely possible for two players using the exact same set-up to get completely different effects out of the same filter. Because of this, you may find it worth the investment to buy an envelope filter that gives you more tone-shaping options even if you don’t play in a wide array of styles or plan on doing much experimenting with your sound.

While you often hear them referred to as wah pedals, this is not always an accurate description of envelope filters. Some do come with footswitches and some can be controlled by using a pedal (though you’ll often need to plug in an external pedal to do this) but some of the most renowned envelope filters take a more passive role in your overall set-up. Consider whether you want to have this level of on-stage control over when you wah—and if you think there’ll be times you want to turn it off entirely, make sure your filter has a true bypass for the dry signal.

Many of the best envelope filter pedals have a lot more switches and dials than your typical effects pedal, and will give you a correspondingly broad array of tones. With enough tweaking, you’ll be able to find the tone you’re looking for; picking a filter suited to your performance style may be the more important consideration.