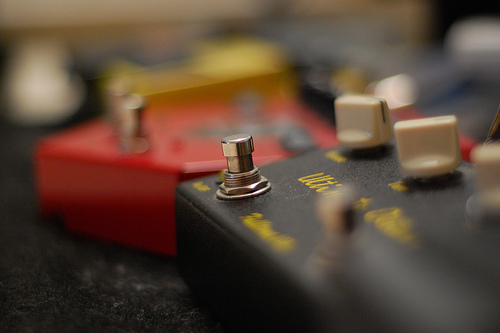 Photo by Michael Lee / CC BY

fuzz pedal is not a new effects option. You could in fact call it a standard, since it first became available to guitarists in the late 1960s, around the same time the stompbox effect in general started to become popular. Even though they’ve been around for a while, though, the wide range of sounds you can get from an octave fuzz pedal has kept them perennial favorites for both players and pedal manufacturers.

A quick search will bring you a plethora of unique and innovative variations on this classic effect. If you’re new to the effect, all of these options can be a bit overwhelming. If you’re searching for a new octave fuzz pedal, one of the options below is bound to give you the effect you’re looking for.

Here are our reviews of the 4 best octave fuzz pedals on the market: 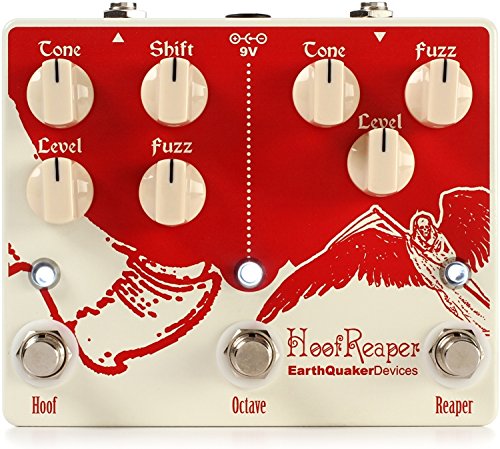 If you’re looking for a versatile fuzz pedal that can give you a wide array of different effects, the Hoof Reaper from EarthQuaker has you covered. The EarthQuaker brand has long been synonymous with innovative and high-quality effects pedals, and the Hoof Reaper just might be their most powerful offering yet. The name is a combination of two of their most popular past fuzz pedals, the Tone Reaper fuzz and the Hoof, their flagship pedal. With the Hoof Reaper, they combine these two effects into one stompbox, then throw in an analog octave feature as the icing on the cake.

The Hoof Reaper looks like it’s two pedals in one. It’s a hefty unit, with separate footswitches for the Hoof, Reaper, and Octave effects. Each of these operates independently of each other and can be used in tandem for seven possible configurations. There are also separate tone controls for the Tone Reaper side and the Hoof side, letting you adjust things like the length of the sustain and the level of distortion. Tweaking each side separately or using them together gives you a lot of options, and you’ll be almost guaranteed to get the fuzz you’re looking for out of this pedal. 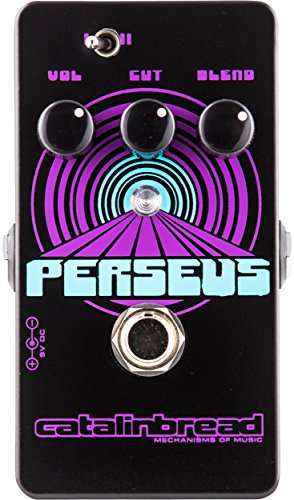 The Perseus takes an innovative approach to the octave fuzz, giving you the option of either one or two octaves blended into the fuzz. You can control both the number of octaves and the amount of fuzz independently using the simple three-dial controls.

More so than other octave fuzz pedals you may have tried, the Perseus can react very differently with different amp, guitar, and pickup configurations. Players will often either love it or hate it, so it’s a good idea to listen to a few samples or try it out before you decide. It typically has the most appeal to metal players because the fuzz tends to be very aggressive, but can be an interesting effect in any genre. It’s ideal for use with solo lines, though you can also experiment with the fuzz alone for rhythm lines. Hands down, this is among the best octave fuzz pedals. 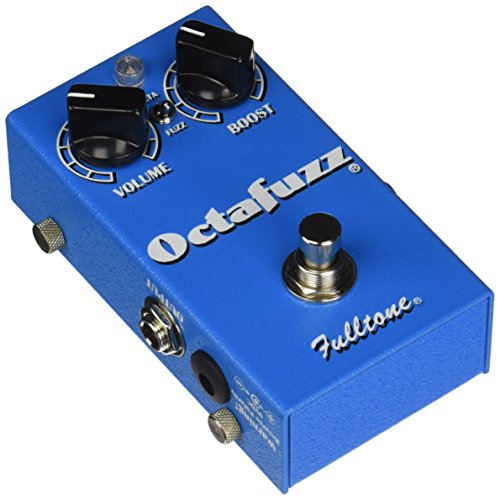 For those players looking for a more classic, ’60s era fuzz, the Fulltone Octafuzz fits the bill. It uses an exact copy of the circuitry from the Tycobrahe Octavia, putting it in a rugged and compact 14-gauge steel enclosure sized to fit easily on any pedal rack.

The controls on the Octafuzz are as simple and straightforward as its effect. The main focus here is on the sound. It produces a consistent effect across different brands, styles, and configurations of gear, and works well in tandem with other pedals. Don’t let the simplified interface fool you into thinking you can’t customize your tone, either. Adjusting the level of fuzz can give you a variety of sounds, from thick, nasty distortion to a synth-like ring.

Electro-Harmonix is a leading name in guitar electronics, and their effects pedals are some of the most consistent and respected in the industry. Their pedals are affordable as well as powerful. For a song, you can get this late ’60s style vintage-inspired octave fuzz pedal, whose psychedelic sound and design will quickly make themselves at home on your pedal rack.

The controls on this pedal are simple and straightforward. You have three knobs for volume, boost, and octave, with a footswitch to activate the effect. There’s also a small toggle to select the voltage of the circuit. While it might sound old school, its circuitry on this pedal is modern and high-quality, giving you a tight sound and a rich octave tone. The housing is the nano-sized Electro-Harmonix uses for many of their pedals, which is both durable enough for gigging and compact enough to be easy to transport there. This is among the best octave fuzz pedals for the money.

Because the octave fuzz is such a simple and appealing effect, it has inspired lots of variations, each of which will bring its own distinct color to your sound. Your ears will be your best tool in deciding which pedal is the best match for your style. If you’re comparing pedals, make sure to use similar settings, giving you a comparison of the bassline effect and how it interacts with the rest of your gear.

Aside from the overall feel and sound of the effect, the variety of options will be an important consideration for some players. A pedal like the Earthquaker Hoof Reaper (see full specs) is more versatile to a wider range of settings and styles than a simpler model like the Electro-Harmonix (see full specs). If you’re the kind of player who enjoys tinkering with your sound and making subtle adjustments to your effects, a more complex pedal will give you more options to work with. If you prefer to find a good effect and stick with it—the “why fix what isn’t broken” kind of mindset—a simpler pedal may even be preferable, since it will be easier to get back to that ideal setting.

The best octave fuzz pedals are great additions to any guitarist’s effects arsenal. While it’s best-known for bringing that psychedelic, classic rock edge, these pedals can do a lot more than just imitate Jimi Hendrix. By giving you the option of using the octave and fuzz aspects of the pedal separately, they can often function like two effects pedals in one, giving your tone depth and color that are an improvement in any genre.