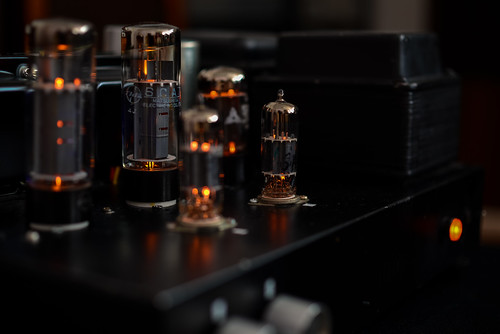 Photo by Yosi Oka / CC BY

6550 tubes – are they interchangeable, different, or, indeed, what are they?

Even people who have played tube amps their entire lives might not have given much thought to what’s inside them. Which is understandable. In the right conditions, these tubes can last the entire life of your amp. But for as little thought as you give them, the tubes inside your amp are incredibly important to your overall sound.

There are two different kinds of tubes inside a guitar amp: preamp tubes, that give the sound its color, and power tubes, that amplify the signal to speaker level. Even though power tubes don’t have as much impact on your tone as the preamp tubes, they’re still part of the overall package. A weakened or damaged power tube can reduce both the quality and the output of your tone.

The beam tetrode style power tube is one option when you’re shopping for replacement tubes. They’re more efficient than pentode designs like the EL84, one of the reasons they’re popular for use in guitar amplifiers. The KT88 and 6550 are two styles of beam tetrode power tubes you’ll find out there. But if they’re both the same style of power tube, just what’s the difference between them? Or are they interchangeable? We’ll break it down below, and then you’ll who’ll win in the Battle of KT88 vs 6550 Tubes.

Power handling is the main advantage of using a KT88 power tube in your amp. They’re the largest vacuum tubes in their class, letting them handle a lot more voltages before they blow. This is good news if you like to push your amps to their max, especially if you’re doing it in a full stack at large venues.

The main disadvantage of the KT88 tube from a guitar amp perspective is the low distortion level of the tube—they won’t add to your crunch when you crank the gain. This isn’t a big issue for some players, since most of your crunch will come from your preamp tubes anyway, but it’s the main reason they’re not more popular than they are with guitarists. 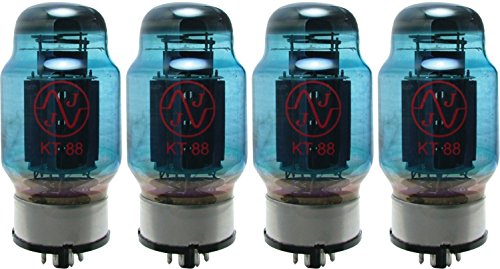 JJ Electronic specializes in replacement parts for guitar equipment. Their vacuum tubes are known for consistent reliability, with a long-lasting build and a quality tonal response. Their version of the KT88 riffs off of the classic design, pushing the power to an impressive 42 watts so you can get more output from your amp than ever before.

If your amp has visible power tubes, the blue glass (see full specs) on these ones is a nice unique touch. If not, you can still appreciate the power and sound quality, which are at the top of the class when it comes to modern KT88 tubes. 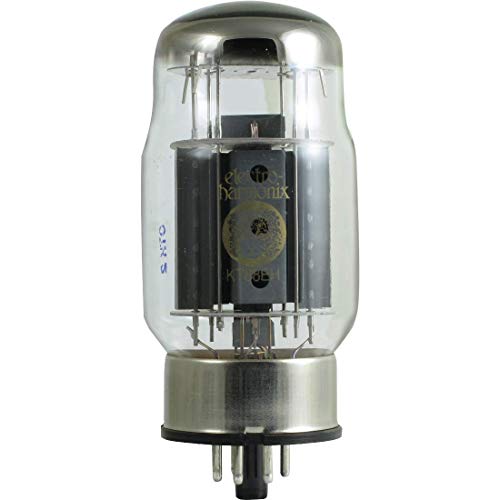 If you need a replacement tube that’s more budget friendly (though price fluctuations do happen), Electro-Harmonix has you covered. These effect pedal masters definitely understand the intricacies of the guitar tone and they bring that knowledge into their development of even the smallest components. The result is a KT88 tube that’s both highly reliable and a great value.

In terms of tone, the Electro-Harmonix KT88 has a very rounded sound. Its power handling is about standard, so it’s not the best option if you’re upgrading to get more volume. It’s an ideal drop-in replacement for British amps that use this style of tube, especially Marshalls, giving you the rich, vintage warmth of the original.

The first 6550 vacuum tube was introduced by Tung-Sol in the 1950s. Though it has a similar low-distortion design to the KT88, it instantly gained more popularity among amp manufacturers, specifically bass guitar amps. Their popularity isn’t geographically limited, either. You’ll find them in amps from American manufacturers like Ampeg, as well as those from British companies, like Marshall.

Stability is the 6550’s main advantage. These are durable, long-lasting tubes that can operate at high output for sustained periods without taking damage. For many players, this makes them more appealing than the KT88, even though they do have a slightly lower overall output (35W compared to 40W for the KT88).

Tung-Sol made the original 6550 power tubes used by Ampeg. If you’re looking for that classic tube amp sound—especially for a bass amp—you’ll want to check out the Tung-Sol 6550. They’re made to the same specifications as the original, so you can count on them for an authentic tone.

The Tung-Sol 6550 was basically the blueprint for beam tetrode power tubes made in the United States in the late twentieth century. They’ve continued to improve upon that impressive design, making the sound more dynamic and fully-realized than ever before. These tubes will faithfully amplify your sound to impressive levels of output. 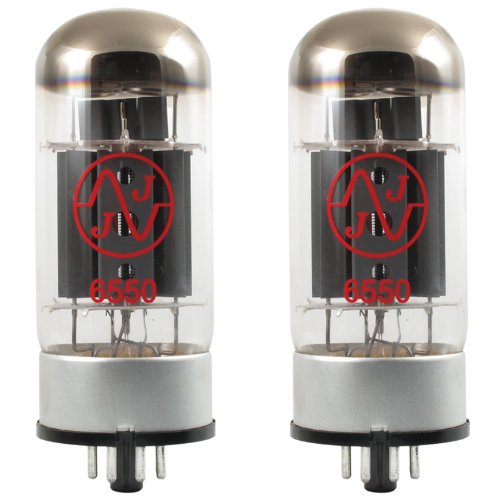 Another great option in modern 6550 tubes, the JJ Electronics 6550 is comparable to the Tung-Sol version in both price and function. It has a slightly lower power rating, so it won’t give you quite as much volume. On the other hand, the tone is fatter and fuller, making them a compelling choice if you want to emphasize warmth over output.

These JJ Electronic power tubes (see full specs) also get high marks for durability. Their consistent quality standards mean their vacuum tubes are always good to go right out of the box. They’ll also stand up well to even heavy use. Put them in your amp, and you can go back to not thinking about your power tubes for a good long while.

Both these power tube designs typically employ the standard octal plug, so one will fit into an amp designed for the other without modification. There’s more to swapping out a power tube than just plugging it in, though. While you won’t need to make any mechanical modifications when you swap from a KT88 to a 6550 (or vice versa), you will need to adjust the bias.

Some amps have a self-adjusting bias, but most amps rated 20-watts or higher will use a fixed bias. The bias is basically the variance between one tube and another when it comes to how much current they use. It’s a good idea to check on the bias and make sure it’s still within a reasonable range every time you change out the type or brand of tubes you’re using, and some people even do it every time they change their tubes, just to make sure. You can have this tested at a music or repair shop if you don’t want to buy the equipment to do it yourself.

As long as you check and adjust the bias, the KT88 and 6550 use the same basic design and can usually be swapped out for each other without a problem. Every amp is different, though, so make sure to do your due diligence of testing the tubes whenever you try a new style. This will prevent damage to all of your equipment and keep you sounding your best! Good luck!