Photo by DJpedia™ / CC BY

with phono preamps—in the modern era of digital recording interfaces, a lot of people think of these as anachronisms. The truth is, though, there are still a lot of reasons you might want to have this option on your mixer, whether you’re using it for live DJ performance, amplification of a live band, or as a tool in the recording studio.

The signal that’s produced by a turntable is phono by default and will need to be converted to an aux or line-level signal before it can be manipulated or played by other audio equipment. This is why you’ll still find a phono preamp on the majority of DJ mixers—they’re the group you can count on to still consistently use analog equipment. They’re not the only ones who might have use of such a feature, though. If you’re looking for a phono preamp in your mixer, check out the models below.

These are our recommendations for the 3 best mixers with phono preamps on the market: 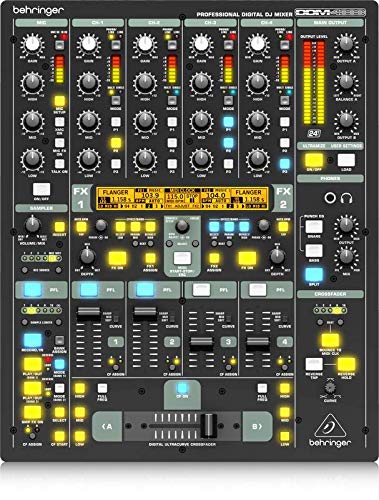 We’ll start things off with this impressive 5-channel mixer from Behringer, the DDM4000. Along with high-quality phono preamps, it has a variety of inputs for different signal sources, and all the tactile controls you need to easily add effects and shape your sound.

Each of the channels on this mixer has independent controls and programmable EQ. There is also a slew of useful tools like assignable crossfaders and a BPM-synched sampler so you can seamlessly record and loop. The on-board pre-sets let you save settings to pull them up quickly when you’re changing tracks or styles. The 4 stereo channels give you 8 inputs, and two XLR inputs for a mic further expand your options.

The DDM4000 has a built to match its impressive features. It’s solid, from the metal casing to the smooth action of the knobs and faders. This is an excellent mid-range option that has the functions and sound quality a pro DJ needs but is affordable and user-friendly enough for anyone. 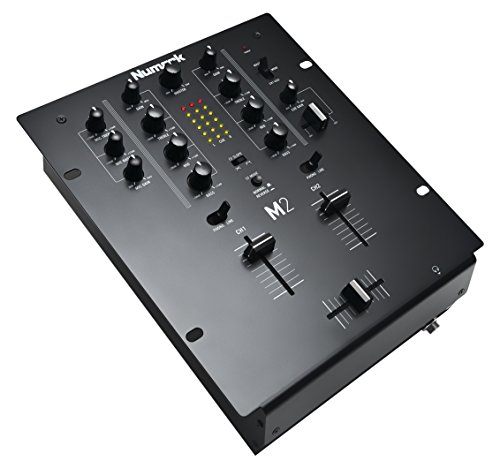 If you need a mixer with phono preamps on a budget, a 2-channel scratch mixer like the Numark M2 can be a great way to go. The simplicity of the interface makes it easy to work with, and you can’t beat the price.

The Numark M2 doesn’t have as many features as the other options on this list. You’ll get basic fader, level, and EQ controls for each of the two channels, but for sampling loops and adding effects you’ll need to use effects pedals or mixing software.

Another advantage of the simplicity of this model is that it’s the smallest model on the list. It weighs right around 8 pounds and will fit easily on any mixing deck. It’s built like a tank, too, durable outside and in and definitely road-worthy.

This is definitely a great option for battle DJs and venues as well as scratch DJs. Honestly, though, it’s a versatile little machine that will serve most set-ups well, with the high-quality phono preamps you need to make the signals from your turntable sound great. This should be on anyone’s list of the best mixer with phono preamps for the money. 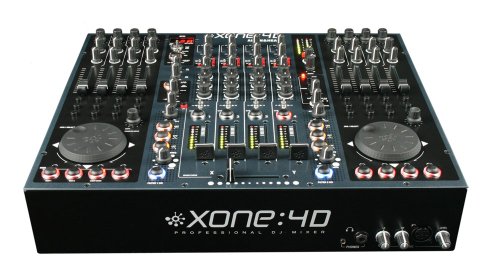 If you’re looking for something that’s both more traditional and more comprehensive, check out the Xone:4D. It’s the 20-channel option from Allen & Heath’s oft-touted Xone line, which includes mixing boards with a variety of channel and feature options.

You can see just from looking at it that this mixer has it all. It has the tactile controls most DJs are looking for, including dedicated EQ on each channel as well as tap temp control, analog filters, and more. It’s not stuck in the analog era, either. There are switches, faders, and jog wheels intended for use as a MIDI controller, all of which can be mapped to whatever function you need. The RIAA preamps are on three of the channels, and they match the rest of the board in quality.

We do have to say this is a mixer for professionals. It can function either in the studio or on the stage, but it’s definitely not a small unit, and it might set you back a pretty penny. If you need a full array of channels and functions, though, you can’t go wrong with Allen & Heath.

How to Choose the Best Mixer with Phono Preamps

All of these models will give you reliable, balanced tone across inputs and signal types. It really comes down to two things: the number of channels and the extent of the tactile controls. If you want a full array of faders and knobs, you’ll want to spend the extra money for something like the Allen & Heath above (see full specs).

The cost of a mixer tends to be proportional to the number of channels it offers. If you use a lot of signal sources, expect to pay a bit more for the inputs you need. If you only need a couple channels, though a smaller mixer like the Numark (see full specs) isn’t just a great way to save some money, it’ll also take up less space and generally be easier to both move and use.

Remember that you’ll only need a phono preamp on the inputs that are coming from a turntable. If you plan to use microphones, make sure the mixer also has mic-line XLR inputs. Also think about the configuration of the inputs and channels, and which signals you’ll want to be able to control independently.

If none of these mixers seem to do the trick, you do have another option. You can buy external phono preamps, like the one below: 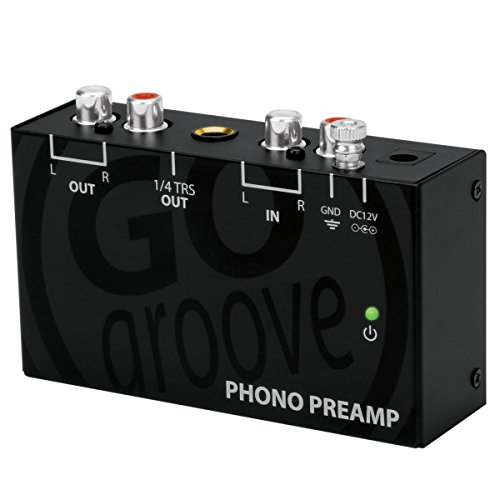 Just put this in between the turntable and your mixer. This does mean investing in a bit more equipment, but since these external preamps tend to be fairly affordable, it shouldn’t add much expense. It’s still a better option to find a mixer you like that has phono preamps built right in, since this will preserve the signal integrity and ultimately give you a better sound.

Mixers with phono inputs can be difficult to find, but that doesn’t mean they’re the outdated equipment some people claim. All three mixers on this list combine high-quality phono preamps with all the modern features a DJ needs. Depending on your wallet size, each could in its own way qualify as the best mixer with phono preamps around. We hope this has helped you find exactly what you’re looking for! Good luck!