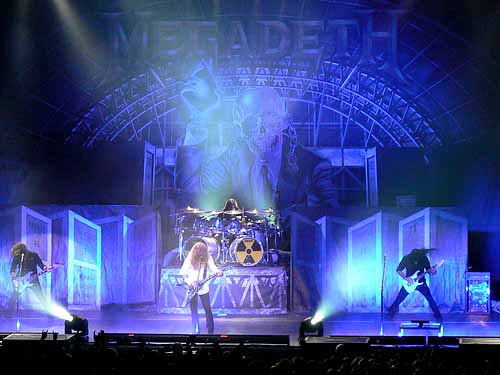 Photo by Nick Ares / CC BY

is one of the Big Four thrash metal bands that formed the scene as we know it. In all fairness, Megadeth songs could be described in many words, but ‘easy’ is not one of them. Even so, Mustaine did compose a handful of less complicated tunes, and we’re here to share some of those with you. These can be called among the easy Megadeth songs on guitar:

Symphony is both the easiest and most popular song Megadeth ever composed. It follows the typical song structure of verse-chorus-verse-chorus followed by a catchy solo that transitions into the pre-chorus, and finally, ending with a big, recognizable bang.

The reason why this song is the go-to for most beginner metalheads is that there are not many chord progressions. In fact, nearly the entire song (without the solo, obviously) requires only the last three strings to play.

Dave Ellefson made sure to keep the groove as simple as possible, which is a polar opposite of what he would normally do on songs such as Holy Wars or Peace Sells. Tempo-wise, Symphony of Destruction is also much slower than most of the tracks in the Megadeth catalog.

The Cryptic Writings album is often cited as the favorite for one side and least favorite record by Megadeth for fans on the other side. Objectively speaking, this album houses a myriad of exceptional songs, such as Use the Man, Mastermind, Vortex, and of course, the heavy-hitting Trust.

In a nutshell, Trust is a sort of a power-ballad when we look at its chorus while it’s a riffing rocker in all other aspects. The lyrics resound with personality and are very easy to relate to. Another ‘easy’ element of Megadeth’s Trust is, similarly to Symphony of Destruction, the fact that it can be played by most immediate beginner guitar players.

The only tricky part is the acoustic bridge in the second half of the song right before the solo. Even so, it’s just a couple of bars long, so it shouldn’t take you more than a few hours of practice to nail it down with pinpoint accuracy. The rest of the song is just a logical continuation of where it left off while the only ‘new’ elements are background leads and a slightly more pronounced back vocal.

The bass line offers slightly more variety while the drum patterns are audibly richer. Even so, this is still a fairly straightforward song, but even more importantly, a classic that doesn’t even need any introduction to most fans of metal music.

Countdown is also slightly shorter than most Megadeth songs (lasting only 4 minutes and 17 seconds). Its tempo shouldn’t be too much of an issue to tackle for beginner guitarists, and the only part that may prove to be a bit of a challenge is the harmonized melody near the end of the song.

Overall, give or take a few staccato-picked lines in the chorus, Countdown to Extinction is a simple, easy Megadeth song to play on the guitar.

We’re moving to the Last Action Hero album with Angry Again. Here’s a bit of trivia – this track was nominated for the Best Metal Performance at Grammy Awards at 1993. Its production is substantially more organic, and most fans who’ve followed Megadeth already know that the band was fairly interested in experimenting with tones and shapes by this point.

This is arguably the only song on our list that is not easy to play on guitar by default. The solos in the song, the chord progressions, as well as the licks themselves are a bit more diverse, but in its core, Angry Again is easy to learn while it may be a bit more difficult to play initially.

There are certainly more parts to memorize and a handful of counter-intuitive changes here and there, but compared to most of the tracks on Killing is My Business for example, it’s a breeze.

Let’s switch gears to Youthanasia with a ballad single that earned Megadeth a hefty bunch of fans that were not necessarily into their heavy sound.

A Tout Le Monde is probably difficult to pronounce by non-native speakers of the French language, but the song itself is very easy to play. The song features a mixture of acoustic and electric guitar licks, which makes it slightly more complex than distortion-exclusive tracks, such as Countdown and Symphony.

Most chord changes revolve around modulation techniques (not pedals), but there are also a few differences in terms of fretting and finger positioning. All things considered, it’s a simple, beautiful ballad that requires very little time to master.

We’re back to Cryptic Writings with She Wolf – a power ballad with beautiful lyrics, harmonies, and outstanding, bigger-than-life choruses.

If we assume that most metalheads know the basics of galloping techniques, Megadeth’s She Wolf should be a breeze. Namely, the most complex part of this song is actually the verse; even though the majority of the riff is played on the palm-muted open E string, the idiosyncratic galloping shape may take you a few tries to understand.

7. In My Darkest Hour

Peace Sells… but Who’s Buying? is one of Megadeth’s album that pretty much everyone loves. Most songs on this record can be considered as classics, and In Devil’s Island is one of the songs on it that showcases its full potential.

Even though beginner players may feel a bit discouraged by the solo in the intro, it’s actually just a mass of downward-spiraling notes that are fairly easy to handle. Devil’s Island is a traditional ‘rocker’ song with minimal chord changes and straightforward gallops.

It has a slightly faster tempo than most songs on our list, but it’s nowhere near Wake Up Dead or Hangar 18 in terms of complexity. The riffs naturally progress and revert back, although there’s one lick in the very middle that you may need to sit down for a few hours to learn. Again, even among so-called easy Megadeth songs to play on guitar, it’s still not easy-easy, if you know what I mean.