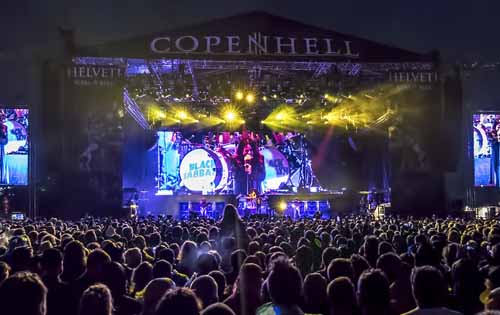 Photo by Al Case / CC BY

solos are meant to tell a story that singers can’t put to words, drummers can’t shape with regular patterns, and bassists can’t carve out with vibes and grooves. Let’s say you’ve mastered the Pentatonic scale and nailed a couple of simple solos – you want to up your game, but where do you start?

We’re here to give you a few hints regarding some of the best-sounding intermediate metal guitar solos by the giants of metal. So without any further ado, let’s get straight to business:

The Scavenger is one of the few Death songs where the riffs are actually a bit more difficult than the solo itself. More precisely speaking, even the intro and the bridges in this song can easily be called ‘solos’ in their own right.

If you’ve managed to navigate past the tricky chord progressions and counter-intuitive verses, you’ll probably have no problems playing the solo to this song from start to finish in one sitting.

The very beginning of the solo in Scavenger of Human Sorrow starts off rapidly. After which, it’s mostly focused on the harmonies and melodies. It’s definitely neither the hardest nor the easiest solo Chuck Schuldiner ever composed, but it’s a powerful, unique piece nevertheless.

Black Sabbath – Symptom of the Universe

The main reason every Black Sabbath solo feels so unique and exquisite is the fact that Tony Iommi lost his fingertips in an accident.

He devised a special set of tip accessories himself, dropped his guitar tuning down to C, and used atypical guitar strings. Even though his solos may not be as challenging technique-wise, understanding the way he deploys vibrato in his arsenal may prove to be a bit more difficult than you’d initially imagine.

The solo in Symptom of the Universe is relatively straightforward at its core. Be prepared for a bit of shredding once it kicks off, but don’t feel dissuaded by the sheer number of notes that are flying your way as most are fairly close to each other.

Jeff Waters is the mastermind behind Annihilator, and to be perfectly frank, he’s a monster of a guitarist. Aside from the fact that most of the songs in the Annihilator catalog aren’t necessarily ‘easy,’ the band’s solos are typically beyond difficult.

When you first listen to Bloodbath’s solo, you may fall under the impression that it’s fairly difficult. However, this particular solo has repeating patterns and despite the fact that it involves a bit of heavy picking action and shredding, it’s fairly straightforward.

The first minute of the solo involves rapid hammer-on and pull-ons while the second half is drastically slower. The only decently complex section is the final quarter of the solo, which combines all of the elements together.

Ozzy will always be associated with Black Sabbath. He is one of the founding fathers of the world’s greatest metal band of all time, after all. However, no one can dispute the fact that he’s had tremendous success with his solo career either.

Some of his tracks drift away from their metal roots and dive deep into hard rock, but that can’t be said for Mr. Crowley. Namely, the late Randy Rhoads ‘metalized’ this song with a magnificent, maybe even a bit over-the-top, solo.

This guitar solo is, first and foremost, remarkably melodic and packed to its boots with emotion. It does involve a bit of shredding, but its core is one of the most beautiful melodies ever played.

The Mr. Crowley solo will help you develop the flexibility of your pinky finger, as it is virtually impossible to play with three fingers exclusively. Even so, there are several sections where the solo drops the tempo to the point where even beginners could play it. Still, be prepared: it’s fairly technical in nature.

As the band that is practically synonymous with metal, it’s obvious that some of the most iconic solos were composed and played by Metallica’s very own Kirk Hammet. The Fade to Black is one of their slower songs, but it also has a gorgeous solo that is as much of a classic as its riffs and choruses.

In fact, we could even say that there are several solos in this monster of a song. The intro solo, the one right after the second verse, and the curtain closer. Each of the three is relatively simple to play, but you’ll have quite a bit of work memorizing your cues.

The Bat Country is a song of recognizable melodies and unique solos. You’ve heard it correctly: there are multiple separate solo sections throughout the song that are logically intertwined.

The first solo is simply an extension of the verse’s vocal line that slowly transitions into several smooth legato slides. The second part of the solo is a bit more traditional in the sense that you’ll get to refine your alternate picking while practicing it.

Now, the final solo is basically a hauntingly beautiful melody that is pretty easy to play, especially given the fact that the figure repeats itself twice. The reason why Bat Country’s solo is an intermediate-level one is that it entices several layers of well-orchestrated parts, touching on multiple guitar-playing techniques, beginner and otherwise.

Ghost is one of those bands that heavily rely on melody and harmony. Tobias has a unique voice and makes sure to get the most out of each instrument and section without leaving solos to the wayside.

Even though this may not be the band that first comes to mind when you think of intermediate-level guitar solos, Spirit is the song that puts Ghost in the big leagues in terms of both songcraft and shredding.

Now, this solo is not overly speedy or flashy, but it’s certainly not slow and sluggish either. The beginning of the solo invokes gorgeous two-guitar harmonies while the ending involves straightforward scale climbing. It’s the middle of the solo that will require your attention the most.