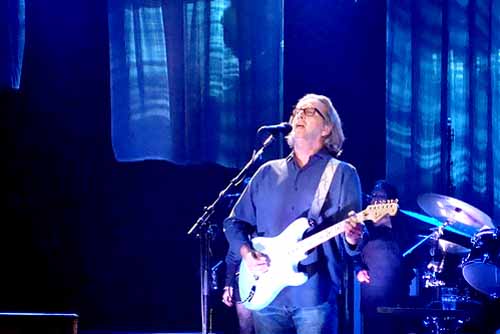 Photo by erik forsberg / CC BY

solo is the heart of any rock song – it’s what makes the difference between an iconic, classic song and an easily forgettable one.

Now, there’s a myriad of simple solo licks in the rock genre, but if you really want to impress your crowd, you may want to step up your game and start climbing up the ladder of intermediate players. These are some of the most iconic intermediate guitar solos that you should at least consider adding to your trick bag:

Kiss is arguably one of the most massive rock acts in the world, and if you’re a rock guitarist, you probably should take some time to learn at least a couple of their licks.

While most of their riffs sound bombastic, they’re relatively simple and easy to play. The situation is not the same with their solos, though – Vinnie Vincent, Tommy Thayer, and Ace Frehley are all tremendous solo guitarlegends, but there are still a few songs that they didn’t feel that showing off was necessary.

Such is the case with Calling Dr. Love, a four-decade old masterpiece that graced the Rock and Roll Over album that was released the same year.

This song represents Kiss at the top of their game, being full of party-rock vibes, memorable licks, and of course, a beautiful solo as a cherry on top of this gorgeous, hard rock cake. Even though this solo is relatively short, you’ll have your hands full of vibrato and tapping-styled techniques before you master it.

The Black Betty is one of the songs that withstood the numerous tests of time, staying relevant for nearly half a century to this day. This song is unsurprisingly short as it’s comprised of a single, relatively simple riff, but its upbeat solo is packed with a myriad of notes.

Now, the solo in this song will test both your patience and your fingers. It’s remarkably fun to play, but it’s by no means a ‘typical’ solo. Given that it’s so unique and virtually incomparable to shreddy lead guitar licks of its time, it’s a schoolbook example of an intermediate rock guitar solo.

The Free Bird is one of the simpler guitar solos in comparison to, for example, most Led Zeppelin or Deep Purple solos. However, it’s nearly four times as long when put back-to-back with a ‘typical’ solo of the ’70s and ’80s.

Fortunately, a good chunk of its parts repeat, but you will still need to memorize them all. The most technically demanding section of the solo hits off right in the middle. As a matter of fact, one could say it’s a ‘solo within a solo.’ Even so, it’s a lot of fun to both learn and play.

How To Play Lynyrd Skynyrd - Freebird

Peter Frampton – Lines on my Face

It’s relatively short, non-repetitive, and, most notably, it’s not exactly predictable. Unlike legendary rock shredders, Peter Frampton utilizes simpler licks in his Lines on my Face solo, which makes it a perfect choice for experienced rock guitar players who don’t mind a bit of blues in their favorite music style.

Styx is everything but a one-trick pony – this band has had so much diversity in their records, which is best showcased in their solo guitar-work. Even though it may not be the number-one best-charted song they’ve released, Renegade is definitely among their finest works.

While the song itself is pretty basic, the solo is by no means average. It involves a variety of stops, hammer-ons, pull-offs, slides, but more importantly, it will challenge you to scale the entire length of your fretboard.

There are also a few parts by the very end of it, although figuring out the first parts is where the main problem lies.

As far as the composition of the solo is concerned, it’s wonderfully crafted and adequate in terms of length. You’ll want to replay it multiple times once you get the hang of it due to its catchy and funky groove while its technical aspect will probably make you revisit certain sections at least a couple of times.

Overall, the most important thing that should be mentioned here is that the Renegade solo sounds terrific. Even though it is decades old now, it still puts many shredders to shame with its intricacy.

Here we have something a bit different – the solo in Sultans of Swing doesn’t have a speck of distortion (or fuzz), and even though it features quite a bit of repetition, you’ll have little room for mistakes.

Namely, solos composed (and played) on a clean guitar require surgical accuracy, so steel yourself before you begin stripping it down.

One of the main reasons why this is one of the most iconic solos in rock guitar history is its beautiful melody. It is so enjoyable to play, and due to its ‘technical requirements,’ learning it is also much more rewarding than figuring out a standard pentatonic-scale shreddy lick.

Let’s wrap it up with one of the most legendary solos from the iconic Eric Clapton – Layla. Technique-wise, this solo may be considered among the easier ones Eric crafted and played, but the real challenge is dialing in the correct type of ‘feel’ when playing it.

Simply put, learning it note for note won’t cut it; you’ll need to listen to the song and try to feel what Clapton tried to convey. The phrasing and attack are some of the most dominant elements in the Layla solo, both of which are not exactly easy to learn.

The best way to approach this solo is to observe different live renditions of this song and try to note the similarities and differences between them.