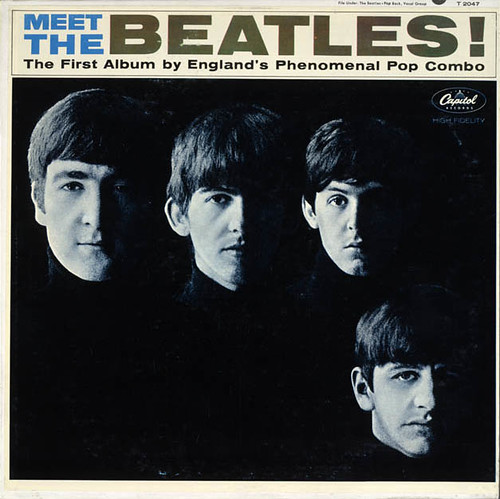 Photo by Fred Seibert / CC BY

revolution of rock and roll was brought to the world by none other than the Beatles. Some say they’re among the best-sounding bands in the world, the best songwriters, the finest musicians on the globe, but most people agree that they’re all of the above.

It’s pretty safe to say that every living soul has at least once heard a track or two from this glorious band, and many musicians aspire to learn how to play some of their tunes. If you’ve found that your favorite Beatles songs are a bit too complex or hard, take a look at our list of the best easy Beatles songs on guitars:

Help! is one of those songs that compels you to sing along, even if you don’t know the lyrics at all. Luckily for guitar players, Help! is also one of the easiest songs in the Beatles’ catalog, as the bulk of the focus rests on vocal harmonies.

This song has exactly two parts and three chords while the only tricky part is the bridge between the verse and the chorus. This is the only time where the simplistic chords are replaced with a couple of fast-plucked single notes.

The track is barely over two minutes long, and given that it’s comprised of a single chord change, it’s safe to say that most guitar players and bassists will be able to figure out these parts. Duct-tape them together, and you will have mastered Help!

How to play Help! - The Beatles

Now, I Feel Fine is slightly more complex than Help! as it features a couple of riffs where Lennon and Harrison play octaves. Again, we have a song that is dominated by beautiful voices of the four Beatles singing while playing, so obviously you shouldn’t have too much trouble tackling the guitar (or bass) parts.

I Feel Fine is a few seconds longer than Help!, and it’s also just a bit slower. Even though it’s not a schoolbook example of a beginner song, it’s definitely one of the easier songs the band had composed and played.

Penny Lane has been dominating the radio waves for more than half a century now, and rightly so if we may add. Though simple in its core, this song is brilliantly crafted, and its ability to take you on a rollercoaster of emotions can hardly be matched by other classics.

There’s a lot of accent on keyboards and bass in this song. Even Ringo doesn’t have too much work on his hands in Penny Lane, much less George and Lennon.

This song also features subtle hints of instruments you maybe wouldn’t notice, such as harmonium and congas. These sounds might be hard to replicate without a highly versatile FX unit, but since they aren’t the focal point of Penny Lane you shouldn’t worry too much about them.

All things considered, the masterpiece that is Penny Lane is a very simple, easy-to-play song that shouldn’t take too many hours off your practice schedule. It’s only three minutes long, and it has but a handful of cord changes that you’ll need to memorize.

We Can Work It Out

Here we have another short song that you should be able to pull off quite easily. However, it wouldn’t be completely accurate to say that We Can Work It Out is simplistic; there are two instances of tempo slowing down in the pre-chorus sections.

The band also switches over from major to minor scales during this time, which may be a bit confusing to some. In a nutshell, this is a fairly straightforward song that will test your knowledge of chords. Even so, it’s still decently simple in its essence.

We Can Work It Out Guitar Lesson - The Beatles

Eight Days A Week remains true to the joyous vibe of classy Beatles songs, but it’s also strikingly different in terms of rhythm and percussion. Here the chords shouldn’t be too challenging to master, just like the progressions and scales that are its building blocks.

This song is nearly three minutes long, and what makes it simple is its repetitiveness. It starts off with a very recognizable intro and immediately jumps into the verse, which resembles the chorus a great deal. As one of the slower Beatles songs, Eight Days A Week is a perfect fit for beginner musicians.

Some would argue that Ticket to Ride is neither easy nor simple. That is, to a certain extent, true due to the fact that the guitar, the bass, and the drums are all riding their own trains of thought.

This beautiful song is captivating, which should help you bring yourself to listen to it at least a couple of times before attempting to play it. The intro of Ticket to Ride continues on towards the verse, but you’ll notice that the drum beat and the bass don’t exactly match its vibe and feel.

A couple of bars before the song ends George Harrison plays a couple of notes that resemble a short, upbeat solo. This is the only portion of the song where it drifts away from the standard Beatles style of writing, and it’s one of the very few reasons why some of the most immediate beginners may find this song as a bit of a challenge.

Plain, simple, and largely straightforward, Words of Love is a cheeky upbeat song that showcases everything The Beatles stand for. It is comprised of four chords and two repeating melodies, and the reason why it’s so easy to play is that it is basically constructed with only one part in mind.

Once you’ve learned how it starts, you’ll know how it rides up until the end. These are no solos, cord changes, or tricky techniques to speak of, even though the exquisite feel each Beetle added to the fray might be impossible to replicate.

Nevertheless, this two-minute track is easily one of the simplest tunes the Beatles ever composed, and due to its minimalist design, it’s a favorite of many up-and-coming rockers, and possibly even metal-heads.