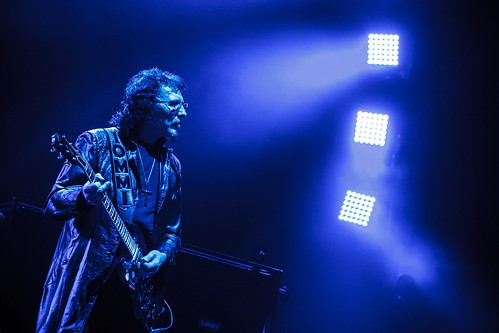 Photo by Jesper Hedlund/ CC BY

music is undeniably more complex and harder to play in comparison to most music genres, but that’s not necessarily the case for all bands and their tunes and records. If you’ve just started out as a musician and want to refine your chops before getting into heavy-hitter tracks, we’d like to share a few (relatively) easy metal songs that pretty much anyone can play:

The Black Sabbath is the grandfathers of metal, even though they’ve touched numerous other genres throughout the band’s diverse career. Their album Paranoid is a treasure trove of easy metal songs, and we’ve plucked Electric Funeral due to its outstanding dronish groove and a wild, fairly unexpected mid-section.

You don’t need to know any chords as this song is mainly played on single notes. In fact, it’s so simple and straightforward that the chances are you’ll be able to play it even if you never held an instrument in your life.

Around halfway through the song the tempo picks up, so you may need an hour or two to nail the octaves and harmonics. Either way, the song doesn’t have an actual solo, which is the reason why it takes the prime spot on our list.

Melodic, upbeat, and interesting through and through, Breaking the Law is one of Judas Priest’s all-time biggest hits, and rightly so if we may add. This rocking masterpiece beautifully explains how ‘less is more’ through minimal chord changes and a handful of riffs in total.

It’s less than three minutes long, which will leave you wanting for more, compelling beginners and seasoned players alike to mash the replay button over and over without ever noticing.

Dio entered the metal stage in Elf, fronted the world-renowned Rainbow, earned global fame as one of Black Sabbath’s singers, and went solo under his name. It would be a huge understatement to label him as anything short of God of heavy metal.

Holy Diver, along with Rainbow in the Dark, is one of the most popular metal songs of all time, but it’s also a remarkably easy song that is a staple in the arsenal of every beginner guitarist. Don’t be afraid to try your hand with the solo. It may last a few bars more than you’d expect, but it’s fairly easy to execute with enough practice.

With the accent being on the vocals, the groovy riffs merely accompany Dio’s voice, so you’ll only have to memorize a pair of chord changes to master it.

Iron Maiden – Run to the hills

One of the main reasons why most Iron Maiden songs sound a bit harder than they actually are is world-class production. Run to the Hills is one of their top-rated hits, as well as one of the simplest songs in their catalog.

Of course, Dave Murray and Adrian Smith coined the ‘galloping’ technique, which is the only thing that may prove a bit of a challenge as far as Run to the Hills is concerned.

Run To The Hills by Iron Maiden | Guitar Lesson

System of a Down – Science

Science is one of the B-side tracks from the band’s most famous album Toxicity, and we’ve picked it as it showcases Serj’s exquisite vocal prowess, Daron’s unique guitar skills, Shavo’s pinpoint accuracy on the bass, and John’s versatility.

This song is beautifully arranged, but it’s also remarkably simple at its core. Just like Iron Maiden songs are supposed to help refine your galloping technique, Science introduces beginner players to artificial harmonics, which are present throughout the whole song.

Just like Breaking the Law, System of a Down’s Science is less than three minutes long and it doesn’t feature a solo, so even the freshest guitar players should be able to nail it with ease.

System Of A Down Tabs - Science

The late Chuck Schuldiner was one of the most talented death metal singers and guitar players, and he’s often associated with mind-boggling riffs and solos, most notably from the band’s final albums, The Sound of Perseverance and Symbolic.

The Evil Dead is a track off of Death’s very first record called Scream Bloody Gore. Hand in hand with the title track, these two tunes are arguably the only ‘easy’ songs Chuck ever wrote.

Now, the intro of this song may leave you with the impression that it’s a bit difficult to execute, whereas the real difficulty lies in keeping up with the Evil Dead’s fast tempo.

However, the song features only two riffs (verse and chorus) that are going back and forth; this loop is cut by the solo in the very middle of the song, after which the song continues along the same lines and patterns.

Regardless of whether you’re a bassist, a guitar player or a drummer, Death’s Evil Dead shouldn’t be too much of a problem for you while it will help you pass the audition for any up-and-coming local death metal band.

Slayer was the band that introduced hundreds of thousands of people to metal, so most lovers of heavier music should know at least a couple of their riffs. We’ve picked Black Magic from Show No Mercy album not just because it’s easy to play, but also because it’s one of the most iconic metal songs of all time.

The main riff of this song basically sums it up. As a matter of fact, you could play this song from start to finish using nothing more than the last two strings (low E and A). Now, the only relatively challenging aspect of Black Magic is mastering the rapid picking style.

At the same time, learning this song will help you develop your alternate picking technique, which is the only pre-requisite to learning Black Magic. The solo hits off right at the middle of the song, and even though it sounds sinister and huge, it’s actually one of the easier thrash metal solos in the Slayer’s catalog.