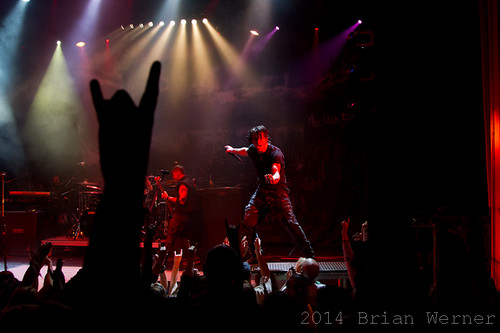 Photo by Brian Werner / CC BY

D tuning is often associated with ‘core’ metal subgenres (metalcore, hardcore), but the fact is that plenty of bands, artists and super groups use it just because it’s much easier to play riffs with it.

Drop D is a bit heavier than Standard E, but just like any dropped tuning, it provides the guitarist with the opportunity to switch between dozens of power chords (as well as gripping full ones) more freely.

Today we’re going to talk about some of the Best Drop D songs, so without any further ado, here are some of our recommendations if you want to explore this tuning a bit further:

1. System of a Down – Tentative

System is, without any shadow of a doubt, one of the most unique and idiosyncratic bands of all time. While we could argue which of their records was best, the undisputed fact remains that Hypnotize bought most metal fans around the world.

The sixth track on this album is called Tentative, and it’s a classic SOAD song in all regards – it’s extremely dynamic, the lyrics are semi-political, it has a massive singalong-type chorus, and beautifully emphasized backing vocals.

While the guys from the System camp mostly compose in Drop C, Tentative and a few others are excellent examples of their ability to compose songs in a slightly higher tuning. System of a Down withdrew from the scene a few years ago, and they’ve made a massive comeback with two singles and tour announcements.

System of a Down - Tentative ( Pearl Harbor - Smoother - Lyrics - HD )

The 2000s was the time of MTV and some of the most massive hits of all time. Last Resort was so big that there was not a single chance it could be ignored, regardless what genres rock your boat.

Starting from the very top, Last Resort has a huge intro that depicts the band perfectly. It’s bigger than life and allows the song to slides into the groovy, melodic riff that graces the song throughout its entirety in one form or another.

What makes this song relatable and relevant more than two decades after its release is its ‘woke’ lyric. Namely, Last Resort appears as a bigger-than-life catchy tune, but it actually addresses mental health in a very sublime way. It stood the test of time flawlessly, and it’s easily one of the best Drop D songs ever composed.

Tool is one of the very few bands that managed to achieve commercial success within the progressive genre, and Schism is their biggest hit with nearly 23,000,000 views on YouTube. In its very core, Schism is a relatively simple song; its main riff opens up the song, guides it along as the story continues, and closes it off.

Tricky time signatures are the reason why Tool garnered huge level of popularity among metal-loving folk, but even if you’re into smoother styles of music the chances are, you’re going to adore this exquisite band and song.

While Schism may be a bit challenging to execute by beginner players or even difficult to grasp by non-instrumentalists, the fact remains that it’s still a remarkably powerful song.

While we’re still at the topic of prog metal, we would be remiss if we left Opeth out. While this particular band may be slightly less popular among ‘traditional’ metal fans, the Grand Conjuration is a masterpiece that elitists hold in huge regard.

In fact, Grand Conjuration could easily contend numerous other awards, such as the ‘most dynamic Drop D song’, ‘most complex’, ‘best-produced’, or ‘best death metal song of all time,’ from the most objective point of view.

The musicianship this song showcases, especially the solos, shamed many advanced and experienced guitarists, but it would be fair to say that this particular track has inspired numerous artists to at least try their hand at playing/composing prog metal.

Avenged Sevenfold are the champions of the Drop D tuning, that goes without even saying. Now, the reason why we’ve picked A Little Piece of Heaven is that it highlights the band’s strongest points, as well as its quirkiness.

Dark and gruesome meet romantic along the lines of its lyrics while the official video is wild and crazy, even by today’s standards. Avenged sent a powerful message with this song – explicit imagery with impeccable musicianship will beat arena rock any time, any day.

A little piece of heaven is excellently composed, produced, and mastered, especially the little nuggets of violin and piano that are not in the original arsenal of the band’s instruments. We should warn you, though – if you’re faint of heart and not accustomed to ogrish content, you may want to skip on the video.

Drop D tuning is present in the emotional side of poppy rock too, and who would better represent it than Three Days Grace? This band is multi-million views strong, and Never Too Late is only shadowed by their track called I Hate Everything About You.

This song is best characterized with beautiful vocals and hauntingly eerie lyrics, and remarkably simple riffs. Even though the lyrics may hint at pessimism (or downright suicidal tendencies), the actual message of the track is much more powerful – never giving up and always pushing forward are the only ways to go.

7. The Darkness – Growing on Me

From progressive metal and over death metal, we’re finally down to classic rock with The Darkness. Growing on me was released back in 2003 and is found on the album Permission to Land.

This song is a called-for throwback to the 80s rock in terms of sound, tone, and production. The licks, solos, and drum shapes would make you think Growing on me maybe doesn’t have a spot on the scene of overly produced pop-dominated scene, but it’s the exact opposite of that.

The Darkness showed us that rock is perfectly fine, and that it will continue to be relevant and strong no matter how many decades pass.