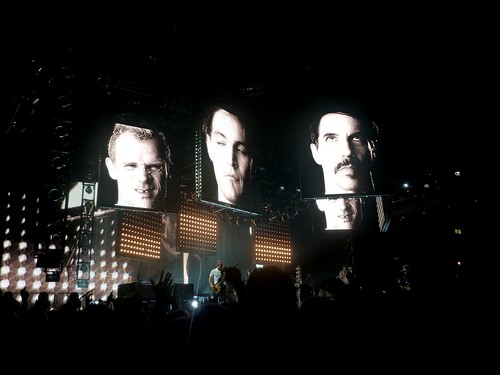 Photo by Lee Byway / CC BY

Hot Chili Peppers are a world-class act, and it’s fairly safe to say that they’re famous in all four corners of the world. Their catalog is vast and versatile, but their most popular songs are relatively simple.

Groovy, upbeat, and with a huge accent on party vibes, Red Hot Chili Peppers tunes are certainly attractive to guitarists, drummers, and bass players of all music genres.

One of the most iconic Red Hot Chili Peppers riffs is the main lick of Californication. It remains relevant even more than two decades after the song was released (1999), and one of the main reasons for this is the fact that it’s both beautiful and simple in its core.

The opening riff continues along the verses, and it’s comprised of gently picked single notes. Right after comes the pre-chorus, which features a couple of easy chords followed by Flea’s melodic bass lines.

Finally, the chorus is much similar to the pre-chorus, although it packs different chord progressions and lasts nearly half as long. Repeat this pattern twice and you’ll reach the slow, bluesy solo, which is as memorable as it is plain and straightforward.

Dark Necessities is a newer RHCP track, which was released in 2016, featured on The Getaway album. This song may sound a bit more complex than it actually is, mainly due to Flea’s slap bass techniques. In actuality, there are only a couple of guitar parts in this song that are almost fillers, giving way to Anthony’s vocals.

The only problematic part of Dark Necessities as far as guitar is of concern is the proper utilization of wah-wah pedal. The guitar parts are plain and simple, but playing them with the feel Josh played with may be a bit more difficult than it seems.

Even so, Red Hot Chili Peppers did an amazing job with this song, melding all the instruments together in a beautifully orchestrated upbeat symphony.

The Otherside is one of the most popular RCHP ballads. Again, like most of the songs in their catalog, Otherside is dominated by Flea’s bass and Anthony’s vocals while the guitar is mainly focused on filling the gaps.

This song is featured on the Californication album, so you will be able to easily notice similarities in terms of the leading riffs and licks, all of which are straightforward and very easy at their core.

The third quarter of the song takes the song in a different direction, featuring completely different riffs and creating an almost upbeat atmosphere that is rarely felt in ballads.

Before the song returns to the main verses and choruses, your job on guitar will mainly be to create controlled feedback with your amp and pedals.

Here is yet another ballad from the Chili Peppers, which is featured on the album called One Hot Minute from 1995. This song is mainly composed and performed on an acoustic guitar, and there are hints of electric guitar mainly in pre-chorus parts and the solo sections.

Repetitive and slow, My Friends is a beautiful, captivating song that is remarkably simple to play and learn.

Dani California is another massive hit that is featured on RHCP’s 9th studio album called Stadium Arcadium. This song is essentially simple, especially in the chorus and post-chorus sections, but the verses are just slightly more complicated.

In a true Red Hot Chili Peppers fashion, the guitar work in Dani California heavily relies on effect pedals, most prominently fuzz and wah-wah. The actual riffs are fairly straightforward, but the filling melody parts require a delicate, patient touch.

What makes this song one of RHCP’s easier guitar songs is the fact that the chord progressions are organic, the song becomes quite predictable as it progresses, and Anthony’s singing will basically lead you across the riffs if you get sidetracked at any point.

Even though the solo is decently simple, it’s fair to say that it sounds absolutely fantastic. Use your phaser and fuzz pedals liberally and you will master this track in no time.

The title track of the album with the same name is one of RHCP’s biggest singles. By the Way was released in 2002, and it’s one of those songs that remain memorable to this day.

By the Way doesn’t feature a ton of guitar riffs and licks, but the ones that are present in the song are as simple as it gets.

The only ‘hard’ lick is in the pre-chorus, where you’re supposed to palm mute ‘ghosted’ notes at a relatively fast pace, but with a bit of practice this will become natural, as well as a valuable tool in your arsenal for future RHCP covers.

7. The Adventures of Rain Dance Maggie

The Adventures of Rain Dance Maggie was released in 2011 and is featured on their 10th studio record called I’m With You. By this time RHCP had already established their funk roots, and most fans would argue that this is one of their most upbeat tunes on the album.

As always, Flea’s bass lines form the centerpiece of the song while guitars are tasked with creating a funky atmosphere with background fills. Verses are simple and feature little (to no) guitar parts, there are no pre-chorus parts, and the refrains are decently easy to play.

After the second verse you will get to play a beautiful solo, but be prepared to mash your fuzz pedal several times during the quick eight bars while it lasts.

Despite the fact that The Adventures of Rain Dance Maggie lasts nearly five minutes, all you’ll have to do is memorize two licks and the short & sweet solo.