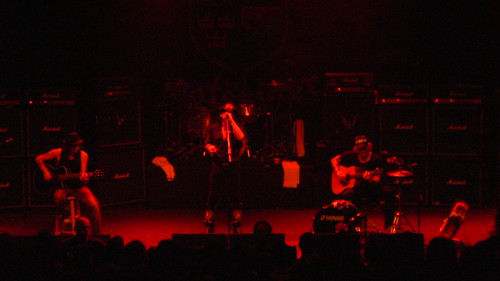 Photo by Metal Chris / CC BY

the grittiest and heaviest of all the music genres, characterized by loud, massive guitars, twangy basslines, and, of course, heavily distorted guitars. However, numerous bands saw the opportunity to create unique atmospheres by adding a bit of contrast with acoustic guitar pieces with outstanding results.

Today we’ve picked some of the best metal songs with acoustic guitar parts for you, so without any further ado, let’s get straight to them:

Insomnium has quite a few acoustic tracks in their catalog, although it’s pretty fair to say that Elder is the finest representation of their musicianship on steel-strung guitars. This band is renowned for their beautiful melodies and abundance of harmony in guitar-work, which described this song perfectly.

The intro riff of The Elder is actually a verse that is played on an acoustic axe, but there are also hints of it in the pre-chorus sections as well.

Katatonia is one of the most unique bands, as well as one of the few that can say that they have more than one ‘signature’ sound. They’ve transitioned across multiple metal sub-genres over the years, leaning towards a bit softer tone as time progressed.

Sanctitude is their live album, a performance captured at the Union Chapel in London, where they performed some of their best hits on acoustic guitars and percussions. Unfurl stands out more than most as it conveys thousands of emotions per second, casting joy and gloom alike with each beat.

This touchy tune is not a ballad per se. It’s not a ‘true’ metal track either, but it’s still one of the best-crafted metal songs that feature an acoustic guitar.

Metallica needs no introduction, much less one of their best hits – Fade to Black. The iconic intro of this song, followed by Kirk Hammet’s beautiful solo straight out of the gate was the introduction to heavy metal to millions of young metal fans. As a matter of fact, someone, somewhere at this very moment is practicing it or performing it live.

This song is also surprisingly easy to play, almost as easy as it is enjoyable to listen and strum along to. In a true Metallica fashion, the songs drifts away from the emotional licks towards heavier riffs right at the four-minute mark.

Even so, Fade to Black has a thread that lines all of its parts together – every single lick is as melodic as it can be, even though they’re conveyed with different notes and tempo.

4. Swallow the Sun – Pray for the Winds to Come

A few doom metal bands are as atmospheric and emotional as Swallow the Sun. Their Pray for the Winds to Come is a gorgeously crafted acoustic song that is accompanied by captivating lyrics and Jaani’s beautiful voice.

Even though this song has a few repetitive parts, everything is conveyed with a different touch. It would also be accurate to say that Pray for the Winds to Come is a story told with vocal cords and steel strings.

With this song, Swallow the Sun is showing us that true power of metal lies underneath the blocks of riffs, shredding, growling, and screaming – it’s in evocative emotions and the ability to paint with a broad palette of emotions.

Despite being a master of the electric guitar, the late Chuck Schuldiner was also tremendously skilled at putting emotions into the airwaves on an acoustic guitar. The Voice of the Soul is one of the most beautiful tracks from their final album, The Sound of Perseverance.

This is an instrumental piece that features an acoustic rhythm guitar with Chuck soloing on an electric guitar on top of it.

Mikael Akerfeldt is, without any shadow of a doubt, one of the most talented composers and musical geniuses of our time. Most Opeth songs in the past decade have at least some acoustic guitar parts in them, although that was not the case when the band started out.

Windowpane is a soothing, gloomy, and remarkably atmospheric tune that showcases the band’s inventiveness with unique sounds, terrific wordplay, and top-grade musicianship.

This song also features a bit of strings, as well as accompaniment and solo guitar parts on the electric guitar. As always, the centerpiece is Mikael’s exquisite voice that is utilized as the final, irreplaceable instrument, which gives the final, most defining touch to Windowpane.

7. Avenged Sevenfold – So Far Away

This masterpiece was written as a tribute to the late Jimmy Sullivan, better known as The Rev, who was the Avenged Sevenfold’s original drummer. Even though his shoes could never be filled, the legendary Mike Portnoy offered his helping hand to the band, recording So Far Away and bolstering their records on upcoming tours.

So Far Away is a heartfelt ballad that sounds beautiful, but in truth, it’s heavier than any brutal death metal song. The official video for the song features snippets of Rev with the rest of the band. If you’re a fan of Avenged Sevenfold, make sure to have a few napkins ready when you’re listening to it.

Avenged Sevenfold - So Far Away Acoustic Guitar Lesson With Tab

We’ve heard of death metal bands using acoustic guitars, but who would’ve thought that a steel-stringed instrument could sit so well in an extreme brutal death metal song such as Entwined by Vengeance?

Vital Remains is best-known for melodic shredding on the solo guitar, almost unfathomably rapid blast beats, monstrous guttural growls, and violently screeching guitars. It would seem that an acoustic guitar has no place in such a setting whatsoever, unless it’s played by Dave Suzuki, of course.