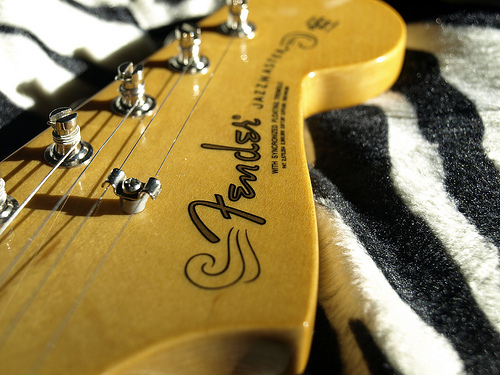 Photo by Serena / CC BY

quite a few iconic guitar designs in Fender’s history. The Telecaster and the Stratocaster get the lion’s share of the attention, especially when you’re talking about Fenders from the 1960s. The affordability of the Strat and Tele was one reason they were so popular, but the upper end of Fender’s catalogue at that time had its own groundbreaking designs. Of these, the most enduring are undoubtedly the Jazzmaster and the Jaguar.

The Jazzmaster and Jaguar represent a similar aesthetic. Both of them use a tremolo bridge, and the hardware in general is very similar. While the body shapes are slightly different, both of them use an offset waist so they’re more comfortable to play while you’re sitting. The biggest difference will be in the sound. The Jazzmaster is smoother and mellower, while the Jaguar is bolder with a biting edge.

There are a lot of more subtle differences between the two, as well, which you’ll see in the modern versions of the instruments reviewed below. After reading our reviews, you’ll get a handle on which guitar will win the Battle of Jazzmaster vs Jaguar:

If you’re looking for the best modern version of the classic Jazzmaster design and sound, this is the guitar you want to check out. It has all the features you’d expect to find on a Jazzmaster but with some improvements that make it an even better way to get that sweet, mellow tone the instrument is known for.

Let’s start with the improvements. The Fender Classic Player Jazzmaster (see full specs) has an improved angle for the neck that both makes it easier to play and gives the instrument a more consistent action. The 9.5” radius of the fingerboard and medium-jumbo frets work beautifully with this adjusted neck, giving you a more stable overall instrument than the Jazzmasters of old.

They’ve also made improvements to the hardware and electronics. The tremolo uses vintage styling but they’ve updated it with an Adjusto-Matic bridge that maintains the intonation much better than older guitars. The Hot Jazz pickups are designed specifically for this guitar by Fender, and while they still have the typical mellow tone they’re hotter than the traditional pickups, giving you more output and better sensitivity. This guitar is, in many ways, the ideal modern version of the Jazzmaster.

Now for the affordable end of the Jazzmaster spectrum. Like the Classic Player Jazzmaster, the Squier Affinity version maintains the spirit of the traditional instrument and pairs it with more modern details—but does it on a budget, giving you a really affordable instrument.

The main differences you’ll notice between this model and the one above are in the hardware and pickups. The Fender humbuckers that come installed on this guitar have a warm, fat sound, but aren’t quite as bold as the Hot Jazz pickups above. It also uses a simpler bridge, rather than the Adjusto-Matic. It’s still effective, but will likely require more mid-play adjustment than more sophisticated designs.

The angle of the neck and medium frets make the playing experience similar on the Squier Affinity Jazzmaster. The neck is a little wider, with a 12” radius, so while it might not be quite as comfortable for small hands it should feel natural if you’ve played Fenders in the past. The overall verdict is that, while you have to make a few sacrifices to get a Jazzmaster at such an impressive price, it’s still a durable, playable, and great-sounding guitar.

Now let’s move on to the Jaguar. The American Professional Jaguar from Fender uses the classic, subtle double-cutaway body shape and unique aesthetics of the original Jaguars. It’s a pro-level instrument, with an all solid-wood construction and top notch hardware. Similar to the Jazzmaster Special above, it takes the feel and vibe of the original ’60s Jaguar and pulls it into today’s world through their choice of materials and features.

The V-Mod pickups (see full specs) on this guitar are a completely new design, aimed to punch up the midrange and add more definition to the sound while still staying true to the vintage Jaguar tone. The result is a sound that has a lot of bite, with a clear, shimmering high end. The tremolo and bridge have also been improved. The Mustang saddles add a bit more stability and the tremolo uses a screw-in arm for more durability.

The playing experience on this instrument will be unique, as well. It uses specially-designed frets that are taller and narrower than standard medium frets. This makes it easier to bend the strings but can be harder on some people’s fingers, especially paired with the deeper C-shaped neck. This is definitely an instrument designed for a professional, providing stage-ready power and tone.

When you want an affordable version of a Fender classic, your first impulse should always be to look to Squier. Here, they’ve gone the traditional route with the Jaguar, and while it might not have all the updates you’ll find on the American Professional Jaguar, it stays truer in many ways to the original Jaguar design.

All the hardware on this model is vintage in design. It’s all chrome, which is great for both the look and the durability. The tremolo arm uses a floating, non-locking design that gives you a lot of flexibility for shaping your sustain. Paired with this hardware are single-coil pickups designed by Seymour Duncan and a range of on-board tone controls for bringing the best out of your instrument.

One point of note is that some players may actually find the Squier Jaguar more comfortable to play than the pro version. It has a slightly smaller neck and uses more standard medium-jumbo frets—not as high or sharp as the frets on the guitar above. Especially if you have smaller hands, you might like the feel of the Squier better, and sound-wise, it stays just as true to the classic Jaguar tone.

Jazzmaster vs Jaguar: The Verdict

When you’re choosing between a Jazzmaster and a Jaguar, it really comes down to your style of play. Both are great guitars for rock, though the cutting tone of the Jaguar does tend to make it a more popular choice for lead guitarists and harder styles.

On the other hand, the Jazzmaster’s balanced tone and smooth action make it a more versatile guitar. Whichever way you go, you can find modern updates of these classic designs to fit every budget, making them more accessible than they were in the ’60s and a great choice for modern guitarists of any genre. Good luck!