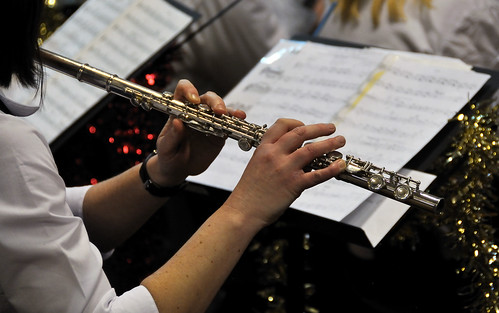 Photo by Toby / CC BY

Scales and etudes are a great way to develop your flute technique, but let’s face it: they’re not the most exciting thing to play.

Sprinkling a few familiar melodies into your practice sessions can provide a nice break from the tedium of exercises. Not sure where to start? Here are some easy flute songs for beginners to try.

Do I Have to Play Flute Music?

Nope! Flute is in the key of C, also known as “concert pitch.” This means no need for transposition if you’re playing melodies written for other concert pitch instruments like piano, violin, oboe, and guitar.

The range of the flute is from B3 to F7. Few instruments can play higher than a flute, so you shouldn’t run into much music that exceeds your range in that direction. Sheet music written for strings or piano may go below B3 (the B below the treble clef staff), in which case you’ll need to practice transposing up an octave or put the piece in another key. If those sound like things beyond your skill-set, you can avoid the matter entirely by sticking to songs that stay in the flute’s range.

What If I Don’t Read Music?

There are two ways to learn melodies without reading sheet music:

Many jazz and rock musicians prefer to learn songs by ear, and this is the fastest way to learn songs if you want to play them from memory. It can be a difficult and time-consuming process when you’re first starting out, though, and might not be the best option for a complete flute beginner.

To be honest, learning to read music isn’t hard—it’s definitely easier than learning to play the flute. It’s also a skill you’ll need if you want to play with other people in a concert band or woodwind quartet, and will make it easier to play with others even in more informal settings like church bands or jam sessions.

A good way to start learning to read music is to find sheet music that has the letters written over the notes. You can play the songs using the note names first, then slowly transition into playing while reading the staff. This will help you give context to the symbols used in musical notation.

This is one of the first songs played by learners across instruments, with a simple melody that uses only 6 notes, all of which are right in the heart of the beginning flautist’s range.

Quick and accurate articulation is one common challenge for beginning flute players. A song that uses repeated notes like “Itsy Bitsy Spider” is an excellent way to work on this skill.

HOW TO PLAY the Recorder: Itsy Bitsy Spider

This is another great one for working on crisp articulation. It also ups the rhythmic complexity a bit, and can be a fun song to work on speeding up your finger movement. Start by learning it relatively slow and see how high you can click the metronome speed without either your tongue or your fingers missing their mark.

A lullaby is supposed to be played slow—good news for a beginning player. “Rock-A-Bye, Baby” has a slightly expanded range compared to “Twinkle, Twinkle Little Star,” with larger intervals to navigate in places. This can make it a great piece to practice once you’re comfortable with most of the fingerings and working at smoothing out your transitions between notes.

“My Heart Will Go On”

The theme song from Titanic is certainly one of the best-known examples of flute in popular music. While the opening melody is played by a tin whistle on the recording, a flute is just as suited to it. Celine Dion’s vocals also align nicely with the flute’s range when it’s time to play the main melody.

Titanic: My Heart Will Go On - Recorder Flute Tutorial

“Somewhere Over the Rainbow”

The beautiful, soaring tone of the flute is one of the main strengths of the instrument, and this song from The Wizard of Oz sounds delightful when played on the flute. It’s also a good choice from a learning standpoint, covering a relatively wide range with large interval jumps and lots of long, held notes that will help you work on your intonation and breath control.

Somewhere Over The Rainbow - Recorder Tutorial With Notes

“The Girl from Ipanema”

This bossa nova standard by Antonio Carlos Jobim has a smooth, easily-playable melody and relatively straightforward chord changes for those who want to try their hand at improvisation. The rhythm is a bit more complex than in the songs above, making it a great way to practice reading and playing syncopations and other rhythmic patterns common to pop and jazz music.

Play "The Girl from Ipanema" arranged for flute and piano

Colloquially known as Pachelbel’s Canon, this iconic classical work was composed for strings but has since been adapted for a wide range of instrument combinations. It starts off slow and steady, working into more complicated technique as it goes along, which makes it one of the main reasons it’s a good first classical piece for beginners.

The best easy flute songs for beginners are the ones you want to play. Flute is most commonly associated with classical music but that doesn’t mean that’s all it can play—just ask Lizzo, or Jethro Tull’s Ian Anderson. The songs listed here are a great place to start, but there’s tons of sheet music out there to explore, and you don’t have to limit yourself to things written with flute in mind. Good luck!