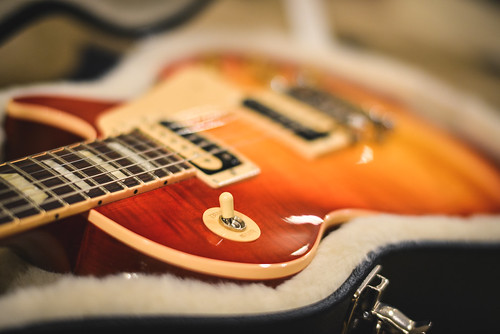 Photo by Alejandro C / CC BY

Les Paul guitars are considered as the finest in the world and for a good reason too. Each and every model from the numerous Les Paul series sounds amazing, offers tremendous durability, comes packed with the finest tonewoods, but, most importantly, these guitars feel great to play.

Today, we’ll touch on a topic that is slightly less popular than, for instance, sound of Les Paul guitars or their sturdiness. Namely, we’ll talk about Les Paul neck profiles and how these features affect the overall playability of these marvelous guitars. The majority of Gibson Les Paul guitars feature one of the following neck profiles:

Some of the first Gibson guitars were equipped with a massive U-shaped neck, which appears as huge in comparison to today’s models.

The so-called ‘Baseball Bat’ neck was heavy and a common cause of hand fatigue not just because of its weight but also due to the fact that the hands of the player would have very little space to rest.

However, Gibson quickly noticed this and the U-shape neck was fairly quickly replaced with the vintage D-Shape (rounded) neck profile. The only benefit of the U-shaped neck profile is increased structural integrity, as these necks were able to join the body in a more organic way.

Obviously, guitars with baseball bat necks have numerous shortcomings, and they ended up becoming less durable by the long term simply due to their increased overall weight.

In comparison to the U-shaped neck profile, the rounded D-shape was an incredible upgrade. This type of neck profile emerged from the same era (during the 50s), and we can safely say that it came to be solely as a response to the unwieldiness of the U-shape.

The sides of this neck profile are slightly trimmed down while the fret surfaces remained the same. Further on this point: the first fret of guitars equipped with this kind of neck were 0.50-inch shorter.

Rounded D-shaped necks were slightly (but sufficiently) lighter, and many Les Paul players would argue that this is the best ‘vintage’ Gibson neck profile.

Despite the fact that the differences between U and D shapes were miniature, the latter seemed to have appealed to players so much that even the future improvements were almost neglected in favor of the Rounded D Shape.

Asymmetrical variations of Gibson Les Paul neck shapes are a thing of modern technology. These profiles were invented only a couple of decades ago when Gibson decided to improve the traditional design with more ergonomic construction while keeping the same idea intact.

The Asymmetrical Rounded D shape is only different from the traditional Rounded D as far as the upper side of the neck is concerned. Its left side is sanded and trimmed so as to provide an easier, more comfortable grip while the midsection and the lower side are identical to the original.

The idea here was probably to provide players with a bit more flexibility in terms of the lower frets, allowing solo guitarists to play rhythm without tiring as much. However, these differences are so minor that they’re almost impossible to spot with a naked eye, even though the boost in playability is undeniable.

V-shaped necks are fairly uncommon when it comes to Gibson Les Paul guitars. In fact, only a handful of Specials and custom models may have been supplied with it.

The Soft-V is a thinner, smaller, and lighter version of the Rounded D-Shape, sporting the same fret surface with sides that are even further trimmed down for the sake of improved playability.

However, all V-shape variations were too different from traditional Les Paul neck profiles, which is possibly the reason why this design didn’t stick around for long.

The Slim Taper profile is drastically different from typical Les Paul neck designs, but simply due to the fact that it offers an exceptional level of playability the traditions were briefly and mildly abandoned for the sake of performance.

Gibson Les Paul necks of this sort were considerably smaller and lighter, and the main reason why they’re considered as the ultimate Les Paul neck profile is the fact that they’re unequivocally superior in terms of ergonomics.

Similar to the story of the Rounded Asymmetrical D-shape, the Asymmetrical Slim Taper neck profile was designed with enhanced flexibility and versatility in mind. This time around, though, the neck drifts away into asymmetry from the opposite end – from the twelfth fret onwards instead of first fret downwards.

This type of Les Paul neck profile allowed rhythm players to more reliably reach higher notes whenever harmony parts needed to be played, but it also afforded solo guitar players the ability to pull off certain techniques with more accuracy.

The extra-large variation of the Rounded D-shape saw numerous iterations across the decades, but it was first brought to the world during the 50s.

Basically, this neck profile style resembles the original U-shape (Baseball Bat) more than the D-shape, as it’s big, chunky, and fairly hard to grip if you have smaller hands.

Rounded XL D-shape was meant to provide Les Paul players with a better-sounding sustain, although this particular design wasn’t as forgiving in terms of chord play and soloing. Nevertheless, it’s still considered a classic among the Gibson neck profile styles.

The most flexible and versatile neck profile that could still pass as a ‘traditional classic’ is the C-shape. In essence, it’s slightly deeper than the Rounded D while still being significantly shallower in comparison to the U shape.

One of the reasons why this design is a favorite among players is the fact that it doesn’t have any noticeable drawbacks.

Its sides are completely symmetrical, and its all-around design allowed players to press on any fret with equal ease. Most Standards and 50s Les Paul models were equipped with this type of necks, although we can also see them in more modern models, most notably in signature guitars.