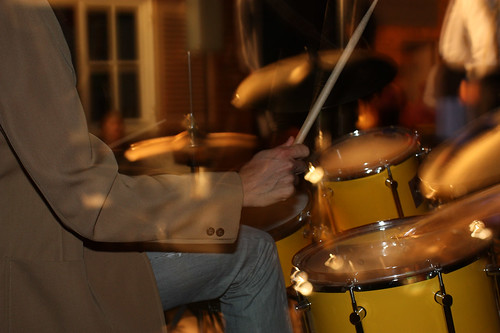 Photo by Christopher Schirner / CC BY

never really went out of fashion since it directly affected genres such as soul, R’n’B, hip-hop, and many others, in recent years interest in funk and related genres has spiked thanks to the likes of Vulfpeck, Snarky Puppy, Hiatus Kayote, and many others.

Marking the 70s and changing the course of music history, funk is guaranteed to spice up and add a special flavor to any band’s setlist. No matter what instrument you play, classic funk songs are always interesting and fun to play.

If you are a beginner, fret not, since funk won’t require you to practice scales for hours on end to shred like Yngwie. Instead, funk usually relies on layering different rhythms of guitar, bass, and drums to create a “pocket” groove.

Unlike some other genres, funk is not played to display incredible technical skills, although they are welcome. On the contrary, it tries to get people to dance and sing along with the help of muted guitar strumming, groovy bass lines, and warm melodies, and some steady drumming.

Although we’d need a book or two to mention most of the funk classics that you should add to your vocabulary if you want to groove, this list will try to get a general overview of some of the most popular and easy funk songs that you can start with.

1. Shotgun – Junior Walker and the All-Stars

We are going to start off this list the right way-with an absolute funktastic funk classic that is guaranteed to get your audience up and start dancing. Though you may not know this song unless you’re a funk aficionado, Shotgun is what funk guitar is all about so you’d do well to add this one to your repertoire.

Although it does feature some bluesy fills here and there, the biggest part of the song is just chord 16th note strums that are rather easy to grasp. Grab your guitar and start grooving.

Fast forward to 2013. This Grammy-winning tune was an absolute banger wherever it was played for several years and remains to be a treasured funk-pop classic by listeners around the world.

Though Daft Punk delivers disco and dance tracks most of the time, this particular time, they teamed up with the famous Pharell Williams and the result was amazing.

Featuring only four chords and a simple strumming pattern, Get Lucky is a staple funk song that is going to make you a guitar hero of the party and get your friends singing along in no time.

One of the songs that should have been sent to deep space on a Voyager mission is the world-renowned hit song Stayin Alive. Although it leans a bit on the disco-dance side, this funk song is a staple of any band looking to give their audience a good time on a weekend night.

Though it may be challenging to put together for beginner players, the song is absolutely worth the few hours of investment into getting the sounds right. Taken apart, the different sections of the songs are actually relatively easy to play. Featuring a lead guitar groove, a few strumming patterns, and different chord shapes, this song is guaranteed to get your funk to the next level.

Another iconic tune to get people moving is 1970s Play That Funky Music. If you’re into funk, this song is a must-know for anyone looking to get their groove on. Upon release, the single quickly conquered the world achieving platinum status thanks to its funky-dance groove and guitar fills.

The iconic lead guitar groove is relatively easy to play, and all of the chords are played with a simple downstroke or upstroke so you shouldn’t have a hard time getting this one right.

The famous RnB Chic band released this tune back in 1979, ensuring the next generation gets hooked on funk too. And hooked they got since Good Times is one of the most sampled songs in various hip hop hits.

The song itself is a standard funk tune featuring lots of major and minor 7th chords which you really should learn how to play if you want to play funk music. Other than that, the song features lots of 16th note strumming with lots of mutes so it may take some time to get it perfect but it will be worth your time.

A mish-mash of pop, disco, soul, and even EDM, Up-Town Funk is deeply rooted in a funk sound thanks to its groovy rhythm. Another banger from a more modern era, Up-Town Funk is a song that everyone loves to dance and swing to making it a great addition to your live sets.

The main riff is pretty straightforward, with just a few notes played on two strings, so it shouldn’t be giving you too much of a hard time to learn. The chords are also pretty standard funk-soul chords, most major and minor 7ths played in 16th notes.

The godfather and soul and high priest of funk James Brown is probably the first person most of us think of when someone says funk. Picking a song from a 50-year long career from such a central figure in the world of music is difficult but I Got You I Feel Good is a great song to start with since it is fantastic and it’s characteristic of James Brown.

As with most funk music, getting this song right is all about the rhythm, so be sure to listen for the accents of the beat as they are what makes the song what it is. Other than that, it’s a pretty simple tune to play since it features one main riff that repeats, a few chords, and iconic slides that define the song.

As we’ve stated before, funk is not a technically demanding genre, but instead focuses on the players’ ability to instinctively understand rhythm and groove so listening to other players is crucial in creating the unique funk sound when you play.

As with anything else, practice makes perfect so plug in, start strumming and you’ll be playing that funky music in no time.