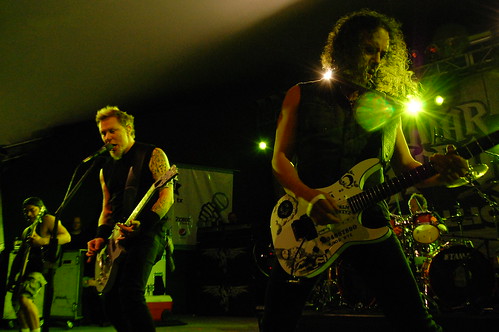 Photo by Whittlz / CC BY

put the hours in, got the hang of a few different scales and chord shapes and you can play a few songs on your own without too much hassle? Well then, I think you’re ready for the next step my friend, and that is guitar duets.

Playing the guitar sure is fun no matter what level you are at, but just like anything else, it can get a bit stale and monotonous if you don’t implement any changes in your practice for a long time. If you’ve invested the hours into being a bedroom guitar hero and feel like you’ve had enough of it, the next thing you should do is invite a guitar buddy or two over and jam over some evergreen tunes.

Playing dual guitar songs is a great way to spice up a social event and get everybody in the group to sing along to your favorite songs, but it’s also a great stepping stone towards playing in an actual band in front of a live audience. Guitar duets are a no bigger challenge than playing the same songs alone, but there are a couple of things to keep in mind.

First and foremost, remember to tune both guitars accordingly. There is nothing worse than hearing two guitars playing a song everybody knows and loves out of tune. Another thing to keep in mind is tempo. Be sure to stay in sync with your guitar partner as you jam away unless you want your jam to fall apart and dissipate into awkward silence.

Now that we’ve got that covered, let’s get started with some easy songs to play with our friends.

The number one evergreen song that everyone knows was a great commercial and critical success at its time, which continues enchanting its listeners’ ears many decades later. Although the original studio version actually features eight layers of guitar, it sounds perfectly good with just two as well.

If you are a beginner, replicating the magic of Joe Welsh and Don Felder dueling on their guitars might be a tad bit out of your league but don’t worry, because the live version of the song sound equally good but is much easier to play. On the other hand, if you’re not the type of person who likes to do solos, you could delegate those responsibilities to your guitar buddy and focus on the rhythm instead.

Another classical guitar anthem, A Horse With No Name continues to grace the radio waves with its presence many, many years after it was originally released simply because it is such an awesome song. Great for any mood or setting, A Horse With No Name is guaranteed to get your friends to sing along once you get to that chorus.

Though the song itself sounds perfectly good with one guitar, it is very easy to arrange for two guitars, as the band itself has two guitar players. Since it has only a few chord changes, this makes it perfectly good for practicing different shapes of the same chords enabling you to achieve a richer and fuller sound with two guitars.

How To Play America - Horse With No Name

3. Nothing Else Matters – Metallica

Straying a little bit from rock into metal waters, this classic ballad features beautiful harmonies and wonderful melodies that are very fun to play with dual guitars and is guaranteed to get people to sway to the slow rhythm of the guitars.

Although it is a simple song, it would take a seasoned musician to make it sound good on a single guitar. With some backup though, it’s almost a cakewalk. Since it has three different repeating parts, the song structure is easy to learn and is a great song to practice both soloing and solo accompaniment.

4. While My Guitar Gently Weeps – The Beatles

The classic melancholic hit track from the critically acclaimed 1969 double album “The Beatles,” also known as the “White Album,” was written by George Harrison as an “exercise in randomness.” Beatles musicologists have praised the song’s structure and harmony over the years, noting how the verse features a hybrid of Dorian and Aeolian modes.

The truth is that the song has two different chord changes and a few different chords that are easy to play. Getting the song to sound right is not a big challenge even if you are a beginner, and what makes it even more fun for two guitars are the short but expressive guitar licks played over every second line.

The Beatles "While My Guitar Gently Weeps" - Rhythm Guitar Lesson

Going into a more modern era of music, this 2016 upbeat song by Justin Timberlake features elements of disco-pop, and soul, and even has some funk thrown in there for a good measure, making it a really fun song to jam to with your friends.

This instant crowd hit is really easy to arrange for a guitar duet as it only has three chords: C, Am, and F. This lets you and your friend experiment a lot with the chord shapes and allows you to achieve an amazing sonic range, as you could cover both ends of the fretboard with different chord shapes.

As you probably know by now, some of the songs from this list were originally not written as guitar duets, which is why they are a great example of the fact that almost any popular song can be arranged for two guitars if you know what you are doing. While playing in a duet will require both you and your friend to develop balance and coordination, most of these songs will sound great on your first attempt.

If it is your first time trying to play with someone else, you might want to stick to rhythm guitar for the time being. Later on, as you get more and more comfortable with different techniques of playing and different parts of the fretboard, you might want to start exchanging solos with your friends next to a campfire with a group of friends singing along to some great tunes.