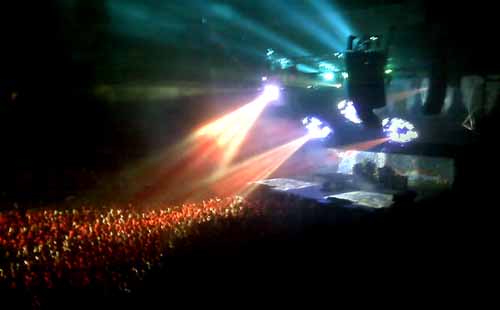 Photo by Heather Hopkins / CC BY

one of the bands that the word “easy” doesn’t quite fit next to, regardless of context. This musical group rose to worldwide fame through remarkably unique riffs, exceptional musicianship, and tremendous sonic organic chemistry between each member.

Despite the fact that odd time signatures are almost a default for Tool tracks, there are a few songs in their catalog that can be classified as “easier” in terms of guitar work. Today we’ll talk about classics, deep cuts, and popular Tool songs that are approachable for guitar players. So let’s start with:

Easily one of the most popular tracks in the entire Tool catalog, Vicarious is a classic from the album 10,000 Days released in 2006. While complex drumming in this song may give you an impression that the song is ridiculously hard, the guitar riffs are playing in unison with both bass and vocals. After realizing this, you’ll see the song becomes more intuitive and substantially easier to cover.

There are a couple of guitar fills that may prove to be a bit of a challenge, but the verses and choruses are decently easy, at least in comparison to most of the other Tool songs.

Fortunately, Vicarious features quite a bit of repetition, flattening the learning curve drastically. On the downside, it’s a 7-minute track that will test your endurance and memory.

In comparison to typical, more traditional rock titles, Vicarious may be fairly long, but in comparison to Tool’s catalog, it’s actually quite short (compared to tracks that last over 10 minutes, such as Pushit, Fear Inoculum, Pneuma, and such).

The iconic bass intro of Schism has become an introduction to approachable odd time signatures for thousands of up-and-coming rock and metal musicians. What makes this one Tool’s easier songs is its popularity and how frequently it’s circling the radio waves . Nearly all rock fans have at least heard it once.

Familiarity with the riffs plays a pretty important role for musicians who want to learn how to play this song, as it’s essentially dominated by the opening riff. Towards the middle of the song, a lengthy bridge takes over, although it’s much simpler than the lick in the verse.

There are a few fills that move away from the main riffs, although they aren’t too complex either. Schism is not an easy song by any definition, mainly due to its peculiar time signature, but fortunately, learning the main riff is almost enough to learn the good three fourths of the song.

The title track of Tool’s third studio record is a tad shy of being ten minutes long, which may intimidate a lot of guitarists who aren’t accustomed to playing that long without pausing. Fortunately, Lateralus isn’t guitar-heavy. In most Tool songs, the bass is actually leading while guitars are adding intricate, beautiful details. Lateralus isn’t an exception.

This song features multiple sections where drums are the only instrument playing. Bass slowly creeps in these sections, and finally guitars are only heard on the last couple of bars.

As a moderately-paced song, Lateralus is one of Tool’s groovier songs. The emphasis is on feel rather than shredding. Again, the drums and bass are very present while guitars are essentially providing backup.

There’s a neat solo roughly in the middle of the song, but it’s both simple and fairly short. After the solo, there’s a brief pause, after which drums and bass slowly take over. The second solo kicks off at the seventh minute, and it’s essentially simple if you have the right pedals and effects.

Although there’s an abundance of small details to pay attention to in Lateralus, the core of this song is plain and straightforward.

Another track from the Lateralus record, Disposition is much shorter, slower, and simpler than the majority of the songs on the album. It may be the easiest Tool song when it comes to guitar playing, although the myriad of small details implies that some guitar players may need more time to perfect it note for note.

Another reason why Disposition is among the easier Tool songs is because it doesn’t present too many surprises. There are no tempo or time signature changes, and the overall atmosphere of the song persists from start to finish.

In terms of riff complexity, all licks are straightforward and largely comprised of single notes. Again, there are a few fills that complement the melody. Although they’re simple, they don’t repeat as much as the main riff.

This is a perfect song for Tool fans who want to learn a couple of songs from their catalog without investing weeks to nail the first few minutes of any given track.

Ænema reveals the band’s punk-ish influences, which is reflected in the song’s up-beat tempo and the heavy, angst-fueled choruses. Despite being a bit faster than an average Tool song, Ænema does not feature a lot of guitar riffs. Roughly at the middle of the song, the guitar is taking the backseat, giving way to drums and vocals.

The riffs in this song are straightforward, although not as repetitive as usual. There are a couple of key changes, although there are more pauses and empty guitar bars than average as well. For an “angry” song, Ænema is actually pretty relaxing to play. It hides quite a few surprises in terms of bridges and fills, although not nearly as Pneuma or Fear Inoculum.

Another massive success for the band, Tool’s Sober is among the top three most popular songs the band ever released. The simplicity of its riffs, its heavy, moderate tempo, and the outstanding tone that the band had already established up to this point are all to “blame” for Sober being an extraordinary hit.

In terms of complexity of the song structure and riffs on guitar, Sober doesn’t feature too much guitar to begin with. The verses are essentially fills while in chorus sections the guitars play very straightforward licks. Finally, it lasts only 5 minutes, and the riffs repeat quite frequently.