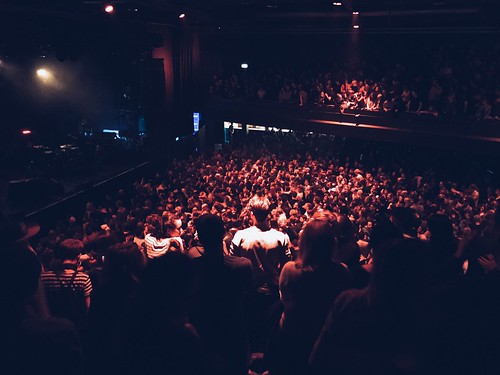 Photo by Christoph Meyer / CC BY

started out as a hybrid genre of various musical elements, which was usually a result of crossovers between metal and other genres. The majority of early nu metal bands were focused on establishing a sound rather than showcase technical proficiency, so quite a few tracks, and even albums of this genre are fairly easy to cover on a guitar.

We’ve created a shortlist of some of the most popular, best received nu metal songs of all time that feature easy guitar licks, so let’s start from the top:

Did My Time is a song that was on heavy rotation on MTV during the 90s, as well as a track that features Angelina Jolie starring in the official video, so it’s quite easy to see why it’s deserving of the prime spot.

All members of Korn are tremendously talented musicians, although they were never laser-focused on showing it off. Did My Time relies on simple beats and licks, providing plenty of space for Jonathan’s remarkable vocals to express the heaviness of the track.

The main riff of Did My Time repeats on multiple occasions, and the only sharp turn from the song’s structure is the iconic breakdown after the second chorus. There are no solos or tempo changes in the track. It’s a fairly simple song for all instruments, especially guitar that exemplifies the proverb “less is more.”

Korn - Did My Time (Official Video)

2. Slipknot – Before I Forget

What Metallica did for thrash metal, Slipknot did for nu metal. This band not only popularized the genre, but it also helped establish a permanent slot in its brutal cylinder. Before I Forget is one of their most iconic tracks, right next to Snuff, Psychosocial, and Wait & Bleed.

The main reason why Before I Forget made the list is because it’s as simple as Psychosocial, as melodic as Snuff, as brutal as Wait & Bleed, and pretty much screams Slipknot in all directions. There are several simple but notable challenges for beginner guitarists in this song that make it even more rewarding once mastered—several “squeals,” heavy palm-muting, octaves, and more.

At the end of the day, Before I Forget is among the simpler tracks in Slipknot’s set, and it still remains a staple in their history.

Disturbed is now seven albums deep into their career, and many attribute the massive success of the band to Down With The Sickness and Stricken. While the former is their most popular song of all time, Stricken is a favorite of die-hard fans and musicians who’ve been fans since the group started out.

This track kicks off on all pistons, using a classic, heavy and melodic lick as an opener before heading into a groovy chorus. In terms of song structure, Stricken follows the beaten path with the standard verse-chorus-verse-chorus pattern before heading off to a slick solo.

Every section of this track is, though somewhat predictable, exceptionally memorable, as Disturbed made sure to add colorful details to each riff. Overall, it’s a straightforward nu metal track that took the best from the world of heavy metal before spicing it with unique vocals, tones, lyrics, and classic melodies.

Dig helped Mudvayne reach hundreds of thousands of fans with exquisite imagery, remarkably creative use of percussions, and one of the slickest bass lines in metal as a whole. As grand as it is, it’s still very approachable for beginner guitarists, as there aren’t that many trickshots to be tackled, no odd time signatures, solos, or peculiar key changes.

Another reason Dig is counted among the simpler nu metal songs is that there’s actually just one guitar riff in several variations. There wouldn’t be any significant differences between the verses and the chorus were it not for the different accents on the bass guitar and drums. However, this is also what makes this track so catchy and memorable.

Limp Bizkit is among the handful of brands that have managed to blend hip-hop influences with heavy metal and rock sensibilities successfully. By default, these two music cultures aren’t meant to mix, but Rollin’ explains at length why exceptions are possible.

Rollin’s main riff is arguably the single most memorable moment in nu metal history. The guitar work in the track’s chorus is almost as impactful as Fred Durst’s singing. One of the many reasons why this song has over 200 million hits is that it’s largely comprised of this exact guitar lick.

Essentially, even the most immediate beginner guitar players will be able to easily learn this song in and out. Its structure and sonic evolution are straightforward, and to a large extent, predictable. Nevertheless, it’s a classic nu metal song that is relevant and relatable even more than two decades after its release.

System of a Down is a band that had numerous labels attached to its name, but the fact that they were at the forefront of the first nu metal waves is irrefutable. While bands like Linkin Park, Limp Bizkit and RATM were combining metal with hip-hop, SOAD combined heavy metal with opera-esque singing styles and “spoken word” narrations.

Stylistically, System’s songwriting is absolutely unique, as can be heard in Bring Your Own Bombs (BYOB) – an upbeat, melodic, satiric track that helped the band connect with fans of more extreme music, as well as with party maniacs that are classic rockers and thrash metalheads.

While the chorus of BYOB is extraordinarily simple, the verses are quite fast, but they’re still easy to tackle with enough practice. Lonely Day, Toxicity, Aerials, and other hit singles of System of a Down are generally considered as much simpler. However, BYOB is a bit more “metal,” and hence more deserving of the spot on this list.

Imagery is of incredible importance for nu metal bands, and Mushroomhead took it to places where a few have managed to before them. Although masked musicians and singers with exquisite makeup are fairly common nowadays (from Alice Cooper and Kiss back then, to Ghost today), this phenomenon wasn’t as typical in the early days of nu metal.

The spooky keyboards dominate Solitaire Unraveling, paving the way to the brutally heavy chorus. The main guitar riffs in this track are widely regarded as some of nu metal’s finest. Between the choruses and keyboard leads, Solitaire Unraveling is essentially a singular stretched breakdown. It’s as heavy as it is simple, which is arguably the reason why it’s a fan favorite.