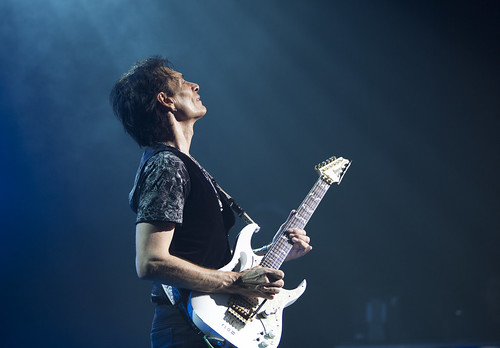 Photo by Alterna2 / CC BY

Vai certainly needs no in depth introduction, it is important to note that he is a key figure in the global music community and one who changed the course of rock history and what it means to be a guitar player for good. So when we say easy Steve Vai songs, we definitely don’t mean the same type of easy as Nirvana songs.

However, if you’re reading this article, that probably means you aspire to be a technically proficient and musically well-educated guitar shredder. Though playing on par with a musician like Steve might look impossible for a beginner, that doesn’t mean that you should give up and sell your guitar. On the contrary, you should make a plan and start practicing.

This being said, it is important to note that every type of music has better and worse entry points and the idea behind this article is to give you a few ideas on where you start if you want to start climbing the mountain that is Steve Vai. You probably won’t impress anybody the first time you try to play any of these songs, as they will require you to put in some hours, but remember that music is a journey and the more you practice, the farther you will go. So without further adieu, here are a few songs that you might want to try practicing if you’re a Vai fan.

Compared to many other songs from Steve Vai’s vast discography, Die to Live is a relatively simple song with a three-member band setup that leaves plenty of space for you to jam along before you get into some serious practice. What separated this song from the others on “Alien Love Secrets” is the thick and creamy guitar tone and how well the lead and rhythm blend together to create amazing melodies.

The entire middle section of the song is chock-full of incredibly tasty licks that you could and should start practicing. What makes many of these licks interesting though is the way they are rhythmically organized. Instead of long 8th or 16th note runs, many of the licks are focused on triplets which might make them easier for some players to section off and practice in individual parts before combining them together.

Though many beginners make the mistake of trying to practice these licks as if they were written in Eb Major scale, they are in fact written in Ab Lydian mode, which is the fourth mode of Eb Major, as you may already know. So be sure to give that Ab Lydian a few runs up and down to warm up before you start dealing with this song.

While Blowfish is certainly not in the top 20 of the most popular Steve Vai songs, it definitely is in the top 5 Steve Vai songs you can try unless you’re an aged guitar veteran with many years of practice under their belt.

Coming from Steve’s fourth studio album that came out in 1996, Blowfish sounds oddly similar to Led Zepellin’s Black Dog. In other words, if you ever played Black Dog before, you should have a much easier time getting this one under your fingers.

What gets most players thrown off when they try to play this song is the harmonizer effect in the lead section of the song, which adds a layer of 5ths across the solo, making it hard for many players to focus on what’s really going on there.

What’s really going on is a lot of blues and pentatonic scales. And I mean, a whole lot. If you are a guitar player, chances are that you already know the blues scale, so here is a chance to practice using it in a progressive rock context.

Another thing you might want to pay attention to are the frequent jumps between lead and rhythm parts which may require some practice before you can get a good hang of. As with anything else, practice makes perfection, so pick up that guitar and start rocking away.

Coming from the incredible 1990 album “Passion and Warfare,” Balerina is a short, fluffy piece that serves as a resting place in an album that Steve Vai himself described as, “Jimi Hendrix meets Jesus Christ at a party that Ben Hur threw for Mel Blanc,” so we could say it’s one of the less provocative and easier pieces of music to learn coming from this absolute beast of an album.

Balerina features beautiful harmonies stretched out across several layered guitars so it might sound more difficult to pull off than it actually is, but it’s actually a great song that can help you learn some interesting chords shapes which will definitely enrich your musical vocabulary.

That being said, one thing that definitely is tricky about the song is the sound effects it is using. While there are many ways to get a similar sound without investing too much money, if you want to go for Steve’s original sound, you probably will have to spend a few extra bucks on a good processor or pedal board.

To sum up this article, reaching for something that is above your technical level is never going to be a cakewalk, but there are easier and harder ways to go about it. While most players prefer to spend years practicing the basics before attempting to play songs that made them pick up their guitars in the first place I would advise you to try and keep on trying until you succeed.

While Steve Vai’s songs are a tremendous undertaking, especially for inexperienced musicians, the mere action of practicing and learning from his songs will make not only your playing but also your understanding of music itself so much deeper and better.

Though you might get frustrated at times, playing pieces from a musical giant such as Steve Vai is definitely a rewarding experience, and you surely won’t regret the time invested when people look at you in disbelief as you shred your way across the fretboard.