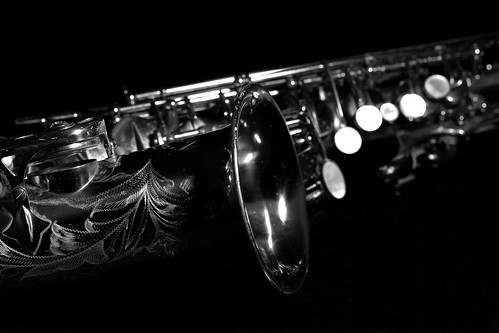 think of upbeat genres like funk and be-bop when they think about alto sax. While the alto’s bright sound often lends itself to these types of works, it’s not limited to the happy end of the emotional spectrum.

Like the violin, alto sax has a similar harmonic richness to the human voice. It’s also capable of producing micro-tones, slides, and other vocal affects that give it tons of emotive potential.

Whether you’re putting together a sad song playlist or a saxophonist seeking tearjerkers for your next performance, here are some songs to get you started.

Ornette Coleman is one of the pioneers of avant-garde saxophone, a reputation he cemented with his third album, The Shape of Jazz to Come, in 1959. “Lonely Woman” is the first track on the album, and the only Ornette composition to become a jazz standard in the years since.

It’s hard to find a more emotive sound than the wailing melody that opens the head. Even when the melody switches to a more familiar blues sound on the bridge, it retains a plaintive feel—just a small break in the clouds, not a full blue sky.

The free nature and relatively relaxed tempo of “Lonely Woman” also make it a good choice for beginning improvisers. The chords aren’t overly complex—most people solo over a loose D minor tonality, and even if you include the bridge in your solos the changes are fairly slow and simple. The melody itself isn’t too difficult, either, with no fast fingerings to contend with and a mostly smooth, stepwise note-to-note progression.

No, Cannonball Adderley didn’t write “Autumn Leaves”—that honor belongs to Joseph Kosma and Jacques Prévert, who originally wrote the tune in French as Les Feuilles mortes for the film Les Portes de la nuit in 1946. Like most jazz standards, though, it’s been recorded countless times, and one of the most iconic versions is from the 1963 album Cannonball recorded live in Tokyo.

The lyrics of “Autumn Leaves” certainly have a melancholy feel, one that’s reflected in the melody and predominantly minor tonality. Cannonball’s version of the tune emphasizes its undertones of nostalgia, starting from the bass ostinato that opens and closes the work.

“Autumn Leaves” is often one of the first standards budding improvisers learn when they’re ready to move beyond the basic blues changes. It mostly follows standard ii-V-I movement (with a few tritone substitutions to spice things up). The basic melody is simple enough for many beginners. More advanced players can transcribe Cannonball’s head in if they want to add a bit of complexity.

Paul Desmond’s dry, bright alto tone is most associated with typically upbeat Dave Brubeck tunes like “Take Five” and “Blue Rondo Alla Turk.” The 1996 compilation album Feeling Blue brings together some of his more somber tunes, and is a great album to check out if you’re looking for sad alto sax songs in general.

Desmond first recorded “Here’s That Rainy Day” on his 1965 album Easy Living. Like many jazz standards, it was originally written for a musical but quickly took on new life off of Broadway. The large jazz band arrangement of the tune often features an alto sax solo, as well, something you can hear in versions featuring singers like Nat King Cole.

The chord changes of “Here’s That Rainy Day” are more on the major end of tonality than most of the tunes on this list, but any song that starts with the line “Maybe I should have saved those leftover dreams” qualifies for the label “sad song” in our estimation. From a player standpoint, the head and changes are easy to learn for anyone with a baseline knowledge of improvisation, and like “Autumn Leaves” it’s a good tune for branching out beyond the blues and rhythm changes.

Most people associate “Almost Blue” with trumpeter Chet Baker, who covered the song in 1987. In reality, the song was written by Elvis Costello, who was inspired to compose the tune by Chet Baker’s version of “The Thrill Is Gone” from Chet Baker Sings.

The original version of “Almost Blue” from Imperial Bedrooms was only voice and piano. The song has risen nearly to jazz standard status since and has been performed and recorded by artists across instruments and genres. Costello’s touring band has featured sax solos on the work, so we feel confident including it on this list.

The melody of “Almost Blue” fits nicely in the most emotive range of the alto. Like many ballads, it looks more complicated on the page than it sounds, making it a good candidate for learning by transcription. Another common trait of ballads is relatively fast, complex chord movement, and “Almost Blue” is no exception here, either. This can make it a more advanced tune to solo over, though the slower tempo at least gives you more time to react to the changes than in faster tunes.

The history of this 19th century spiritual imbues it with sorrow from the start. It dates from the slavery era in America, giving multiple meanings to the longing in its lyrics. The most iconic performance is by blues singer Odetta Holmes, who performed it at Carnegie Hall in 1960 and included it on her album Odetta at Carnegie Hall. There are plenty of recordings out there, though, ranging from jazz masters like Wynton Marsalis to popular musicians like Eric Clapton and John Legend.

Like most spirituals, “Motherless Child” has an easily singable melody, giving it a straightforward, mostly stepwise motion for saxophone players. The changes are similarly easy to navigate, especially since it’s typical to play the tune at a slower tempo.

Non-improvisers can still play this tune, as well. It’s been arranged for a plethora of instrument combinations over the years, including classical saxophone quartet. Because of this plethora of arrangements, you can find a version to suit almost any skill level.

The 5 songs on this list are all great places to start when you’re looking for sad songs played on alto, but they’re certainly not the only options out there—and as you can see, you don’t need to stick to ballads when you feel like being melancholy. If we missed one of your favorites, let us know in the comments! Good luck!