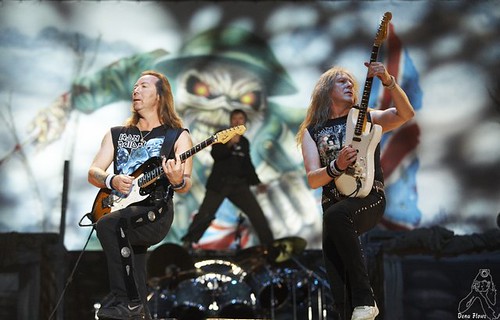 Photo by Dena Flows / CC BY

followed Iron Maiden’s steps to enter the brave new world of guitar and heavy metal music. As a band, Iron Maiden has discovered that “something,” a spice of life you can hear in their every song. This spice of life is, I believe, instilled in their riffs.

Whenever played, that little something starts coursing through veins of fingers, hands, and arms, to and from the heart, the gut. Here’s a list of songs for guitar beginners to ensure they stay forever young, wild, and wicked.

Run to the Hills

The sweet sweep that opens the song is as famous as the band itself. It’s full of bends and vibratos that can be easily practiced, and it closes with a riff.

The verse part is the classical Iron Maiden alternate shredding riff. It’s as good as any to begin getting into the craft. Practicing it very slowly until you hit the strings the right way. This can take a little while, but whenever you get bored you can start playing it fast and see how it sounds.

The solo sounds fast and difficult, and it is hard for beginners. However, you can start practicing it phrase by phrase and start brushing it up from there. Though it’s played with a lot of hammers and pulls, you can take the time to practice alternate and sweep picking in the beginning, gradually speeding up and excluding surplus picks along the way.

One of the songs that are played with heart and attention. It’s best played on an electric guitar, but it’s not a big deal if you have to practice it on an acoustic guitar either. It’s full of alternate picking to get a hold on pick control over multiple strings.

The tabs are easy to follow throughout the song, and the rhythm comes intuitively, which leaves the several solo parts as a bit of a challenge late in practice.

The solo after the second chorus quickly accelerates and can be intimidating. To be honest, it’s not easy to pull it off even for intermediate players, and I mean the right bends and vibratos and picking at the same time, it can be too much. Again, gradually building the technique should pose no problem eventually, though don’t be surprised if you find you want to get back to it once your playing gets better, to perfect it.

Fear of the Dark

Of course, it’s here. It’s everywhere. It’s behind you, it’s when you’re searching for the light. The same technique for fast shredding bits is used in the song’s opening, which is why Fear of the Dark is widely recommended for guitar beginners to master.

After the short picking practice, you get into the alternate picking that’s not too hard to get into your pick hand, and the finger positioning on the neck is comfortable and reasonable. Beginners find it tricky to sweep the hand across the neck.

You may find that you get “stuck” in a riff position and play the riff one or two rounds longer and turn late for the rest of the riffs. No worries, this is natural. As you’re practicing, you’ll switch your focus from the left hand to the right and during this, you’ll forget about the other. It happens to everyone.

The trick is to take a break from playing along and let your brain and hand establish the technique solidly enough that it becomes their second nature. You’ll then have more than enough time to assemble the bits and play along for as long as you like.

Hallowed be Thy Name

Many will find it satisfying this song got into the list. I remember I was. Hallowed be Thy Name is sonically dynamic and crowded with instruments and what’s going on in the composition, and the guitar parts are carrying all this. However, they are not that big of a challenge thankfully.

In this song, you’ll get introduced to fingerpicking. The opening part is playing A and B, there are two degrees of separation in the neck fingers, and “dead” strings you don’t play at all between the two strings you do play.

This can be handled by careful three-string strums and harder mutes on the mid strings, though depending on the guitar you play, this can be picked by magnets and it may saturate the tone the way you don’t want it.

The right way is to sit and take a flamenco player position and start picking the strings with your palm and ring finger. You’ll notice the ring finger is a capricious bugger, but in time, it’ll start listening.

Time to practice some speed and flow. The trooper has a bit of a challenging opening that I played pretty clumsily in the beginning, so I took my time to premiere it in front of my friends. No worries. It’s far from insurmountable, but you have to practice.

Practicing hammers and pulls can be done by resting your pick hand, for the time being, turning the amp just a little louder, and hitting and pulling the strings only with your neck hand. The show-offs that do this well are showing off skill, okay, but they’re also showing you their secret practice routines – they’re good because they focused on that bit.

Another melodic song that’s easy to master and satisfying to play. It has more complexity and harmony than usual “galloping” Maiden songs and will challenge you to memorize the different bits and alternate between playing styles.

I liked playing the one-liners back in the day since they are easy to catch. If any one of you wanted to test your pitch, this could be the song to do it before checking the tabs.

The Number of the Beast

What can you say – legendary. Not only legendary in a sense of a song, but also in the sense that it brought so many players to the heights and brought the love for guitar closer to them.

The song consists of relatively stable neck hand positioning and easy rhythmical and alternate shredding, a short intermission with 6-riff licks, and a neat set of solos to spice things up.

The Number of the Beast is one of the more basic songs to play technique-wise and can really pump blood to the eardrums.