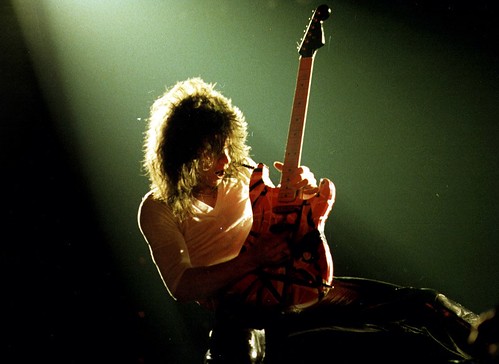 his famous solos on recordings such as Michael Jackson’s: “Thriller” or “Eruption,” guitar neophytes might think that the words ”Easy Van Halen Songs” can be nothing else but an oxymoron. However, after digging through a discography spanning—12 studio albums, two live albums, two compilation albums, and 56 singles—you might find lots of material that is beginner-friendly and easy to grasp.

Rising to fame in the 1980s, Van Halen enjoyed a bountiful musical career many of his contemporaries could only dream of. Unfortunately, after carving the way for a new era in rock music, Eddie passed away in 2020 at the age of 65. His legacy lives on through his contributions to music and countless fans and continues to inspire new generations to pick up the guitar and make some noise.

If you are one of the aforementioned guitar enthusiasts dreaming of shredding your guitar on stage with a crowd gasping at you in awe, here are some songs to help you get started on your way.

You might think there is no chance in hell you can pull this one-off, but if you can do a hammer-on, trust us, you got this. This is a great song if you want to get a grip on the two-handed tapping technique and one that is sure to make you look like a virtuoso with just a little bit of practice.

Another Van Halen classic, the famous automotive anthem, “Panama,” was recorded in 1983 and released a year later as a single. Besides being an awesome song, Panama also features an interesting backstory about the inspiration behind it.

After watching a drag race, singer David Lee Roth was so inspired by a car called “The Panama Express” that he decided to make a song about it. The result is this famous ‘80s hit song and a must-know classic for Van Halen fans.

The song features some strong guitar riffage that’s a great example of the Van Halen sound. Though it might sound daunting at first, the riffs are actually relatively easy to pick up and fun to play.

Probably the most famous and successful Van Halen song, Jump actually got to be number one on Billboard Hot 100 and helped get the band famous around the world. The main melody of the song is introduced on the keyboard as opposed to many other Van Halen songs, but it’s still interesting to play and it’s guaranteed to make crowds jump and go wild.

While you might want to stay away from the guitar solo, if you are a beginner, the core of the song is actually relatively easy to play, especially if you play the rhythm guitar since it features only a handful of chords.

A hit single from their debut album, Ain’t Talking About Love is one of the songs that every Van Halen fan should know. The guitar sound on this track is rather unique compared to many other Van Halen songs and at the time it made the song sound far heavier than most music of the 1970s era.

Though the song achieved great commercial success, Eddie himself kept it a secret for a full year before sharing it with a band since he felt it didn’t have lots of potential. After hearing the powerful riffs, David Lee Roth penned down the now-famous lyrics and the world was blessed with another hit song.

Though the song takes some practice to master, it features only two chords so you can play an easy version almost instantly. Of course, with some practice, you can start grasping the different accents and tricks that make the song what it really is.

Coming from their 1981 album “Fair Warning,” the song Unchained is often cited by the band as one of their favorites which they often played live for audiences around the globe. The official video for the song is also a live recording of their performance which the band loved so much that they decided to do more videos like it in the future.

The song itself is characterized by David Lee Roth’s singing and Eddie’s repeating riffs so it shouldn’t be too hard to play. It features lots of power chords and a drop-D tuning so make sure to tune our guitar properly if you want to go for that original tone.

The last song featuring the original Van Halen lineup is the one that perfectly encapsulates the essence of Van Halen.

Starting with an amazing drum solo by Alex, the song continues with a solo by Eddie which introduces the main theme of the track. The main riff itself is heavy and powerful, and it’s everything you’d expect from Van Halen.

Learning to play the song as Eddie does is probably going to be a challenge for many guitar players without many hours of practice under their belt, but luckily the song can be watered down and played with easier chords without compromising its sound too much. Bottom line, it’s a great track to help you hone your shredding skills.

While it might take you years of practice before you can copy Eddie’s sound perfectly, try to remember that everyone including Eddie was a beginner at some point in their life. While learning these songs won’t get you in the Rock’n’Roll hall of fame, it sure will help you increase your guitar playing skills and have some fun while you’re at it, without the hassle of practicing scales for hours on end. Good luck!