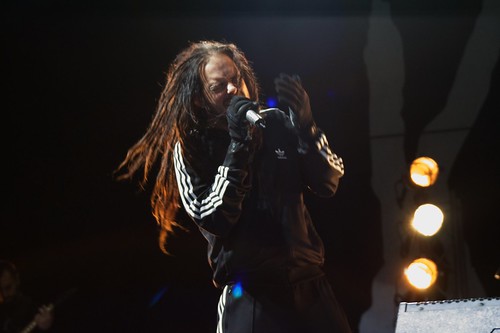 Photo by Mike Murga / CC BY

from Bakersfield, California, Korn is one of the most influential metal bands of our time and also brought nu-metal into the mainstream. It’s is one of those bands that just might be impossible to accurately describe to someone who’s never even heard of them since their musical style is so innovative.

Putting a label on Korn is something that has been a subject of many debates among loyal fans. As one author describes it, Korn is a basket-case full of contradictions, and that might be the best definition of Korn sound anyone could give you. They are known for harsh riffs, groovy rhythms, and various squeaky guitar noises that guitarists Brian Welch and James Schaffer are known for.

With this being said, Korn songs aren’t that technically demanding. If you can work your way around a few scales, you won’t have too much trouble with playing those nasty, biting riffs Korn is known and loved for. What might prove to be difficult though, when you try to play Korn is to get that guitar tone.

Korn is one of the first bands that started using 7-string guitars and even down-tuned those by two half-steps for most of their records. With this in mind, you might want to consider buying a new set of strings with an extra low gauge. If tuning as low as A1 proves to be too much of a challenge, fret not. Many Korn songs sound just as heavy even in drop-c or drop-d tuning. So without further ado, here are some popular Korn songs you could try as a beginner.

Coming from their 2002 Grammy-winning album, Untouchables, Here to Stay is one of my personal favorites and a great example of why you should get a set of strings with a really low gauge. The song itself is pretty simple with two main riffs to worry about, both of which are really easy to play. Take a look at some tabs and you should be grooving within minutes. The chorus is focused on power chords supporting the vocal line and it’s very melodic and fun to play.

Another nu-metal hit song coming from the early 2000s is Right Now. The song features one of the most famous Korn riffs and is one of the main reasons why many people got into nu-metal. The riff itself isn’t too hard either, if you can play the entry song on this list, you’ll have no problems with this one either. Besides the main riff, the guitar mostly follows the bass section, with the exception of the break section toward the end of the song which features another easy riff.

When Will This End

Another super fun song to play is When will this End from their 2003 record: Take a look in the Mirror. Though the main riff is a little bit harder than the first two entries on this list, the practice is well worth the reward. When will this end is a heavy tune that is bound to make heads spin if you happen to play it live with your band so be sure to check it out.

KORN - When Will This End - Drum Cover

One of Korn’s biggest hits so far is certainly Coming Undone from their seventh studio album, See You on the Other Side, released in 2005. The song might prove hard to play without a proper set of strings so be sure to tune low when you try this one. Other than the tuning, the song has two important riffs to look out for and if you got the hang of the other songs on this list, this one won’t be a bother either.

Another song from their 2005 release, Twisted Transistor is massively fun to play. While most bands shy away from it because of the intro which heavily relies on samples and effects, the song itself features a few riffs that are easy to learn if you invest a little time into practice. While the song is a bit harder than the previous ones on this list, the riffs are not too much to handle when you tackle them on separately at first.

One of the most famous Korn songs ever, Y’all Want a Single achieved great commercial success despite being an obvious critique of the commercial music industry in general. Lyrics aside, Y’all Want a Single is one of the easier Korn songs to play since it only features two riffs, both of which should be child’s play if you could play any of the previous songs on this list.

Though it will have you practicing a little bit more than the other songs on the list, Thoughtless is definitely worth it. The song sounds massive when played correctly and features one main riff and a few others that are comparatively easier to play. So grab your guitar, tune down and start banging.

Another one for working out those fingers is Make Me Bad from their 1999 album Issues. The main riff is relatively easy to play, and should you have any troubles you could simply consult some tabs and rock. The chorus is super melodic and fun to play, so make sure to try this one out too.

One of the harder songs on this list is Somebody Someone but that doesn’t mean you could not play it if you invest an hour or two into practicing it. It features 3 important riffs to pay attention to, all of which are incredibly fun to play. The break section at the end is one of the nastier nu-metal breaks too.

Korn - Somebody Someone (Official HD Video)

As you could probably see by now, Korn doesn’t focus on virtuosic technique or anything like that. Playing Korn right takes a little practice, good string, and a strong attitude. Compared to most metal bands out there, though, Korn is actually quite easy to play. Good luck!